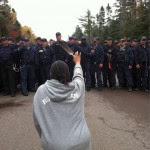 A message from the HWY 11 Land Defenders:

“We are not giving up despite these harsh weather conditions, sacrificing time with our families, our jobs, our homes, not only to protect land, water and people but to ensure a brighter future for the next 7 generations. We are asking for more support, through road blocks to be in solidarity. This is not just an Elsipogtog issue, this is a global issue and we need to raise awareness. Show us support any way possible, sending thank you’s, road blocks, banners, even dropping by, all and every type of support is appreciated.”

The 3rd encampment in Mi’kmaq Territory, at HWY 11, which saw stand off’s between the Mi’kmaq peoples protecting the water and RCMP protecting corporate interests, is requesting widespread global support.

The Provincial Court of New Brunswick has approved an injunction which names 5 people, including “Jane” and “John Doe”, to target the HWY 11 encampment. This encampment has successfully turned away SWN vehicles and is preventing SWN from conducting seismic testing on unceded Mi’kmaq lands. Each day that SWN cannot conduct its testing, it costs the company $54, 000. SWN is once again looking to the RCMP to enforce the injunction most recently granted. At this time, the RCMP have used the injunction to target the Mi’kmaq and have set up a “check point” on HWY 11, where the RCMP stop vehicles to arrest passengers and drivers at their whim.

We remember the last time the RCMP enforced an injunction against the Mi’kmaq people. As seen historically, the RCMP will continue to enforce the violation of treaties and attack Indigenous self-determination. At this time, the RCMP are not only harassing Mi’kmaq Land Defenders and non-Native supporters, but continuing to throw them in jail. On Thursday, November 28th the Mi’kmaq again turned SWN away – declaring another day of victory. They are standing up against brutal police repression, and continued theft of Indigenous lands and ongoing colonization. Show them they are not alone!

On Monday Dec. 2nd HWY 11 Land Defenders are asking you to show your solidarity by taking action in your community. Where possible, highway shutdowns are encouraged however any action of support, such as banner drops, are welcome.