US warplanes defy Chinese air defence rules with B-52 flyover of disputed area
• B-52 bombers 'not armed' over Senkaku Islands, US says
• US previously rejected expansion as 'provocative' 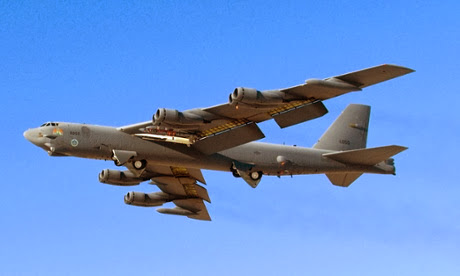 US warplanes have directly challenged China’s claims of an expanding territorial air defense zone, flying dramatically and without incident on Monday over a disputed island chain.

The incursion comes on the heels of a scathing statement over the weekend by defense secretary Chuck Hagel rejecting the expansion of the Chinese air defense zone into the East China sea as a provocative threat to regional stability.

But the Pentagon insisted Tuesday that the overflight was not a reaction to the Chinese declaration.

Lieutenant colonel Tom Crosson, a Defense Department spokesman, said the planes were not armed and flew “as part of a long-planned training sortie”. The Chinese did not in any way attempt to challenge the planes’ flight, Crosson said, nor did the pilots announce themselves to any Chinese authorities.

Crosson said the Pentagon had yet to receive a message from China in response to the overflight.

“You’ll probably hear a lot of boisterous statements out of China that it’s a provocation,” said Nick Szechenyi of the Center for Strategic and International Studies.

While US navy ships frequently traverse the Taiwan Strait, it is extremely rare for the US military to issue a blatant show of force near Chinese-claimed territory. For years, the Pentagon has argued unsuccessfully for a direct military-to-military communications channel to prevent potentially catastrophic misunderstandings in the region.

As first reported by the Wall Street Journal, the US air force flew what it said were a pair of B-52 bombers from an airbase on Guam over what China calls the Diaoyu Islands and what Japan calls the Senkaku Islands. Both nations claim the chain, as well as oil and gas fields nearby, and both nations have harassed each other’s nationals, at sea and in the air, over perceived disruptions in the status quo.

But China’s Saturday declaration that it had expanded its air defense zone into the East China sea – with its attendant implication that China will shoot down unauthorized aircraft – was met with scathing condemnation from Hagel.

“We view this development as a destabilizing attempt to alter the status quo in the region,” Hagel said in a statement over the weekend. “This unilateral action increases the risk of misunderstanding and miscalculations.”

Hagel warned China that US military operations in the western Pacific would “not in any way change”. The flight of the air force planes, even if they were on a long-planned training mission, is the first clear demonstration of Hagel’s declaration.

Crosson did not describe the training mission beyond saying the two planes flew from Guam and back.

“This was not a reaction” to China’s expansion of its air defense zone, Crosson said.

It is unclear whether China will view it that way. The Chinese foreign ministry on Monday condemned Hagel’s remarks as “irresponsible”.

The rise of China as a regional military heavyweight has long preoccupied the Pentagon, which has routinely stated sees China as a potential partner. The former chairman of the Joint Chiefs of Staff, Admiral Mike Mullen, implored China to no avail to establish a direct communications channel between the two militaries to ward off potential misunderstandings.

China is expected to participate in a major Pacific wargame alongside the US navy and its regional allies next year. China said in March that it would take part in the Rim of the Pacific exercises for the first time, seemingly auguring closer US-Chinese military ties.

Szechenyi, of the Center for Strategic and International Studies, looked back to the 1996 “Taiwan Strait Crisis”, in which the US sent two aircraft carriers to the Taiwan Strait following a series of Chinese military escalations, as a recent analogue.

“The US has stated repeatedly that it would not accept any unilateral actions that attempted to alter the status quo and this was interpreted very quickly a such an act,” he said.

“Engagement with China is very important to assure China its rise is welcome, but on the flip side, you have to dissuade China from taking potentially destabilizing actions.”

Posted by seemorerocks at 12:59