Botswana Secretly Fracks World’s Second-Largest Wildlife Preserve After Kicking Out The San People
Botswana has been getting fracked for years without the public knowing, even in the Central Kalahari Game Reserve, ancestral home of the San people and second-largest wildlife reserve in the world. 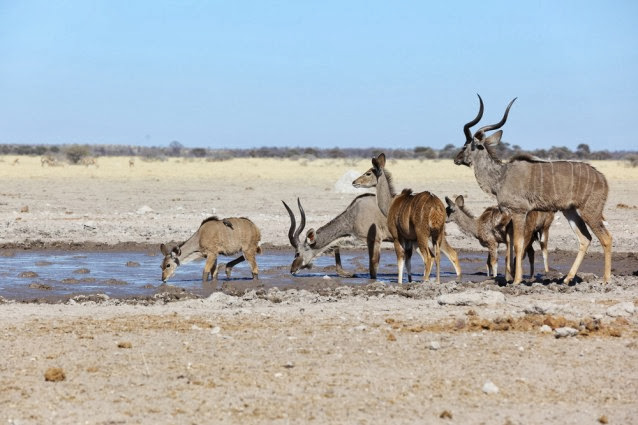 
The Open Society Initiative for Southern Africa (OSISA)’s film, The High Cost Of Cheap Gas, contains footage of fracking equipment and energy company employees describing their work as “fracking”. A news release on Kalahari Energy’s website talks about hydraulic fracturing operations in Botswana that began as early as 2009 to extract coal bed methane. And a 2005 post on the site found by the Daily Maverick’s Rebecca Davis talks about the construction of water evaporation ponds “for hydraulic fracturing of the wells.”

A government map of oil and gas concessions indicate the coal bed methane concessions exist in the Cental Kalahari Game Reserve, the Kgalagadi Transfrontier Park, and the Chobe National Park, home to the world’s largest herd of elephants.

Keikabile Mogodu, a San rights advocate, told The Guardian that nobody had heard anything from companies or the government about fracking on San land.

“We are in the dark,” he said. “If fracking is done in the areas where people are consultations should be done.” Botswana President Ian Khama’s government has been fighting in court to keep San people from returning to their land, and it seems this may be why.

Extracting coal-bed methane is a particular problem for Botswana, which is currently in the midst of a historic drought and massive crop failure. Fracking is highly water-intensive. In New Mexico, drought-stricken as well, drilling operations drained the state‘s already-threatened water tables, potentially returning poisoned wastewater into the system. And fracking has been found to pollute nearby wells with methane.

Tens of thousands of elephants — Africa’s largest elephant population — live in areas being drilled in Botswana, dependent on water from boreholes that could become contaminated. A study of cows exposed to fracking-polluted wastewater found consequences ranging from near-immediate death to stillbirths and genetic defects in offspring that persisted for years.


The Botswana government insists that any coal bed methane prospecting doesn’t involve fracking. Government spokesmen Jeff Ramsay said in a statement that “There are currently no fracking operations going on in the country, except exploration,” which would presumably turn into active extraction. The statement continued by saying that if any hydraulic fracturing is taking place, it isn’t permitted, and is therefore against Botswana law
Posted by seemorerocks at 12:37