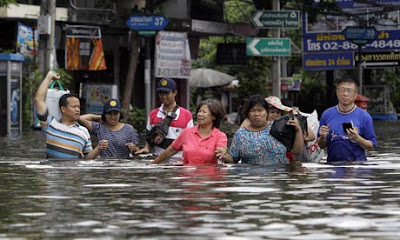 Peak tides tested Bangkok's flood defenses on Sunday as hope rose the center of the Thai capital might escape the worst floods in decades, but that was little comfort for swamped suburbs and provinces where worry about disease is growing.
The floods have killed at least 381 people since July and affected more than 2 million. Authorities have slashed growth forecasts for Southeast Asia's second biggest economy and disruptions to auto and computer-part producers have been felt worldwide.
Water flowing down the central Chao Phraya river basin from the north is meeting peak tides surging in the Gulf of Thailand, 20 km (12 miles) south of Bangkok, leading to fears the city's makeshift defenses would be swamped.
The tides have pushed water in the river, which snakes its way through the city past gilded temples and wooden shanties, about 2.5 meters (8 feet) above sea level but dikes and sand-bag walls have largely held.
For article GO HERE
Thai floods spark fear of disease and crocodiles
From AFP
Posted by seemorerocks at 18:07