I am away for 48 hours so unable to give full coverage to the ongoing collapse of Europe. Back on Sunday, NZ time.


This is how our idiot media reported events in Europe
NZ dollar surges on euro debt deal
Stuff,
28 October, 2011
The New Zealand dollar climbed to a month high against the US currency as news of the European debt deal saw demand for growth-linked assets surge, with commodities, equities and the euro leading the charge.
The kiwi dollar recently traded at US82.03 cents, up from 80.48c yesterday, and rose to 70.31 on the trade weighted index of major trading partners' currencies from 69.71.
Late yesterday, European officials announced that they had reached a final agreement on the euro zone rescue plan after much to-ing and fro-ing between officials.
The key highlights of the package include raising the capital requirements of private sector banks, leveraging the 440 billion euro bailout fund to 1 trillion euro, handing a "voluntary" 50 per cent haircut on Greek bondholders, and an agreement to discuss treaty changes to tighten economic controls in the euro zone.
For article GO HERE
Written 24 hours previously no doubt - but a more realistic appraisal here from Mish Shedlock and Ambrose Evans-Pritchard of the Telegraph 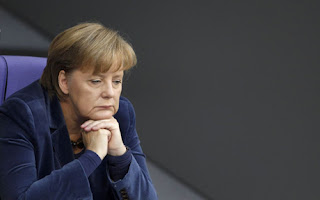 Grateful for idiocy, a pack of lies, finacial engineering, legerdemain, and trickery: Opposition leader rebukes Merkel’s lies and arrogance of power
Mish's Global Economic Analysis
A few weeks ago everyone knew German Chancellor Angela Merkel lied about leverage to the German Parliament. Nonetheless, and disgustingly, this morning the Bundestag was all too willing to Approve a "Blank Check" for Unlimited EFSF Leverage.
For this, Ambrose Evans-Pritchard says Thank you Germany
Alone among EU leaders, Chancellor Angela Merkel goes to tonight’s summit in Brussels with an iron-clad mandate. It is a remarkable moment. Never before – to my knowledge – has a national parliament demanded and held a prior vote on an EU summit accord.
Had this principle been established a long time ago, we might have avoided much of the relentless Treaty creep and EU aggrandizement advanced by secret deals at the Bâtiment Justus Lipsius. Thank you Germany.
Thank you too, judges of the Verfassungsgericht, for giving the Bundestag a veto on EU encroachments on fiscal sovereignty. The court is seemingly the only tribunal willing and able to defend the liberties of European citizens against EU over-reach, and is therefore my supreme court too even as a British citizen.
Opposition Leader Rebukes Merkel's Lies and Arrogance of Power
Pritchard continues ....
Dr Merkel has won her vote. She secured an "own majority" for proposals to leverage the €440bn bail-out fund (EFSF) into the stratosphere, with the support of some very sheepish looking law-makers from posturing Free Democrats and Bavaria’s Social Christians.
But what a price she paid. The credibility of her team is shattered. Europe has all but destroyed her, even if she manages to limp on to the next crisis.
As she glowered darkly, speaker after speaker from the Social Democrats (SPD), the Greens, and Die Linke, asked how she could possibly reconcile her plan to leverage the EFSF to €1 trillion or €1.5 trillion (we still don’t know how much) with solemn pledges to the Bundestag just three weeks ago that there would be no such leverage.
"Shameless abuse of the truth," was the verdict of SPD leader Frank-Walter Steinmeier. The government had acted "tactically" at every turn, "misled the people", "held back information", "crossed every red line", brought Europe "to its knees" with botched policies, and lied blatantly about EFSF leverage.
"You came here to say there would be no leverage, not three years ago, not three months ago, but three weeks ago. You denied everything."
Die Linke (Left) leader Gregor Gysi was electrifying. "It is the arrogance of power," he began, and never let go.
"Every week you come up with a different story about this crisis."
"We were told there would be no leverage and you have reversed everything in a matter of weeks. Now we learn that the 20pc loss will fall entirely on taxpayers. They alone will pay. That is the decision you are taking."
"Why don’t you tell German taxpayers the truth? They are being asked to pay the losses for French banks."
Green leader Jürgen Trittin rebuked Dr Merkel for hiding the true implications of EFSF leverage, particularly the plan to insure the first 20pc of losses on Club Med bonds.
"Why are you shying away from telling the people the truth? You must tell people what this leverage means. You must explain to them what the risk is, and why it is necessary. But you wriggled out of it."
"You came here three weeks ago and said there would be no leverage. This is the sort of thing that unnerves people."
And so it went on, raw red-blooded democracy.
The unpleasant truth is that the EFSF leverage proposals are idiotic, the worst sort of financial engineering, legerdemain, and trickery.
Grateful for Idiocy, a Pack of Lies, Financial Engineering, Legerdemain, and Trickery
Other than the ruling by the German Supreme Court there is nothing to be grateful for. The "unpleasant truth" is Merkel lied to parliament about leverage, which is why the EFSF was approved in the first place. Having secured passage of the EFSF via bald-faced lies, the Bundestag ignored the lies and approved a blank check on the amount of leverage and the method of leverage.
Pritchard notes the EFSF leverage proposals are idiotic, the worst sort of financial engineering, legerdemain, and trickery" and for that he says "Thank you Germany".
Posted by seemorerocks at 09:33