It looks as if things are falling apart rapidly in Europe.
EU leaders tell Italy: stop the rot and get your house in order
Pressure on Silvio Berlusconi to bring country's debts under control as Europe fears another deep-rooted recession 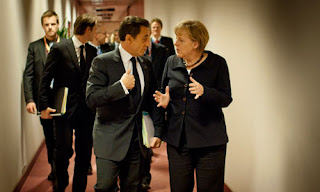 'Merkozy'
the Guardian,
23 October, 2011
The eurozone's two biggest powers, Germany and France, on Sunday launched an unprecedented attack on Italy to stop the rot by taking far more radical measures to reform its economy and get its debts under control.
The German chancellor, Angela Merkel, and Nicolas Sarkozy, the French president, held a series of face-to-face talks with the Italian prime minister Silvio Berlusconi – who was then subjected to a roasting at the hands of other European leaders who are worried that the EU as a whole is on the verge of another deep-rooted recession.
The onslaught on Berlusconi, now viewed as a liability across the whole of Europe, came as a fractious summit of the 27 members of the EU ended and an equally stormy eurozone summit began with no agreement on all three core elements of a package to solve the sovereign debt crisis and restore market confidence.
France retreated on its demands for the key part of the three-pronged package, dropping its plan to boost the €440bn firepower of the main bailout find, the European Financial Stability Facility (EFSF), by turning it into a bank in the face of German, Dutch and Finnish intransigence.
All 27 EU leaders approved a deal reached on Saturday night by finance ministers to enable a €108bn recapitalisation of European banks to go ahead, with the final details due to be settled at a second summit on Wednesday.
EU leaders had prepared markets last week for a lack of concrete news from this weekend's summit but even so analysts were braced for further volatile trading on Monday morning.
As private creditors held secret talks with EU, International Monetary Fund and European Central Bank officials about writedowns to Greek debt, a report showed this was now unsustainable because of the worsening economic and social situation. Bondholders reportedly offered to increase their voluntary writedowns to 40% – almost double the 21% offered in the bailout of Greece in July.
European council president Herman Van Rompuy said of talks with Berlusconi: "We asked for reassurances regarding the courageous measures that have been taken and we asked for them to be put into effect and also for reforms: reforms on the labour market, public enterprise, privatisation, the judicial system, combating fiscal fraud and we wanted to make sure that everything will be implemented in time.
"Clearly we are calling for a major effort to be made by the Italian authorities and I believe that they are willing to do that," he added.
Van Rompuy stressed, amid tensions between France and Germany, "that we are working in a spirit of compromise".
David Cameron said the eurozone crisis was having "a chilling effect" on the rest of Europe and said more progress was needed, but indicated that the 17 eurozone leaders were moving towards a package to put the euro on a more stable footing.
Sarkozy, concerned about losing France's AAA credit rating, admitted that he failed to win German approval for his preferred plan to allow the EFSF to become a bank and effectively borrow from the European Central Bank.
Germany ruled out such a move but instead endorsed an option to guarantee the first part of losses on new issues of bonds by Spain and Italy. This could either be achieved by offering straightforward insurance or, in an alternative gathering more support on Sunday night, using insurance to attract or lever up bigger amounts of private and public investment. Sovereign wealth funds from Asia and the Gulf, including China, could be tapped, along with the IMF.
EU-27 summit conclusions indicated this option might win the day: "The G20 should ensure that the IMF has adequate resources to fulfil its systemic responsibilities and should explore possible contributions to the IMF from countries with large external surpluses". Berlin is especially favourable towards this idea.
"No solution is viable if it doesn't have the support of all the European institutions," Sarkozy said.
An announcement about a €100bn or so recapitalisation plan to raise banks' capital ratios to 9% – higher than the 6% that was deemed to be enough to pass the July stress tests – is promised for Wednesday.
"Everybody agrees we need a coordinated scheme to recapitalise the banks and improve funding," said Van Rompuy.
Much depends on the size of the losses that banks take on Greece debts. There is now speculation that the writedown could be up to 60%. There was said to be some disagreement on Sunday between the authorities and the private sector holders of the bonds, largely the banks themselves.
Italian, Spanish and Portuguese banks could be hardest hit by both these plans and have put up stiff resistance. But no UK banks are affected by the recapitalisation deal which is designed to protect banks from wider contagion issuing from Greece. Greece could face accumulated capital requirements of €252bn by the end of the decade and a debt to GDP ratio of 186% unless writedowns can be agreed this week.
The European Banking Authority, the pan-European regulator, is thought to be preparing to publish the capital requirements in a breakdown by country, rather than individual bank, once the extent of the Greek "haircut" is determined.
Some analysts are concerned that banks may make efforts to plug any gaps in their capital by reducing the size of balance sheets – by scaling back on lending, for instance – to avoid having to take government support. But this might have the impact of further hampering the growth of European economies. 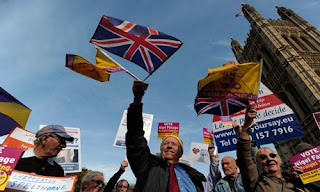 the Guardian,
24 October, 2011
Conservative rebels pushing for an in-or-out referendum on Europe are riding the tide of public opinion, according to a Guardian/ICM poll. Some 70% of voters want a vote on Britain's EU membership, and by a substantial nine-point margin respondents say they would use it to vote for UK withdrawal.
Forty-nine per cent of voters would vote to get Britain out of Europe, as against just 40% who prefer to stay in.
For article GO HERE
Posted by seemorerocks at 05:53