A Greek Trader Tells Us The State Of Things, And Explains Why The Worst Is Yet To Come 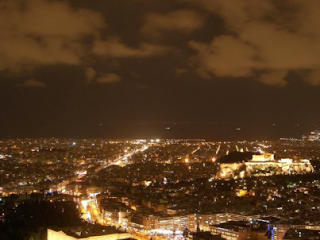 Business Insider,
24 October, 2011
A trader in Greece relays the mood to us. Basically: The painful part of austerity hasn't even hit yet, nobody in Europe has any idea what's going on, and social strife, if it seems bad now, will become a daily issue.
----------
All is as well as can be, under the circumstances.
The decisions that will announced this coming Wednesday probably, will be critical to forming the sociopolitical and economic background for the next year or so. Meantime, keep in mind that most recent govt decisions and measures, including those voted for this past Thursday, have not yet been implemented.
Even the additional taxes on income and property that have been levied, have in large part not yet been invoiced due to apparent software glitches related to printing the relevant forms.
In that respect, the social turmoil that we are currently observing relates mostly to announcements alone, so far. Over the next few months, these announcements will have to be implemented. The additional taxes will have to paid, state / public workers will actually be laid off. Unemployment in the private sector continues and will continue for the foreseeable near term at least, to increase. Incomes are being cut both in the public sector and now also in the private sector as labor market rigidities in the legal framework are being substantially reduced, labor unions are marginalized and tax laws are revised and extended. Pensions have already been significantly reduced and will most probably be reduced even further.
The impact of most of what I have noted above is only now just beginning to be felt. The actual implementation of these changes, is mostly still ahead of us and they will gradually be enforced over the next 6 months or so, as the ''internal devaluation'' concept is actually implemented.
One can only reasonably expect, therefore, that social tensions and revolt will increase as what today still remains merely expectations stemming from govt announcements, turn into daily reality. Obviously, no one can yet predict or foresee what the end game will be. I doubt whether even the leading European policy makers have a clear picture of the path to the crisis resolution. Everybody concerned seems
to be improvising and to be engaged in some kind of erratic trial and error proceedings.
Unfortunately, I do not think that anybody today can be anything but pessimistic regarding the near to medium term future. Meantime we hope for the best, while preparing for the worst.
Posted by seemorerocks at 13:09