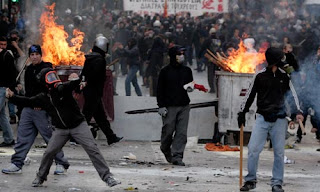 
Greece’s attempt to reform itself was marked by death, violence and chaos as mass demonstrations against austerity measures demanded in return for international aid were eclipsed by fierce fighting outside the Athens parliament.
As lawmakers debated the package of job and spending cuts, which was approved on Thursday night, a trade unionist died in clashes only metres away. The man, identified as Dimitris Kotsaridis, a 53-year-old construction worker, was pronounced dead shortly after being tear-gassed in running battles between rival groups that were eventually broken up by police.
"Enough is enough, society is despairing, the country is collapsing," said MP Vasso Papandreou, giving voice to widespread fears that Greece is on the verge of imploding. "I will vote in favour [of the measures] but this is the last time. I am struggling with my conscience," added the deputy, a prominent member of the ruling Pasok party, although no relation to prime minister George Papandreou.
The EU and the International Monetary Fund (IMF), which have been keeping Greece afloat with funds drawn down from a €110bn bailout put together in May 2010, have said that without the new package of cuts and tax increases, further aid will be withheld. But with the governing socialists divided over the cutbacks, following a relentless wave of similar measures that have thrown Greece into deep recession, the debate inside the 300-seat house was unusually heated.
After voting against a measure abolishing collective wage agreements, Louka Katseli, the former Pasok economy minister, was reportedly expelled from the ruling party.
Outside the parliament, in Syntagma Square, 80,000 protesters had gathered in bright sunshine to denounce the policies, before the area was turned into a war zone.
In scenes not seen since the collapse of military rule, Greeks turned on Greeks, with some throwing petrol bombs and rocks, others wielding wooden batons and clubs.

For article GO HERE
Posted by seemorerocks at 10:34