Greece: Trash, Transportation Is A Nightmare And Everyone's Trying To Flee

This is what the early stages of collapse are like. 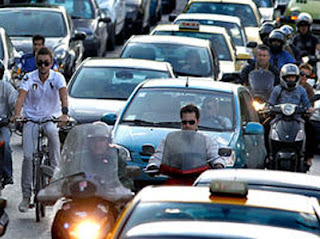 Catherine Darzenta, an English teacher and owner of a language school in Athens, sends this impassioned plea:

“I live in chaos. Chaos is a Greek word and aptly describes life in this country. I have been a good citizen of this country and have worked hard in the 25 years that I have lived here. I work from 2pm to 10pm daily. I put in 40 teaching hours per week. If you add the lesson planning and marking it's nearly 50 hours per week. I only see my husband for half an hour a day as he teaches in a state school in the morning but because his salary is so low he needs to supplement his income in the evenings. How many of our European colleagues work so many hours?
I teach English. Fortunately even during this recession there is a demand for my work. But for how long will people have enough money to pay me to teach their children? When a mother comes telling me that her husband lost his job and her salary has been slashed and she is forced to feed her children potatoes and rice, I cave in and teach her children for free.
Two days ago I heard about my daughter's physics teacher, a father of three young children who gave up and emigrated to Germany to work in a restaurant. A physicist is working as a waiter somewhere in Hamburg.
The Australian embassy is flooded with Greeks applying to emigrate to Australia because the unemployment rate here is well over 25%. My father emigrated to Canada in 1952, when Greece had been completely devastated following World War Two and a civil war. There was no work, there was great poverty so workers emigrated to the US, Canada and Australia in droves.
Nowadays intellectuals and professionals are the ones who are emigrating. My children are at university. My son is studying engineering at the Athens Technical University. The president of the university informed the students that the university may close down in January due to a lack of funds. Why are we destroying our children's hopes and dreams?
Now my children may have to emigrate to Canada just as their grandfather did 50 years ago. Why should a young person feel that he must leave his homeland in order to have a decent future?”
I can't get to work easily most days because public transport is usually on strike three days every week. The streets are piled high with rubbish.
A national melancholy prevails and chemists can't get enough anti-depressants to sell. Heart-related illnesses are on the rise and the suicide rate has gone up by 40%. We have lost all hope. We all know that things will not get better. Everybody knows that things will continually get worse. We just aren't sure to what extent yet.
We are angry at our government (all governments past and present) for not protecting us. After I paid my income tax in July, I suddenly received a piece of paper that didn't even look official. It was just a photocopy asking me to pay an emergency tax. It was named emergency solidarity tax.
Who am I supposed to feel solidarity to? What is this tax that I am being asked to pay? Why do I have to pay an extra €300 for my small business? Isn't the income tax I paid enough? Where are my tax euros going? To German banks?
Many Greeks have refused to pay tax because they know they will get nothing in return. They know they will have to pay to educate their children, they will have to pay for medical care and to use public roads. So what is the point?
Posted by seemorerocks at 10:30