An important article for understanding collapse.

Comments from Mike Ruppert -
“Derivatives have always been at the core of the problem. As an inverted pyramid of debt it was possible to create them in the Ponzi scheme of infinite growth only as long as resources could be pulled out of the ground fast enough to show that there were enough people getting paid to encourage other to buy and expand the bubble. It has always been the implosion of the derivatives bubble that would make the official collapse of civilization. I warned of that in my first-ever economic alert on Sept. 9, 2001. It had become clear then that a major stock market crash (in 2001 terms) was imminent. That crash did occur two days later on Sept. 11th. But it was attributed to the attacks on the World trade Center.
Although difficult to conceive for most, what this says is that the Financial Powers That Be have known full well that this day would comes and that every illegal, dishonest, crooked step taken since then has been designed to keep the criminal enterprise sucking wealth for as long as possible... until now”. -- MCR 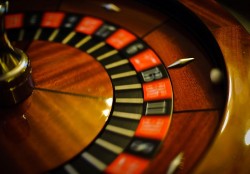 Zero Hedge
Courtesy of Michael Snyder of Economic Collapse
Most people have no idea that Wall Street has become a gigantic financial casino. The big Wall Street banks are making tens of billions of dollars a year in the derivatives market, and nobody in the financial community wants the party to end.
The word "derivatives" sounds complicated and technical, but understanding them is really not that hard.  A derivative is essentially a fancy way of saying that a bet has been made.  Originally, these bets were designed to hedge risk, but today the derivatives market has mushroomed into a mountain of speculation unlike anything the world has ever seen before.  Estimates of the notional value of the worldwide derivatives market go from $600 trillion all the way up to $1.5 quadrillion.
Keep in mind that the GDP of the entire world is only somewhere in the neighborhood of $65 trillion.  The danger to the global financial system posed by derivatives is so great that Warren Buffet once called them "financial weapons of mass destruction".  For now, the financial powers that be are trying to keep the casino rolling, but it is inevitable that at some point this entire mess is going to come crashing down.  When it does, we are going to be facing a derivatives crisis that really could destroy the entire global financial system.
Most people don't talk much about derivatives because they simply do not understand them.
Perhaps a couple of definitions would be helpful.
The following is how a recent Bloomberg article defined derivatives....
“Derivatives are financial instruments used to hedge risks or for speculation. They’re derived from stocks, bonds, loans, currencies and commodities, or linked to specific events such as changes in the weather or interest rates”.
The key word there is "speculation".  Today the folks down on Wall Street are speculating on just about anything that you can imagine.
The following is how Investopedia defines derivatives....
“A security whose price is dependent upon or derived from one or more underlying assets. The derivative itself is merely a contract between two or more parties. Its value is determined by fluctuations in the underlying asset. The most common underlying assets include stocks, bonds, commodities, currencies, interest rates and market indexes. Most derivatives are characterized by high leverage”.
A derivative has no underlying value of its own.  A derivative is essentially a side bet.  Usually these side bets are highly leveraged.
At this point, making side bets has totally gotten out of control in the financial world.  Side bets are being made on just about anything you can possibly imagine, and the major Wall Street banks are making a ton of money from it.  This system is almost entirely unregulated and it is totally dominated by the big international banks.
Over the past couple of decades, the derivatives market has multiplied in size.  Everything is going to be fine as long as the system stays in balance.  But once it gets out of balance we could witness a string of financial crashes that no government on earth will be able to fix.
The amount of money that we are talking about is absolutely staggering. Graham Summers of Phoenix Capital Research estimates that the notional value of the global derivatives market is $1.4 quadrillion, and in an article for Seeking Alpha he tried to put that number into perspective....
If you add up the value of every stock on the planet, the entire market capitalization would be about $36 trillion. If you do the same process for bonds, you’d get a market capitalization of roughly $72 trillion.
The notional value of the derivative market is roughly $1.4 QUADRILLION.
I realize that number sounds like something out of Looney tunes, so I’ll try to put it into perspective.
$1.4 Quadrillion is roughly:
-40 TIMES THE WORLD’S STOCK MARKET.
-10 TIMES the value of EVERY STOCK & EVERY BOND ON THE PLANET.
-23 TIMES WORLD GDP”.
It is hard to fathom how much money a quadrillion is.
If you started counting right now at one dollar per second, it would take 32 million years to count to one quadrillion dollars.
Yes, the boys and girls down on Wall Street have gotten completely and totally out of control.
In an excellent article that he did on derivatives, Webster Tarpley described the pivotal role that derivatives now play in the global financial system....

Far from being some arcane or marginal activity, financial derivatives have come to represent the principal business of the financier oligarchy in Wall Street, the City of London, Frankfurt, and other money centers. A concerted effort has been made by politicians and the news media to hide and camouflage the central role played by derivative speculation in the economic disasters of recent years. Journalists and public relations types have done everything possible to avoid even mentioning derivatives, coining phrases like “toxic assets,” “exotic instruments,” and – most notably – “troubled assets,” as in Troubled Assets Relief Program or TARP, aka the monstrous $800 billion bailout of Wall Street speculators which was enacted in October 2008 with the support of Bush, Henry Paulson, John McCain, Sarah Palin, and the Obama Democrats.
Most people do not realize this, but derivatives were at the center of the financial crisis of 2008.
They will almost certainly be at the center of the next financial crisis as well.
For many, alarm bells went off the other day when it was revealed that Bank of America has moved a big chunk of derivatives from its failing Merrill Lynch investment banking unit to its depository arm.


So what does that mean?
An article posted on The Daily Bail the other day explained that it means that U.S. taxpayers could end up holding the bag....
“This means that the investment bank's European derivatives exposure is now backstopped by U.S. taxpayers. Bank of America didn't get regulatory approval to do this, they just did it at the request of frightened counterparties. Now the Fed and the FDIC are fighting as to whether this was sound. The Fed wants to "give relief" to the bank holding company, which is under heavy pressure”.
This is a direct transfer of risk to the taxpayer done by the bank without approval by regulators and without public input.
So did you hear about this on the news?
Probably not.
Today, the notional value of all the derivatives held by Bank of America comes to approximately $75 trillion.
JPMorgan Chase is holding derivatives with a notional value of about $79 trillion.
It is hard to even conceive of such figures.
Right now, the banks with the most exposure to derivatives are JPMorgan Chase, Bank of America, Goldman Sachs, Citigroup, Wells Fargo and HSBC Bank USA.
Morgan Stanley also has tremendous exposure to derivatives.


You may have noticed that these are some of the "too big to fail" banks.
The biggest U.S. banks continue to grow and they continue to get even more power.
Back in 2002, the top 10 U.S. banks controlled 55 percent of all U.S. banking assets.  Today, the top 10 U.S. banks control 77 percent of all U.S. banking assets.
These banks have gotten so big and so powerful that if they collapsed our entire financial system would implode.
You would have thought that we would have learned our lesson back in 2008 and would have done something about this, but instead we have allowed the "too big to bail" banks to become bigger than ever.
And they pretty much do whatever they want.
A while back, the New York Times published an article entitled "A Secretive Banking Elite Rules Trading in Derivatives".  That article exposed the steel-fisted control that the "too big to fail" banks exert over the trading of derivatives.  Just consider the following excerpt from the article....
On the third Wednesday of every month, the nine members of an elite Wall Street society gather in Midtown Manhattan.
The men share a common goal: to protect the interests of big banks in the vast market for derivatives, one of the most profitable — and controversial — fields in finance. They also share a common secret: The details of their meetings, even their identities, have been strictly confidential.
So what institutions are represented at these meetings?
Well, according to the New York Times, the following banks are involved: JPMorgan Chase, Goldman Sachs, Morgan Stanley, Bank of America and Citigroup.
Why do those same five names seem to keep popping up time after time?
Sadly, these five banks keep pouring money into the campaigns of politicians that supported the bailouts in 2008 and that they know will bail them out again when the next financial crisis strikes.
Those that defend the wild derivatives trading that is going on today claim that Wall Street has accounted for all of the risks and they assume that the issuing banks will always be able to cover all of the derivative contracts that they write.
But that is a faulty assumption.  Just look at AIG back in 2008.  When the housing market collapsed AIG was on the wrong end of a massive number of derivative contracts and it would have gone "bust" without gigantic bailouts from the federal government.  If the bailouts of AIG had not happened, Goldman Sachs and a whole lot of other people would have been left standing there with a whole bunch of worthless paper.
It is inevitable that the same thing is going to happen again.  Except next time it may be on a much grander scale.
When "the house" goes "bust", everybody loses.  The governments of the world could step in and try to bail everyone out, but the reality is that when the derivatives market comes totally crashing down there won't be any government on earth with enough money to put it back together again.
A horrible derivatives crisis is coming.
It is only a matter of time.
Stay alert for any mention of the word "derivatives" or the term "derivatives crisis" in the news.  When the derivatives crisis arrives, things will start falling apart very rapidly.
Posted by seemorerocks at 10:47