Europe Might Have Blown Last Chance to End Its Crisis: View 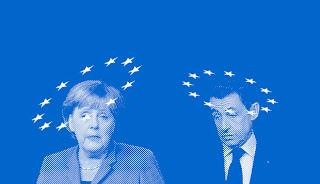 Bloomberg,
31 October, 2011
The euphoria over Europe’s latest rescue package faded quickly. Now the question is whether European leaders will ever agree on measures needed to end the sovereign debt crisis, and whether they will get another chance.
After an initial bounce, markets demonstrated a lack of confidence in Europe’s resolve to protect solvent governments from the financial malaise afflicting its weakest member nations. At a bond auction Oct. 28, the euro area’s third- largest economy, Italy, had to pay investors a yield of 4.93 percent -- a euro-era high -- to take the risk of lending it 3 billion euros ($1.8 trillion) for three years.
At least European leaders got the pieces right this time. They have recognized that a credible plan must include big writedowns of sovereign debt, a recapitalization of the banking system and guarantees for newly issued government bonds -- and that all these elements are inextricably linked.
But the magnitude is all wrong. Even if put in place, the plan would reduce Greece’s debt by less than 50 percent, raise about 100 billion euros in new capital and boost the guarantee capacity of the European Financial Stability Facility to about 1 trillion euros. As Bloomberg View has pointed out, sovereign writedowns should be much steeper. And Europe needs a war chest of at least 3 trillion euros to ensure recapitalizations and cover the financing needs of euro-area governments.
Intentional Shortfall
The plan’s shortfalls may be intentional. German Chancellor Angela Merkel and European Central Bank officials blocked the only credible option, which was backed by French President Nicolas Sarkozy: an open promise from the ECB that it stands ready to buy trillions of euros in government bonds. Before anything of the sort happens, the Germans and the ECB want mechanisms in place that ensure the central bank won’t end up financing more irresponsible government spending. As outgoing ECB President Jean-Claude Trichet put it in a speech last week, European authorities need the power “to take direct decisions” on economic policy in countries that fail to keep their finances in order.
Germany and the ECB are betting that incremental rescues, together with occasional bond purchases by the central bank, can keep the situation from spinning out of control, while maintaining the pressure needed to get big nations such as Italy to give up some fiscal sovereignty.
This is a dangerous game. The reforms they seek require treaty changes that could take years to carry out. Meanwhile, the doubts over Europe’s future will weigh on the region’s economy, pushing more and larger governments to the point where their debts become unbearable and aggravating concerns about the health of the banking system. At some point, investors will refuse to lend to sovereigns and banks at any price, and the strains will exceed the ECB’s ability to contain them.
Saving the euro now to fix it later is far from ideal. But it’s the best of bad options, something Europe’s leaders would do well to recognize before they reach the point of no return.
Posted by seemorerocks at 15:33