News from Occupy movement in USA 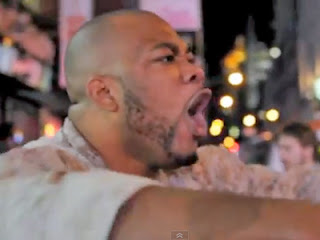 CBS News,
October, 24 2011
A new group called Occupy Marines is calling on non-active duty Marines to support the "Occupy" protest movement.
The group was formed online to support the Occupy Wall Street protests after videos circulated online of a Marine confronting New York City police, questioning their tactics used against Occupy Wall Street demonstrators.
In a video that has received nearly 2.5 million views, Marine Sgt. Shamar Thomas of Roosevelt, N.Y. an Iraq War veteran, spoke out to police in New York's Times Square, charging that they were over-reacting to Occupy marchers - and shaming their uniform.
"This is a not a war zone," Thomas said. "These are unarmed people. It doesn't make you tough to hurt these people. If you want to go fight, go to Iraq or Afghanistan.
"Leave these people alone," he yelled. "They're U.S. citizens! U.S.! Stop hurting these people, man. Why are you all doing to it to our people?
"They don't have guns! It doesn't make any sense!
"How do you sleep at night? There is no honor in this. There is no honor in what you're doing to these people! ...You're here to protect us!"

Thomas' outburst came after video of a New York City police official pepper-spraying protesters was circulated online.
Later in the video, Thomas answered questions from cameramen at the scene. He said he and both his parents have served in the military. "We fought for this country, I'm from New York City, and these cops are hurting people I fought to protect.
"There's no honor in hurting unarmed civilians, and I won't let that happen," he said.
The group Occupy Marines says, "We will support demonstrators with organization, direction, supply and logistics, and leadership."
Occupy Marines (Facebook)
#OccupyMarines (Twitter)
It asks supporters NOT to demonstrate in uniform, and has "Zero tolerance for any violence whatsoever, including verbal."
Police and security officials, they say, "should be seen as potential recruits to our cause and message, not as adversaries. Ultimately, they are accountable to the people."
They are also calling on protest groups to prepare for the coming months.
"American nay-sayers believe the 'Occupation' will not survive the winter - we will prove them wrong," writes the occupymarine.org website.
In other "Occupy" developments:
Portland, Me: Police are looking for the person who tossed a homemade chemical bomb over the weekend into the Occupy Maine encampment in Lincoln Park, outside the Cumberland County courthouse.
Portland Police Chief Michael Sauschuck said three to four people were up and about at the time, but none of them were hurt early Sunday. He said detectives don't necessarily believe Occupy Maine was the sole target because another device was set off elsewhere that night.
Sauschuck described the device Monday as the type often associated with teenage pranks. But he said police are taking it seriously because someone could've been hurt.
Chemical bomb thrown at Occupy Maine camp
Chicago: Nurses have joined the anti-Wall Street protests, with National Nurses United saying they've helped provide basic first aid to protesters in Chicago and other cities.
RoseAnn DeMoro, executive director of the nurses group, said nurses were among the 130 arrested in Chicago early Sunday when Occupy Chicago demonstrators refused to leave a park which closes at 11 p.m. DeMoro said a first aid station was torn down.
The nurses plan to picket outside Chicago Mayor Rahm Emanuel's downtown office Monday, in opposition to the decision to arrest the protesters.
Cincinnati: Former boy band singer Justin Jeffre is among the latest arrested in the Occupy Cincinnati protest.
The member of 98 Degrees has been charged with trespassing and unlawful use of the city's Fountain Square. Police say 11 people were arrested early Sunday at the square after the 3 a.m. closing time.
Jeffre told The Cincinnati Enquirer he spent several hours in jail and it was "no fun." But he says it was the right place to be to stand up for free speech. He was scheduled for a court appearance Monday.
Jeffre, now 38, is a founding member of 98 Degrees with Nick and Drew Lachey and Jeff Timmons. He has more recently been a Cincinnati political activist.
Little Rock, Ark.: Occupy Little Rock movement has set up a camp in front of the Clinton Presidential Library. CBS Affiliate KTHV reports about 25 tents were set up Friday in front of the library, where about two dozen people are protesting. Little Rock police have stood by so far.
San Jose, Calif.: A man participating in an Occupy San Jose protest has climbed a 36-foot-high wall near City Hall and is refusing to come down. Shaun O'Kelly scaled the wall around 3:20 a.m. Monday, after four other protesters were arrested for camping on city property.
O'Kelly put up a sign at the top that reads: "10 idling vehicles, 14 police officers, 4 peaceful protesters. Is your money being spent wisely San Jose?"
The San Jose Mercury News reports that the 27-year-old brought blankets, garbage bags and food with him, and vowed to stay as long as he can.
Boston: Police are investigating a rash of graffiti in the city's financial district that appears to be in support of the nearby Occupy Boston movement. Police say nearly two dozen locations, including banks, were hit over the weekend by spray-painted messages, including "End the Fed" and "Tax the Rich." Some of the graffiti includes a capital A in a circle, a symbol used by anarchists.
Some protesters say vandalism is counterproductive to their goals and they don't condone the graffiti.
Providence, R.I.: Activists with the Occupy Providence movement will march on City Hall on Monday to deliver the message that they intend to remain in the public park where they've been camped out for more than a week, setting up a potential clash with officials who say they cannot stay.
The protesters plan to hold an afternoon news conference at Burnside Park, where they set up an encampment on Oct. 15, and then deliver a statement to City Hall that reiterates their plans to stay.
In the statement, addressed to Providence Mayor Angel Taveras and Public Safety Commissioner Steven Pare, the group says it believes its occupation of the park is a "legitimate exercise of our constitutional rights to free speech." It also thanks the city for its cooperation with the protest so far. There have been no arrests reported.
Pare last week asked protesters to give a date for leaving the park, saying they do not have a permit and cannot stay indefinitely.
Pare is considering seeking a court order to evict the protesters. He says arrests are a last resort.
San Francisco: At Justin Herman Plaza, where Occupy San Francisco protesters have been camping out, vendor Willian Disken has been trying to sell belts at a booth just a few yards away. "We're just trying to make a living, so we're part of the 99 percent," Disken told CBS Station KPIX. But Disken notes the encroachment of the demonstration on the plaza: "It's getting bigger, and we're worried they're going to take over our spaces."
There also have been complaints that the protesters are not keeping the plaza clean.