Over 100 people were arrested on Friday as police violently evicted the peaceful protest camp in Melbourne. Defiant demonstrators have vowed to return. 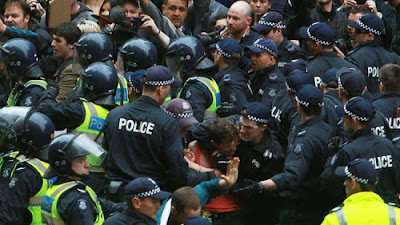 Roarmag.org
Indiamedia Australia reports:
After six days of peaceful occupation of the city square, and five days before the Queen is due to visit Melbourne, Lord Mayor Robert Doyle warned that if the protestors didn’t leave today they would be forcibly removed.
The eviction was carried out by 400 police including riot police and dogs. Horses and capsicum spray were also used to attack the crowd at various times. People stood their ground in the square before being removed one by one.
Occupy Melbourne then staged a peaceful sit-in in Swanston St which was again brutally attacked. At least 65 people were arrested, most released without charge however it is believed that 5 people remain in custody.


The crowd regathered at the State Library in the early evening and have vowed to gather once again – at 12PM in Federation Square, Saturday October 22nd.
The struggle against social and economic inequality, against corporate greed and for a real democracy continues tommorow on the streets of Melbourne and around the world.
Occupy Melbourne - violent cop hits peaceful protester in the face (Friday 21 October 2011)

and from Sydney, which is a little more peaceful

Why Occupy Sydney? (+ ABC voiceover)
Posted by seemorerocks at 17:39