This article does not make any mention of Japan's ongoing woes, related to Fukushima and the effects of electricity shortages 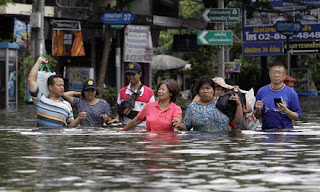 Gulf News,
31 October, 2011
Tokyo: Japan's automakers are "suffering very severely" from the floods in Thailand while confronted at the same time with the yen's appreciation, said Toshiyuki Shiga, chairman of the Japan Automobile Manufacturers Association.
The carmakers have shut their factories in Thailand since mid-October and the "situation will continue" in November, he said.
"Japanese automakers faced the March 11 earthquake and tsunami which resulted in supply chain disruptions and power shortages," Shiga, who is also chief operating officer of Nissan Motor Co, said.
"We stayed focused and recovered from the disaster quickly. Unfortunately, we're now facing several difficulties."
Thailand's worst floods in half a century have inundated about 10,000 factories and output losses are spreading beyond the country as supplies of components for cars and computers are disrupted.
Japanese automakers are losing production of about 6,000 cars a day because of the floods.
The strong yen, high corporate taxes and slow progress toward trade agreements have put Jap-an's position as an automotive manufacturing base at risk, Shiga said.

Wall Street Journal,
30 October, 2011
TOKYO—The Japanese government is expected to approve financial assistance to Tokyo Electric Power Co. this week, after the embattled utility sought about ¥1 trillion, or about $13 billion, in public funds Friday to deal with compensation claims from the disaster at the Fukushima Daiichi nuclear plant.
The government's objective is to keep the company afloat. Without public funds, Tepco would have to report a capital deficit for the July-September quarter, results of which are due by Nov. 14. Even the slightest hint of bankruptcy of a company with ¥13 trillion in liabilities could trigger major financial turmoil.
Public assistance is expected to sustain Tepco in a state of positive net worth of about ¥700 billion at the end of the current business year in March, even after booking an expected annual net loss of about ¥570 billion.
But if the bleeding continues at the current pace, much of the capital would be lost in the next business year. This makes it crucial for Tepco to secure either an electricity-rate increase or an early restart of idled nuclear reactors to deal with the cost increases resulting from the prolonged stoppage of nuclear power plants and greater reliance on expensive thermal power, a government official familiar with the matter said.
For article GO HERE 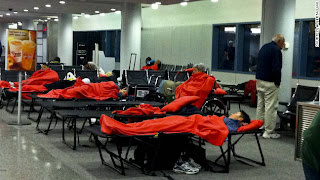 CNN,
30 October, 2011
Airline passengers left stranded by a freak snowstorm that pounded the Northeast and Mid-Atlantic states were waiting to get to their destinations Sunday, many after spending a restless night on cots or airport floors.
"Whatever kind of system they had, it completely and utterly broke down," said passenger Fatimah Dahandari, who spent a night in Hartford, Connecticut's Bradley International Airport while trying to get to New York. "It looks like a refugee camp in here."
More than 4 million people in at least five states were without power Sunday as the storm moved offshore. Up to five deaths, some in traffic accidents, were blamed on the storm.
Occupy Wall Street
But the storm did little to deter Occupy Wall Street protesters, who camped out in tents coated with a layer of snow in New York's Zuccotti Park.
A day earlier, dozens of firefighters removed the group's propane tanks and six generators, New York Mayor Michael Bloomberg said, citing fire hazards. That left the demonstrators to battle the cold weather seeping through their tents, blankets and sleeping bags.
For article GO HERE
Posted by seemorerocks at 12:11