I quite like these comments that someone posted in response to Friday's events.


"Conditions in Australia are ripe for a clerical-fascist Ustaše-like client regime allied to the (American) Reich. The Federal Parliament is somewhat paralysed with a weakened leftish coalition government.


Would-be PM Tony Abbott has literally said not to believe anything he says unless it is written down - reminiscent of a historical figure who wrote down exactly what he thought in a screed but after he set about lying to everyone that his intentions were good no-one really took it seriously until it was too late". 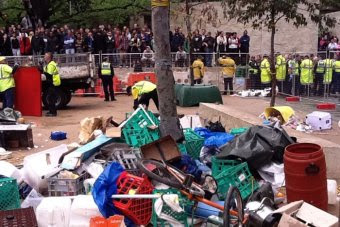 ABC
Updated October 23, 2011 02:05:15
Occupy Melbourne protesters have voted to halt any further protests until next week.
Several hundred demonstrators marched peacefully from Federation Square to Trades Hall in the city's north on Saturday, followed by a large police contingent.
It comes after violence erupted in the CBD on Friday, when police tried to remove the activists who had been camping in the city square.
Police used capsicum spray, horses and dogs to push the hundreds of activists out of the city centre, with officers dragging some protesters away.
About 100 were arrested in full public view as the scenes spilled out onto Swanston Street, and two police officers were also injured.
Despite today's decision to halt, demonstrators have vowed to continue protesting against corporate greed.
"We want a better society, we want to have a say, we want to have true democracy," one said.
"You've got to put your body where your mouth is, you've got to walk the walk, if you believe in it you've got to be here, but it's never going to turn to violence, it's not going to be violent today," another demonstrator said.
Another protester expressed solidarity with the global movement, which was sparked by protests in New York.
"You ain't going to make us go away, we are going to keep coming back, we've got support from all around the world," he said
In Sydney, hundreds of people gathered in the CBD for the latest rally by Occupy Sydney protesters.
Dozens of police watched on as speakers from environmental groups and unions made speeches.
The protesters also voted to support Qantas engineers in their industrial dispute with the airline.
Peter Somerville from the Australian Licensed Aircraft Engineers Association thanked them for their support.
"It's difficult to see an end to this dispute anytime soon, but the fact is that the workers are determined. We're determined to achieve a fairer outcome and part of that is getting access to people like you, to the media and others to put our case across," he said.
Despite the today's peaceful event, tensions remain between Melbourne protesters and police, with Occupy Melbourne's legal advisers earlier threatening legal action against police and the Melbourne City Council, which ordered Friday's eviction.
"Our observers have witnessed and been told of numerous incidents of excessive force and violence against the peaceful protesters," said Erin Buckley, coordinator of the legal observer team.
"We are very concerned at the level of violence, and concerned particularly about the welfare of young people who have experienced significant police brutality."
Posted by seemorerocks at 09:38