Australia: yet more assaults on the Occupy movement

Reports from the corporate media 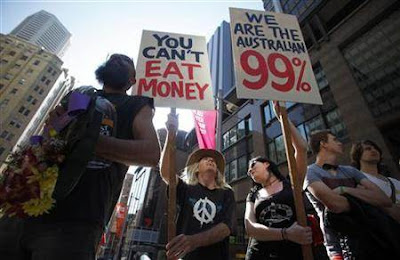 Police break up "Occupy Sydney" protest in raid
MSNBC,
22 October, 2011
Police broke up a Sydney protest camp inspired by the Occupy Wall Street movement in an early morning raid on Sunday, making dozens of arrests, police and protesters said.
The 'Occupy Sydney' protest against corporate greed and economic inequality in the Martin Place business district had been going on for a week, with a small group sleeping out in the square despite seizure of camping equipment, setting up solar panels to charge mobile phones.
The raid by about 100 officers came two days after police in Melbourne broke up a parallel protest there in violent scenes. New South Wales state police said they had made 40 arrests in Sydney on Sunday. Some protesters were expected to be charged with crimes, including assaulting police.
Video shot by protesters and posted on their website (www.occupysydney.org.au) showed a rubbish-strewn patch of ground, with police moving through in the dark.
Protest spokesman who gave his name as Tim Davis Frank said about 70 people were in the area when the raid started around 5 a.m. (2:00 p.m. EDT Saturday), including some homeless people who had joined the demonstrators.
"I was fast asleep. People started yelling - get your camera out. One of the police was yelling something into a microphone," Davis Frank told Reuters. "They basically informed us we had 10 minutes to gather our possessions."
Police said protesters had originally had permission to protest for two hours, which they had exceeded more than a week ago, and had repeatedly ignored requests to leave.
"Protesters were given a final warning to leave Martin Place this morning before police moved in and cleared the area," police said in a statement.
Although inspired by the 'Occupy Wall Street' movement, the protests generally only attracted crowds of up to a few hundred, largely drawn from left-wing groups.
Australia's economy weathered the global economic crisis better than most developed nations, buoyed by its key resources exports, and currently has a low unemployment rate
Occupy Sydney protesters vow to continue
Sydney Morning Herald
October 23, 2011 - 5:09PM
Defiant Occupy Sydney activists say their movement will only get stronger after a dawn police raid ended their week-long protest in Sydney's CBD.
Police were accused of using excessive force in the 5am (AEDT) raid on Sunday in which police, including officers from the riot squad, cleared Martin Place of more than 100 protesters.
Forty people were arrested, with activists claiming they were manhandled off the site with little warning from police.
The group had been at Martin Place for over eight days as part of a global campaign against corporate greed.
"At 5am ... Sydney police joined Melbourne police in stamping out protests that are peacefully occurring in 1600 cities around the world," Occupy Sydney spokesman Tim Davis Frank told reporters in Sydney.
"This movement will only get stronger because of these illegitimate actions attempting to silence us."
Another Occupy Sydney spokesman, Mark Goudkamp, said he saw police throwing punches and protesters held on the ground with bloody noses, while his own wrist was held painfully behind his back.
"Police were clearly on a mission to get us out of there and they used whatever force they decided was necessary," Mr Goudkamp said.
"(But) the movement is still very much alive, and will continue, even if it is in another form."
In Melbourne on Friday, police forcefully evicted scores of anti-capitalism protesters from City Square, making almost 100 arrests and dragging away many of the demonstrators before erecting a cyclone fence around the site.
NSW Police Assistant Commissioner Mark Murdoch rubbished claims that officers were violent in their Sydney raid on Sunday, saying they had acted with the "utmost professionalism"
.
Mr Murdoch said protesters were given plenty of warning but refused to leave and linked their arms.
They then used "varying levels of resistance" against police attempts to remove them, and police responded with "commensurate use of force", he told reporters in Sydney.
"Some people had their arms bent behind their backs. I make no apologies for that, absolutely none," he said.
"It was to ensure compliance and their own personal safety and the safety of my police."
The raid came after two protesters were charged with assaulting police and resisting arrest on Saturday night.
A police officer was treated for lacerations to his head after he was allegedly struck with a metal torch in what Mr Murdoch described as a "completely unprovoked attack".
He said police had gone out of their way to negotiate with the group, giving them the option on Wednesday of confining their protest to daytime only.
Occupy Sydney activists said they turned down the option of a daytime protest because the global occupation movement was about remaining in one place permanently.
NSW Premier Barry O'Farrell supported the protesters' removal, saying police took appropriate action.
"I think police have acted lawfully, they have acted in the interests of the public and have acted responsibly," Mr O'Farrell told reporters in Sydney.
Of the 40 people arrested, four were charged with assaulting police, 29 were issued with infringement notices for breaching a local government act and seven were issued court attendance notices for the same offence.
The Occupy Sydney group is scheduled to meet at the University of Technology Sydney (UTS) at 5pm (AEDT) on Sunday to discuss the next step, but spokesmen say there are no initial plans to return to Martin Place.