A very confusing media picture on this.
Firstly yesterday I referenced an article from Stuff entitled “Industry take big hit”
By the afternoon the same article had metamorphosed into “Gas back on for small busineses”.
This morning it appears that there are shortages of food because of the leak - despite that the headlines in the NZ Herald were about the All Black victory.
There was an item on the 7.00 am news on Radio New Zealand saying that the gas producers were saying that it was not economic to build a new pipeline because gas reserves at Maui are not high enough to warrant the cost of construction.
By 7.30 this item had disappeared from the news.
This is what the local Taranaki media is saying this morning.
How long until the next emergency?
....
All this is about an emergency situation - but there is predictably nothing about the bigger picture. What I see is basically what happens when oil (in this case gas) reaches Peak; 30-year-old infrastructure is starting to break down and no one is going to make the investment to build another gas pipeline because it is simply not economically viable.
Run on food as leak hits Taranaki supplies 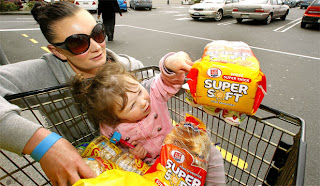 Stuff,
28 October, 2011
Bread was flying off the shelves last night as the effects of the Maui gas leak reached Taranaki supermarkets.
Late last night some supermarkets had only about 20 per cent of their bread stock left.
"People were loading up their trolleys with it, some had four or five loaves. They were probably just thinking they better buy some and stick it in the freezer," shopper Murray Hills said.
"It was just about empty."
Shoppers at City New World were faced with signs warning of bread shortages as bakeries shut down production because of the Maui problem. "We are sorry for any inconvenience this may cause and as soon as we can we will restore stock levels for you," the sign read.
Supermarkets across country face bread, dairy shortages
This is coverage from Radio New Zealand this morning
Supermarkets across the country face food shortages 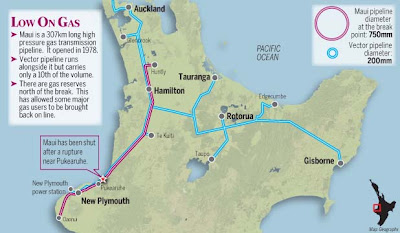 
Back up was the Vector pipeline, and it was not economic to build a larger back up pipeline which would be an ''extremely expensive exercise''.
Acting Energy and Resources Minister Hekia Parata said the Government would give Vector any assistance it needed.
AUCKLAND IMPACT
Auckland Council has been shutting down gas supplies to its buildings and services, including swimming pools, crematoria and heating in some council offices and buildings.
The council has also activated its emergency co-ordination centre and Mayor Len Brown is urging Aucklanders to do what they can to cut gas use.
"This is a major challenge for Auckland. I am urging all Auckland businesses and retailers to seek advice from their gas provider as to how to safely shut off supplies as quickly as possible," Brown said.
Gas has been turned off at AUT University's City and North Shore campuses, including science laboratories, teaching kitchens, gymnasiums and commercial food outlets.
"Gas to our student accommodation is still on, in line with advice to Auckland residential customers," said AUT Deputy Vice-Chancellor Professor Rob Allen.
Auckland Grammar School's head of operations, Patrick Gargiulo, said the heating for the pool had been switched off following a request from supplier Nova Energy.
Auckland Art Gallery was looking at ways to limit the air conditioning while ensuring the art was not affected in the temperature-controlled rooms.
BAD TIMING FOR FARMERS
Fonterra's Northland processing sites Kauri and Maungatoroto, as well as the Tip Top plant, will stay closed.
Fonterra's consumer products manufacturing plant at Takinini, south of Auckland, has been running on diesel, and supplies to supermarkets and stores should not be impacted, the company said. However, icecream supplies could be hit with Tip Top closed.
Vector is supplying the big dairy plants in the Waikato and Bay of Plenty with an emergency restricted supply to avoid a potential environmental disaster as Fonterra farmers in the affected regions are forced to dump 35 million litres a day on their paddocks.
The dumped milk is worth about $20 million a day to affected farmers. Although their farmer cooperative will reimburse them for lost milk, the money will have to come from farmers' own pockets in the long run.
The Tatua dairy cooperative in the Waikato has been shut down since yesterday by the gas outage. Unlike its Fonterra neighbours, it has had no word of resumed gas supply from Taranaki.  Its 109 farmers are having to dump milk on their farms, the company said.
Open Country Dairy's plant at Whareroa in the Waikato is unaffected. The privately owned company is trying to help Fonterra and Tatua farmers by offering to process whatever milk it can, but has limited capacity in the current seasonal height of milk production..
Fonterra's Waitoa and Te Awamutu sites are operational because they are coal-fired.
The gas leak had come at the worst possible time, Federated Farmers president Bruce Wills said.
"It's very unfortunate this has happened right at the peak of the season...if it was going to happen, it's probably happened at the worst time."
Fonterra processors worked for half the day yesterday, and a speedy resolution and good weather meant the environmental impacts had been very small, the company said.
Some major greenhouse growers around Auckland will be seriously affected without gas heating for the next few days, said Leigh Catley, communications manager for Horticulture New Zealand.
She said it could easily impact on the supply of tomatoes and capsicums in the run-up to Christmas.
That's likely to force up the price of those vegetables to consumers and also stop exports that need to be heat-treated for biosecurity.
Posted by seemorerocks at 09:16