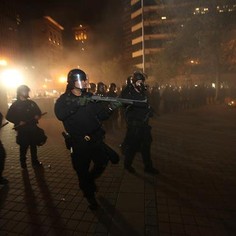 Why this is Important
We, the undersigned, stand in solidarity with Occupy Oakland.
We are outraged by your decision to have that peaceful, lawful and inspiring assembly raided.  We denounce police intimidation, harassment and incarceration of peaceful protesters.  We call on you to drop all the charges against these community leaders, to release them immediately, and to allow for the restoration of the encampment.
Occupy Oakland has been a public forum, on public land, about matters of dire urgency to the public:  unemployment, affordable housing, taxation, bank accountability, and the unconscionable and deeply racialized inequity between the 1% and the rest of us.


These very same concerns are the heart of the work of dozens of community organizations, labor unions, and activists throughout the SF Bay Area.  Our government must represent these progressive commitments, and not pander to the 1%.
A city government of the 99% should work proactively to support the encampment with resources like medical assistance, electricity, and bathrooms.
A city government of the 99% should open its doors to the encampment, come down to hear the concerns of the protesters, and defend the constitutional right to peaceful assembly.
A city government of the 99% should take inspiration from the encampment, and use its power to meet some of its demands:  taxing the rich, holding big banks accountable, job creation, affordable housing, healthcare, and so many rights our communities have been denied for too long.
What Oakland needs and wants is a city government of the 99%.
This type of violence cannot happen again in Oakland or any other city around the country. We demand that mayors and police chiefs around the country refrain from similar Oakland-style police attacks, we the concerned citizens of the country are watching.
To sign petition please GO HERE
Posted by seemorerocks at 21:01