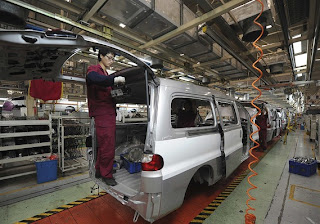 HONG KONG (MarketWatch) — Even as data Monday showed better-than-expected growth for China’s manufacturing sector, many analysts are concerned about a a potential hard landing for the Chinese economy.
“Investors should prepare for both a hard landing and a yuan devaluation,” said Societe Generale strategist Albert Edwards, who sees the beginning of an era of slow growth in China.
He points to the sharp drop in China’s foreign-exchange reserve accumulation in the recent quarter as a worrisome sign that liquidity is tightening.
Reserves growth tends to be inflationary, Edwards said, likening it to China’s version of quantitative easing.
China purchases U.S. dollars and other foreign currencies from its commercial banks, exchanging them for yuan printed by the People’s Bank of China in whatever quantity needed and injecting liquidity in a way similar to quantitative easing conducted by the U.S. Federal Reserve and Bank of Japan, among others.
Edwards cited a previous soft patch in China’s forex reserves accumulation, which coincided with dollar strength, and said the drop helped foreshadow a large fall-off in commodity prices and emerging-market equities during the second half of 2008.
Investors, he said, should pay careful attention to recent figures from the People’s Bank of China.
Reserves grew by $4.2 billion in the third quarter, compared to a monthly average of $58 billion throughout the first half, according to PBOC figures released earlier this month.
The slowdown reflects Beijing’s attempts to achieve a “soft landing” for its credit-fuelled property and investment bubble. But Edwards said that while such a move may help to cushion against a meltdown in the immediate future, the effective tightening is bound to shake the economy and markets at some point down the road.
“History is not on their side,” he said, calling China a “freak” economy in terms of its long run of high investment levels compared to the size of its gross domestic product.
“If you came down from Mars and saw an economy with an investment-to-GDP ratio of 50%, you would conclude it would be among the most volatile in the world, not the most stable,” he said.
Credit where credit is due
Others analysts pointed to a sharp drop in new lending as the big concern.
A broader definition of lending activity tracked by the PBOC, known as “total social financing” — which tracks informal sources of credit such as trust loans and bankers acceptances in addition to regular bank lending — slowed by nearly one-third in the past quarter.
In fact, lending via trust loans and margin deposits virtually disappeared during the quarter, though some believe the decline was related to new rules which took effect in September.
“Officials have reasserted control over total credit growth, at least for a while, but at the cost of pushing more borrowers into the arms of unregulated underground lenders,” wrote analysts at U.K.-based Capital Economics.
Capital Economics also warned that Chinese consumers might not be in a position to support the retail boom expected by some economists with upbeat views on China
.
Retail sales did expand in the third quarter, though at the slowest pace in seven years, according to recent data.
And softness in the labor market could dampen future results for retail sales. While preliminary results released Monday from HSBC’s monthly manufacturing survey showed gains for the sector, a subcomponent measuring employment showed little improvement.
The HSBC data generally focuses more on small and mid-sized businesses, compared to a government-sponsored survey due out early next month, and Citigroup said in a recent note that these smaller firms are suffering from a lack of available credit.
In the note entitled “Lending at a Crossroads,” the Citigroup analysts said their recent tour of three mainland Chinese cities churned up evidence of a broadening credit crunch for such companies.
Meanwhile, many Chinese firms surveyed were seeing their profit margins come under pressure, in part from punishing credit costs, but also from a stronger yuan and rises in wages and other input costs.
Smaller companies that “overexpanded the under the stimulus [unleashed after the 2008 financial crisis] find it difficult to steer their business towards domestic demand,” said the Citi analysts, who toured China’s eastern manufacturing zones of Suzhou, Changxing, and Wenzhou.
Posted by seemorerocks at 17:58