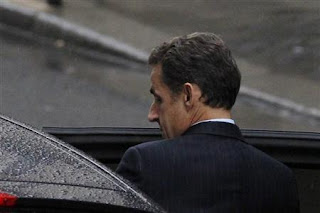 (Reuters) - Plans to tackle the euro zone debt crisis have stalled with Paris and Berlin at odds over how to increase the firepower of the region's bailout fund, French President Nicolas Sarkozy said on Wednesday
Sarkozy told French lawmakers the dispute was holding up negotiations and flew to Frankfurt to talk with German Chancellor Angela Merkel in an attempt to break the deadlock ahead of a make-or-break European leaders' summit on Sunday.
The two leaders left that meeting without speaking to waiting reporters.
For article GO HERE

Zero Hedge.
19 October, 2011
If that headline is confusing to readers, it simply means, in a polite way, that Germany had a failed Bund auction. The country sold €4.075 billion in 10 Year Bunds after it had attempted to sell €5 billion and got just €4.55 billion in bids. The result made it "technically uncovered" and reflects the fear in the market that Germany will be forced to shoulder the burden of the EFSF expansion. And even with this poor result, the OAT-Bund spread still managed to blow out to another all time record of 115 bps overnight. The contagion at the core is there.
Reuters has more on the internals:
Germany sold 4.075 billion euros in its final reopening of the September 2021 bond, bringing the outstanding amount to 16 billion euros. A new January 2022 benchmark will be launched in November. The bid/cover ratio at the sale was 1.1, below the 1.5 at the previous sale in September and the 2011 average at 10-year Bund sales of 1.61, according to Reuters data. But with a target amount of 5 billion euros -- the Bundesbank retained 0.925 billion euros -- the 4.55 billion euros of bids drawn did not match the amount on offer.
The last 10-year auction deemed a technical failure was in July. "Looking at the bid/cover and the fact that ... we're facing an undersubscribed auction it shows that when risk appetite is on the rise it's difficult for the Finanzagentur to find enough demand out there," said WestLB's Leister.
And overall commentary:
Germany saw poor demand for its 10-year bonds at an auction on Wednesday as a modest pick up in equities hit appetite for safe-haven debt and low yields failed to lure investors. It was the second weak result in a row for Germany, with a 30-year bond sale last week also technically uncovered despite chunky cash inflows from coupon and redemption payments. Shares and the euro were higher, and German Bund futures lower, before the sale on optimism policymakers will take major steps at a weekend summit to resolve the euro zone debt crisis. "It's a continuous story that we've had over the past couple of weeks that if risk appetite is somewhat better we have very weak demand for German auctions," said WestLB rate strategist Michael Leister.
Bund futures extended losses after the auction, hitting a session low of 134.32, down more than a full point on the day, while 10-year yields in the secondary market were 10 basis points higher at 2.12 percent. "Poor demand for expensive paper," said Annalisa Piazza, a strategist at broker Newedge. "Market dealers seem to have been more driven by valuations this time around." But analysts said there was no threat to Germany's ability to fund itself. "I don't think it's a big worry for German credit perception," said ING rate strategist Alessandro Giansanti. "It's more a technical issue given the low level of yields and no strong appetite to buy at those levels, especially when you have some corporate bond issuance coming at a generous discount with attractive yields."
Financial markets have been volatile in recent sessions, as expectations of a swift decisive resolution to the euro zone debt crisis rise and fall. After German Finance Minister Wolfgang Schaeuble warned on Monday that there would be no definitive solution at a European Union leaders' summit this weekend, equities and other riskier assets rallied on Wednesday on reports -- later denied -- that an agreement had been reached to increase the firepower of the euro zone's rescue fund .
With 5 weeks to go, no consensus on deficit super committee
Comments from Mike Ruppert:


“The Committee of 12 is positioning to be both a colossal failure and a brutal bludgeon when it gets backed into a wall and has no options but to either fail completely, destroying any faith in government, or act as a paid agent of the monetary paradigm, crushing all in its path. It is built to fail because it shoehorns everything into a Republican/Democrat mindset, with neither side addressing infinite growth or the banks' near-complete control of the political process. The only thing the committee is capable of is increasing our suffering, our frustration, and our anger. Until you change the way money works, you change nothing.” -- MCR

MSNBC,
18 October, 2011
With just five weeks until its deadline, a secretive Congressional committee seeking ways to cut the federal deficit is far from a consensus, and party leaders may need to step in if they want to ensure agreement, say people involved in the panel’s work.
The 12-member committee is just over halfway through the 76-day interval from its first meeting to the date its final report is due on Nov. 23, but has not gained much traction. The lawmakers have not agreed on basic elements like a benchmark against which savings will be measured.
The panel’s members, evenly divided between the two parties, spent most of September in a standoff. Republicans refused to budge from their position against new taxes. Democrats said they would not discuss cuts to entitlement programs like Medicare unless Republicans made a firm commitment to accept additional revenues.
For article GO HERE
Asia Stocks Fall on Europe Divisions

Bloomberg,
20 October, 2011
Asian stocks fell, wiping out this week’s gains, and the won weakened from a one-month high, as a split emerged among European leaders on a rescue plan and the Federal Reserve said companies grew more pessimistic about the U.S. economy. Industrial metals sank for a fourth day.
The MSCI Asia Pacific Index dropped 1.4 percent as of 12:01 p.m. in Tokyo. Standard & Poor’s 500 Index futures retreated 0.1 percent, erasing an earlier gain of 0.3 percent. The won slipped 0.6 percent against the dollar and the euro depreciated 0.2 percent to $1.3732. The cost of insuring Asia-Pacific debt from default increased. Copper and zinc fell more than 3 percent in London, while oil declined a second day in New York.
For article GO HERE


"Worst dust storm in decades" rolls through Texas plains
Visit msnbc.com for breaking news, world news, and news about the economy
Posted by seemorerocks at 17:31