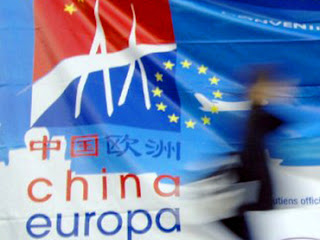 RT,
26 October, 2011
China, as the country with the world’s biggest financial reserves, has thrown its weight behind the EU’s efforts to contain its financial crisis, offering European countries its broad financial shoulder to lean on.
However, bargaining over the price of its support is already underway.
Beijing's biggest trading partner – the EU – would like to boost the value of the yuan. But the financial crisis in Europe means China is calling the shots, and has repeatedly told the EU to get its house in order.
Beijing’s top brass have made it crystal clear that China will not sit on the sidelines and watch Europe fall, says Professor Liu Baocheng, from the University of International Business and Economics in Beijing.
China is waiting for the results of the latest EU summit which is expected to adopt further measures to curb the economic crisis in the form of additional austerity measures or new budget cuts.
In lending money to European capitals, “China wants to be sure that this money will be effective, will have purpose and will be returned,” affirms Professor Baocheng.
China is also considering helping the EU through other means than direct financial injections, explains the professor.  It will offer aid “through collaboration, through more of a direct investment from Chinese businesses instead of simply loaning money to [European] government bond – that could be a better solution in the meantime,” he argues.
China is not satisfied with the austerity measures currently in place in EU countries, believing the pace of change is too slow, Baocheng believes.  He says Europe lacks decisiveness and has even sabotaged its own rescue plans, so though China is ready to become the EU’s savior, “China will not be a ‘white knight’ in this regard.
“The understanding is that it is those individual countries who are having the problems which will be solving their own sovereign problems in the first instance,” explains Liu Baocheng, and China expects that the “euro zone can come up with the specific solution in which China can join to help.”

While Europe and China move towards closer financial co-operation, Washington is beating the drums of economic war against the sky-rocketing Chinese economy.
U.S. lawmakers are calling for the White House to punish China for what they call 'predatory' trade tactics. They claim Beijing has devalued its currency to boost its own exports, while making American exports to China more expensive.


Earlier this month, the US Senate passed a bill that would allow it to impose tariffs on Chinese products.
“By some estimates, since 1990 the increase of China’s manufacturing sector has cost the US three million jobs,” acknowledged Beijing-based journalist Shannon Van Sant.
Some American lawmakers are urging a currency war against China, while others are far more moderate, reasoning with their hawkish colleagues that the current state of the American economy might not withstand a trade war with a major economic partner and creditor.
American lawmakers are sorely tempted to appeal to their voters who are feeling the heat of the economic downturn by fixing  the blame for it on China.  At the same time, the idea of a trade war with the Asian giant terrifies them. In theory, a US-China trade war is possible, shares Shannon Van Sant, but this would endanger the world’s efforts to solve the global economic crisis.
“No matter what the US starts – China is going to focus on its own economy to keep it growing,” affirms the  journalist

Posted by seemorerocks at 14:15