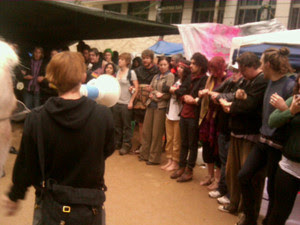 Sydney Morning Herald,
October 22, 2011 - 2:34AM
Anti-capitalism protesters will reconvene in Melbourne's CBD on Saturday in defiance of police, following violent clashes after they were evicted from their City Square camp.
Almost 100 people were arrested on Friday when scuffles between Occupy Melbourne protesters and 400 police officers spilled into city streets after officers forcibly removed them from the City Square, dragging many writhing and kicking, and carrying others.
Most have been released without charge.
More than 20 protesters had minor injuries and one was taken to hospital.
Two officers were also injured with one taken to hospital to have his eye flushed.
Eight police cars were damaged, police said.
Protesters believe footage of the clashes will encourage more Australians to join their movement when they reconvene at Melbourne's Federation Square at midday on Saturday.
They say they have recorded numerous incidents of police violence and brutality and have assembled a legal team in anticipation of legal action.
"Everyone in Australia will be upset about the obvious police brutality that occurred," said spokesman Carl Scrase.
"I don't know how many Australians will be activated by this.
"The things that occurred today will have big ramifications for years to come, in and outside of courts ... we expect court action."
Police say they are prepared to deal with any protests that continue into the weekend.
The chaos was sparked after about 100 Occupy Melbourne demonstrators, who had camped out in the City Square for a week as part of global protests against corporate greed, defied an order to leave by 9am (AEDT) on Friday.
By about 12.30pm (AEDT), a huge police contingent, including the riot squad, began dragging protesters out of the square and cleared the area within 10 minutes.
The protesters have called on Premier Ted Baillieu and Lord Mayor Robert Doyle to back an independent investigation into the use of excessive force by police and Melbourne City Council on Friday.
They said dozens of police officers were not wearing name badges, in breach of regulations.
"More than 20 statements have been taken from individuals who have experienced police violence, including eye gouging, kicks to the groin, punches to the face, knees to the face and arbitrary pepper spraying, including of minors," said Occupy Melbourne spokesperson Erin Buckley.
"One incident involved an elderly woman with a walking stick who was pushed to the ground by riot police."
Protesters are calling on the city council to compensate them for the 17 truckloads of personal property - computers, cameras, bicycles, tents and cooking equipment - that they say was removed and destroyed.
For a live blog GO HERE

Some photos from the Herald Sun 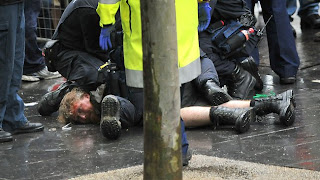 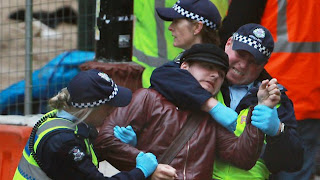 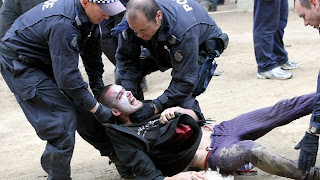