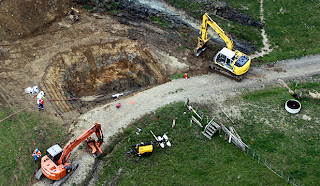 TVNZ
43AM Wednesday October 26, 2011
Thousands of commercial gas users from New Plymouth to Northland have been told to stop using gas supplies while repairs are ongoing to fix the Maui pipeline leak.
Energy company Vector, which operates the pipeline, says it has 255,000 customers using gas with 5000 of those being commercial.
Gas supplies are being returned to essential services, including dairy processing factories, which had been forced to suspend operations after the break in the Maui gas pipeline.
But North Island manufacturing industries are being shut down and consumers are starting to be affected.
At a briefing this morning it said half of those 5000 are affected including major users like steel mills, thermal power generators and the NZ Refining Company which operates Marsden Point.
Operations are disrupted at major Auckland manufacturers including CocaCola, Nestle, Hubbard and Bluebird Foods.
The Service and Food Workers Union Nga Ringa Tota says it has been "deluged" with calls from workers whose jobs could be affected.
"Thousands of our members are employed in large food processing factories like Griffins and Bluebird in the upper North Island," said SFWU food industry leader Chas Muir.
Muir said the SFWU was advising members that they should not be disadvantaged by the leak and should not lose any pay.
"We are advising members that any good employer will have insurance cover and the onus is on the employer to do the right thing," he said.
"If they are ready and willing to work it is the employer's responsibility to pay them."
The Chelsea Sugar Refinery has shut down with general manager Bernard Duignan saying it is now just a waiting game.
Duignan says staff are still on the Auckland site, but they're doing other things and there is plenty of raw sugar in stock.
For article GO HERE
Posted by seemorerocks at 17:23