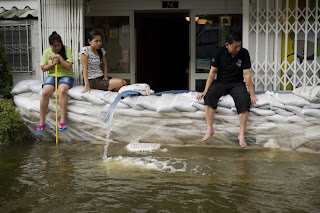 
Residents of Bangkok are escaping the flooded Thai capital in their tens of thousands due to worsening weather forecasts and the government's evacuation orders.
Flood waters were already seeping into central parts of Bangkok on Thursday morning, with waters entering the Grand Palace, near the swollen Chao Phraya river, the AFP news agency reported.
Al Jazeera's Wayne Hay, reporting from Bangkok, said the number of districts that have been ordered to evacuate is increasing by the hour.
"The water level is only expected to rise when the floodwaters combine with high tides that are on the way," he said.
Sukhumbhand Paribatra, the Bangkok governor, said on Thursday that he expected to soon announce an evacuation warning for Sai Mai district, located on the city's northern outskirts, where waist-high water has turned roads into virtual rivers and swamped petrol stations and homes.
A day earlier, Sukhumbhand said residents of two of the city's 50 districts - Don Muang and Bang Phlat, both already partially submerged - should leave for shelters.
"This is the first time I am using the term 'evacuation', the first time I'm really asking you to leave,'' he said.
'Consider evacuating'
Floodwaters bearing down on Bangkok - a city of nine million people - have killed 373 people nationwide since July, caused billions of dollars in damage and closed its second largest airport.
Government offices were shut across the city on Thursday after the government ordered a five-day holiday - from Thursday to Monday - in flood-affected areas, including Bangkok, to allow residents to prepare for the inundation or leave.
A huge run-off from the north equivalent to 480,000 Olympic swimming pools is expected to reach the city at the same time as seasonal high tides this weekend, the UN's Office for the Co-ordination of Humanitarian Affairs said.
Districts north of the centre have already been inundated, shutting down the city's second biggest airport.
The country's Flood Relief Operations Centre (FROC) said late on Wednesday that it was working on providing extra shelters outside the city of 12 million people, where food and deliveries were expected to become more difficult.
"I would like to ask Bangkok people who are already affected or could be affected soon to consider evacuating to other places," Thongthong Chantarangsu, a FROC spokesman, said.


Satellite maps of Bangkok showed a city almost entirely surrounded by water. Most of the vast pools of run-off now submerging one-third of the country are flowing from the north towards Bangkok, on a course headed southward towards the Gulf of Thailand.
"The amount of water is gigantic,'' Yingluck Shinawatra, the Thai prime minister, said. "Some water must spread into Bangkok areas but we will try to make it pass through as quickly as possible.''
Thousands of people packed Bangkok's Mo Chit bus terminal late on Wednesday, trying to leave town on their own to take advantage of the five-day public holiday.
Some waited for hours on the sidewalk outside Mo Chit because there was no space inside the terminal, the main departure point for buses to Thailand's north. Large crowds were also reported at the city's main international gateway,
Suvarnabhumi airport, which remained open.
Mass disruption
In the district of Sai Mai, on Bangkok's northern outskirts, hundreds of residents clambered aboard packed military vehicles with their belongings, desperate to leave.
Yingluck said this week that central Bangkok could be swamped by up to 1.5 metres of water in some places if barriers broke and told residents to get their belongings up to high ground.


"After assessing the situation, we expect floodwater to remain in Bangkok for around two weeks to one month before going into the sea," she said on Wednesday.
Authorities would guard important places such as the royal palace and power stations, she said.
The floods in the north, northeast and centre of Thailand have disrupted the lives of nearly 2.5 million, with more than 113,000 in shelters and 720,000 people seeking medical attention.


Flooding has already forced the closure of seven industrial estates, causing billions of dollars of damage, disrupting international supply chains for industry and putting about 650,000
people temporarily out of work

Aftermath of Italian floods reveals huge damage
Rescue workers are trying reach areas ravaged by floods to begin the clean-up.
the Telegraph,
27 October, 2011
The Liguria and Tuscany regions in the north and centre of Italy have been worst hit by the floods, with houses torn apart and cars thrown on top of each other after swollen rivers spewed torrents of muddy water through villages.
One village resident said he had initially got onto his roof when the rains came down but had eventually had to brave the water and walk to safety.
"We had a flood that we never, ever saw before. The rain fell and then it was two metres high on the ground, terribly fast, we were on the roof and we had to go down and run elsewhere," said Armando Fabiani from the village of Brugnato in La Spezia.
Rescue services have found it difficult to enter the worst hit areas, with roads and bridges washed away and many major thoroughfares blocked. But the search for the missing has already begun and diggers are clearing debris.
Officials have said nine people died as a result of the floods. Several people are still missing.

Posted by seemorerocks at 10:05