Growth will be up and unemployment will be down; we'll be back in surplus - and of course pigs will fly! 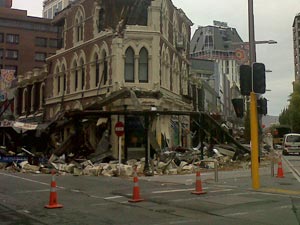 
The estimated cost of the Christchurch quake has ballooned from $15 billion to $20 billion but it could go as high as $30 billion.
Treasury says the quake cost hike is because of continuing aftershocks and rebuilding is taking longer than expected.
"We now expect investment relating to the earthquake will not start in earnest until the second half of 2012. This represents a delay of six to nine months compared with the Budget Update."
Details of the hike came as the Government opened its books today ahead of next month's election.
Treasury predicts the reconstruction work in Canterbury will gather momentum over 2012 and 2013, creating more jobs and business investments.
Throughout New Zealand unemployment is set to fall from 6.5% to 4.7% in March 2016.
Economic growth of 2.3% is forecast this year and an average of 3% over the next four years.
Treasury also predicts more than 150,000 new jobs and average annual wage growth of almost 4% between 2012 and 2016.
In the Budget, Treasury predicted an extra 170,000 new jobs over the forecast period.
The Finance Minister Bill English says the new estimate of 150,000 jobs recognises that actual jobs are already 20,000 ahead of Budget forecasts.
English said the Government is still on track to be back in surplus by 2014.
"Getting back to surplus as soon as possible is one of the most important things the Government can do to lift national savings and rebalance the economy towards our productive sector," he said.
"However, while New Zealand is relatively well placed, the global waters are getting rougher. This is reflected in Treasury's forecasts for trading partner growth, which have been revised downwards."
The lower global growth outlook is expected to keep interest rates lower for longer - reducing financing costs for mortgage holders, businesses and the Government, English said.
Household saving is expected to continue to strengthen after becoming positive in the past year for the first time in over a decade, he said.
This will have a dampening effect on growth in the near term, but build a stronger platform for future growth, English said.
Posted by seemorerocks at 16:18