Will Bangkok's Floods Swamp the Government?
by Lennox Samuels 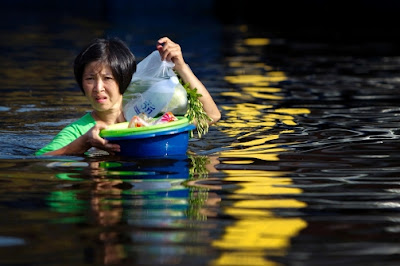 the Daily Beast
Oct 22, 2011 1:57 PM EDT
As the waters rise in Thailand, the administration has been pummeled in the media for being confused, unhelpful, unprepared, and generally clueless. Lennox Samuels reports.
Some of the busiest workers in Bangkok these days have to be the men who stack sandbags and erect brick or cement barriers at public buildings, businesses, and private dwellings. Crews wielding trowels or hefting heavy sacks can be seen around the city, hired by people worried that Thailand’s deadly floods could enter the capital any minute.
And yet, the city also displays a business-as-usual brio: Even as workers at an apartment block along Sathorn Road sealed off large doors leading to the building’s basement, at the Marriott right next door, residents frolicked heedlessly in a swimming pool.
The differing responses to the flooding threat have a lot to do with the mixed messages the government has sent in recent days. The young administration of Prime Minister Yingluck Shinawatra has been pummeled in the media for being confused, unhelpful, unprepared, and generally clueless.
Days ago, Yingluck told the nation the central city would be spared serious flooding. Last Friday she said there was no need to declare a state of emergency—only to invoke the country’s disaster prevention law a few hours later, assuming sweeping powers to deal with flood relief operations.
By Saturday, she was on her radio show, exhorting Bangkok residents not to panic, but telling them they should prepare for possible flooding. She also suggested that people at risk move their belongings to higher ground. Many have already done so with their vehicles, converting some elevated roadways and overpasses into car parks—and a safety risk if serious flooding does occur.
A national police major general who asked not to be identified told The Daily Beast the city could end up under three feet of water in places, although he also said “the next two days will be the test” and that if the city made it through that period, it likely would avoid the brunt of the flooding. “We just have to wait and see,” he said wearily.
For now, the bloated Chao Phraya river has surged beyond its banks in some spots, including near Saphan Taksin, a major bridge linking the Bangkok and Thonburi sides of the sprawling metropolis. Authorities have closed off areas around Khao San Road, a district popular with backpacking foreign tourists. Rangsit, a district in Pathumthani province just outside Bangkok, has been under water for days now. Floodwater in outlying areas may reach six feet, the major general said.
Even as workers sealed off large doors, at the Marriott right next door, residents frolicked heedlessly in a swimming pool.
Prime Minister Yingluck has ordered the defense ministry and army to protect key facilities such as the Grand Palace—previously the residence of monarchs and now a major tourist attraction—and Siriraj Hospital, where the ailing King Bhumibol Adulyadej, 83, resides most of the time. Also on the priority list are the city’s two airports, Suvarnabhumi and Don Mueang.
The nationwide flood-related death toll has risen to more than 350, and the prime minister said on the radio that more than 110,000 people are living in temporary shelters, with more than 1,700 evacuation centers set up in flooded provinces.
Hundreds of thousands of people are out of work, many employed in industrial parks, including factories that produce Toyota and Honda vehicles. The commerce ministry has said it expects half of those parks to be back in operation within 45 days once the water starts receding. But even that less-than-optimistic projection is unreliable, considering the prime minister also said on the radio that it may take six weeks for floodwaters to recede.
Already in Bangkok, the chilling effect of the flooding fears is visible. Many bars, restaurants and clubs in the tourist-friendly Silom district go almost empty now, especially during weekdays. “It’s been terrible,” said Nat Pengpit, glumly surveying the handful of people in his popular Sphinx bar/restaurant. “The media reports have really kept people away.”
He also could blame the downturn on the vacillation of authorities—and politics. Many Bangkok residents spooked by reports of imminent inundation responded by stripping supermarket shelves of bottled water, cereal, instant noodles, and other dry foodstuffs—and staying home. The warnings may have been premature, but the impact was immediate.
Critics have blamed both the national Yingluck administration, and the local Bangkok government—and the apparent friction between the two. By invoking the disaster act, the prime minister gains precedence over provincial officials around the country in dealing with the disaster. The law actually allows prosecution of those who refuse to follow the PM’s orders, and Yingluck made it clear that she took the action as a way to streamline the overall response to the crisis.
It appeared she wanted to bring to heel the Bangkok Metropolitan Authority, which, according to reports, had been resisting her calls to open sluice gates to relieve flood pressure. Bangkok is a stronghold of politicians who have traditionally backed the Democrat party—recently defeated by the PM’s Pheu Thai party—over parties helmed by Thaksin Shinawatra, Yingluck’s elder brother who was deposed in a 2006 coup.
Critics have taken note of the apparent political tug-of-war. “Throw in a good dose of incompetence and indecision, and Thailand will surface from this biblical flood divided and spite-ridden,” commentator Kong Rithdee asserted in the Bangkok Post. Thais now restive about the handling of this latest disaster were already skeptical of the new government’s ability to deliver on its populist promises, such as raising the minimum wage. Small wonder that the prime minister is taking steps to make sure the rising waters don’t wash away her government.
Posted by seemorerocks at 09:49