Germany "Raises" €55.5 Billion, or 1% Of Its Debt/GDP Ratio, Thanks To Derivative "Accounting Error" 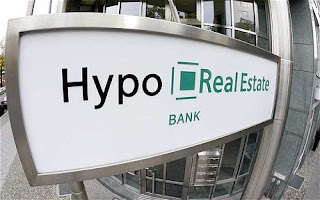 Zero Hedge,
28 O)ctober, 2011
As usual, the most surreal news of the day, perhaps week, is saved for Friday night, when we learn that Germany has magically raised over a quarter of its total EFSF obligation of €211 billion by way of what is essentially magic.
The Telegraph reports that "Germany is €55bn richer than it previously thought because of an accounting error at state-owned bank Hypo Real Estate Holding.
The mistake at "bad bank" FMS Wertmanagement, happened because collateral for derivatives wasn't netted between the asset and liability side, an FMS spokesman said. As a result, FMS will only contribute about €161bn to Germany's debt this year, down from €216.5bn in 2010."
Another way of representing the error is that it is equal to a ridiculous 1% of the country's debt to GDP ratio.
"Germany's 2010 debt-to-GDP ratio also drops, to 83.2% from the previous 84.2%, a finance ministry spokesman said."
In other words, the modern world, best characterized by the imploding fiat ponzi, has discovered a way to raise capital (electronic, naturally) courtesy of CDS bookmarking errors. And now, we have seen it all.
Since money is fungible, especially at the sovereign level, the "unlocked" capital which fortuitously was in a favorable netting direction (and we can't wait to get our hands on the detailed explanation of just what the error was that resulted in €31 in 2011 and €24.5 billion in 2010 of additional "debt" issuance going to fund FMSW, also known as Germany's bad bank, and now effectively being unwound) can and will used to plug bad Greek debt shortfalls at any other wards of the state which has material exposure to bad debt.
Such as partially nationalized Commerzbank, which as we noted yesterday by way of German FAZ, is dumping all of its PIIGS (and potentially US) bond exposure into a bidless market with the same urgency as US banks offloading subrpime paper in the summer of 2007, in order to preserve liquidity and raise capital.
Most importantly, this is also money that amounts to over 25% of the German obligation toward the EFSF of €211.
So while one can dream up ridiculous stories of €55 billion accounting errors, the reality is that the source does not really matter: after all these are merely electronic ones and zeros.
And the next time Germany needs to "raise some electronic cash" to fund even greater PIIGS related shortfall, it will simply find even greater "accounting errors" which magically give justification to shift a liability to an asset, and thus validate what is effectively non-sterilized printing of euros at the national level!
Is this merely an appetizer of things to come, and an explanation of how Europe will "fund" the hundreds of billions in capital shortfall once the PIIGS start falling left and right like dominoes, tipped over by what is now the Greek default of October 27, 2011? Of course not: certainly this is nothing more than an innocent accident (for €55 billion) and anyone claiming otherwise is a conspiratorial anarchist.
More from the Telegraph on this stunning development:
The ministry spokesman didn't directly comment on the accounting error, but said "the German government welcomes the substantial progress FMS Wertmanagement has made in reducing the portfolio it took over from Hypo Real Estate a year ago".
"In addition, it is positive that total assets, which include derivatives and hedging transactions, could be reduced by more than €30bn, or almost 10pc, compared with the 2010 results," the ministry spokesman added.
BBC has more:
The discovery was made earlier this month but only announced on Friday.
HRE faced a severe liquidity shortage in the wake of Lehman Brothers' bankruptcy in 2008.
The German government provided the bank with capital injections of 10bn euros and liquidity guarantees amounting to 145 billion euros before nationalising it.
And the truly good news is that with roughly one quadrillion in derivatives floating out there, the bulk of which nobody has any clue what they are, where they are, and what they are collateralized by, it means that the world is free to find derivative-based "errors" which can magically fund well over two times the global debt which at last check was about $500 trillion. At the end of the day, no one is the wiser: after all this is merely the creation and destruction of electronic ones and zeros in the span of nanoseconds in one computer's random access memory.
Posted by seemorerocks at 19:11