Corbett Report - Fukushima Update 10-28-2011
In today's Fukushima Update we take a look at some potentially worrying news from Fukushima, we note how the mainstream media is just now noting the study of how much Xenon and Cesium were really released (a study we noted three days ago), and we examine a new editorial about complacency with nuclear power called "The Day Before Fukushima."

INVISIBLE MENACE
Radiation Cleanup Confounds Japan
Wall Street Journal,
31 October, 2011
KORIYAMA, Japan—Nearly eight months after the Fukushima Daiichi nuclear accident scattered radioactive material over surrounding communities, Japan still is struggling to figure out how to clean up the mess, exacerbating fears about health risks and fanning mistrust of the government.
Government guidelines provide scant detail about the $14-billion-plus effort. A new cleanup law doesn't take effect until January. Cities across Fukushima prefecture are scraping contaminated topsoil off school grounds and parks, but Tokyo hasn't yet decided where to store the tainted material. Frustrated residents of some towns have planted sunflowers in a fruitless effort to suck radioactive cesium out of the farmland.
For article GO HERE
Fukushima nuclear plant could take 30 years to clean up
Removal of fuel rods and decommissioning of reactors could take decades, warns Japan's atomic commission 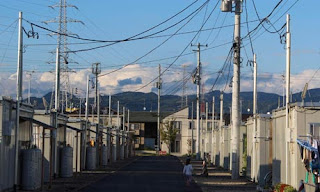 the Guardian,
Experts in Japan have warned it could take more than 30 years to clean up the Fukushima Daiichi power plant.
A panel set up by the country's nuclear energy commission said the severity of the accident meant it would take decades to remove melted fuel rods and decommission the plant, located 150 miles north of Tokyo.
The commission called on the facility's operator, Tokyo Electric Power (Tepco), to begin removing the fuel rods within 10 years. The damage to Fukushima is more difficult to repair than that sustained at Three Mile Island, where fuel removal began six years after an accident in 1979.
Work to decommission four of Fukushima's six reactors could start this year if Tepco brings the plant to a safe state known as cold shutdown.
The utility will begin by removing spent fuel from storage pools within three years of making the reactors safe, before beginning the more difficult task of removing melted fuel from the three reactors that suffered meltdown.
While radiation emissions have dropped significantly since the 11 March earthquake and tsunami, workers continue to operate in highly dangerous conditions.
Towns near Fukushima have responded cautiously to plans to build temporary storage sites for massive quantities of radioactive debris generated by the accident.
Almost eight months after the start of the crisis the government says the facilities will not be ready for at least another three years. In the meantime, towns will have to store the contaminated waste locally, despite health concerns.
To reach its target of halving radiation levels within two years the government will have to remove large quantities of soil. Scraping 4cm of topsoil from contaminated farmland in Fukushima prefecture would create more than 3m tonnes of waste, says the agriculture ministry, enough to fill 20 football stadiums.
Once completed, the storage facilities would hold soil and other contaminated waste for up to 30 years, local reports said.
"We have been aiming to start cleaning up as soon as possible," Toshiaki Kusano, an official in Fukushima city, told Reuters. "To do so we need to talk about where to store the waste, but we have not been able to answer the question residents are asking: how long it was going to stay there?"
Fukushima city, 35 miles from the nuclear plant, contained enough radioactive waste to fill 10 baseball stadiums, he said.
The government has so far earmarked 220bn yen (£1.75bn) for decontamination work, with an additional 460bn yen requested for next year. But according to one estimate the operation could end up costing 1.5tn yen.
Much of the early decontamination work has been performed by local authorities and volunteers, although neither has found a satisfactory means of storing the waste. The central government is not expected to take control of the cleanup operation until a decontamination law is passed in January.
The decommissioning report was released as another government panel set up to determine the cause of the accident said it would invite opinions from three overseas experts early next year.
The panel has already come under fire after it emerged that of the 340 people it has interviewed so far, not one was a politician involved in the handling of the crisis.
Posted by seemorerocks at 11:45