St Paul's says it has closed for safety reasons, but protesters insist they cannot be moved on without court order 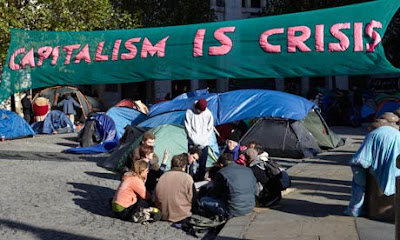 the Guardian,
21 October, 2011
Anti-global finance protesters were refusing to quit their camp outside St Paul's Cathedral on Friday night, despite requests from church officials who complain they have been forced to shut the building for the first time since the second world war.
The Occupy the London Stock Exchange protesters, who moved on to an area at the front of the cathedral a week ago, will continue their encampment in defiance of the dean of St Paul's, the Rt Rev Graeme Knowles, who asked them to "let the cathedral get its life back".
The movement said cathedral officials were more concerned about visitor numbers than the safety reasons they claimed lay behind the shutdown. The refusal has led to a standoff between the cathedral and the protesters, who say they cannot be moved on without a court order.
Knowles said the decision to close the cathedral was unprecedented in recent times, but there was no choice and it had been done with a "heavy heart". Services have been cancelled until further notice and staff have been sent home.
In a statement Knowles said he had asked protesters to "recognise the huge issues facing us at this time and asking them to leave the vicinity of the building so that the cathedral can reopen as soon as possible". He stressed that he and other officials had formed good relations with the protesters.
For article GO HERE
Posted by seemorerocks at 18:42