Police fire tear gas after protesters throw rocks
AJC
26 October, 2011
OAKLAND, Calif. — A crowd of protesters in Oakland, Calif., that had gathered in front of City Hall amid a heavy police presence has scattered as authorities have fired tear gas in response to rock throwing from some of the demonstrators.
The police action is the second such incident in as many hours. Officers in riot gear briefly dispersed a crowd heading back toward the downtown area where an Occupy Wall Street encampment was dismantled earlier in the day.
Authorities are denying reports that they used flash bang canisters to help break up the crowd, saying the loud noises came from large firecrackers thrown at police by protesters.
The Tuesday evening skirmishes come after police removed about 170 demonstrators who had been staying overnight on a plaza outside City Hall for more than two weeks. City officials say 85 people were arrested in the morning raid.

This morning at 5am over 500 police in riot gear from cities all over central California brutally attacked the Occupy Oakland encampment at 14th & Broadway. The police attacked the peaceful protest with flash grenades, tear gas, and rubber bullets after moving in with armored vehicles. Apparently the media was not allowed in to document this repression, and the police established barricades as far apart as 11th and 17th. Over 70 people were arrested and the camp gear was destroyed and/or stolen by the riot police.
Contact the mayor and tell her what you think of her actions.
Reconvene today at 4pm at the Oakland Library on 14th & Madison. Occupy Oakland is not finished, it has only begun. 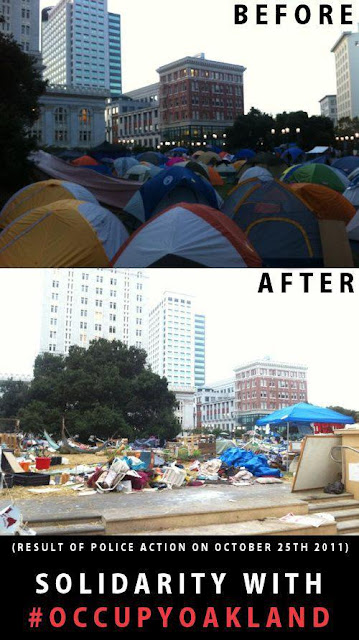