Watch Merkozy Cracking Up Following Question If Italy Can Implement Reforms
Zero Hedge
23 October, 2011
Even our non-polyglot readers will have zero problems understanding the response (in French) by Merkozy, when asked during the press conference, whether Italy, which has the second largest debt load in Europe at $2.2 trillion and inches behind German, will succeed in implementing promised 'reforms.' The wholesale laughter 19 seconds in the the clip, by not only the entire audience, but by Merkel and Sarkozy pretty much explains what the "next steps" in Europe are as the continent has now given up any pretense it is even trying to keep a serious facade on the upcoming serial defaults... and why 10 Year BTPs will need much more than just the SMP, EFSF and the hand of god to stay above 90 in the coming week.

As for the question of why Italy provokes laughter, we are not too sure. After all, as Italy goes, so does the world.
As a reminder... 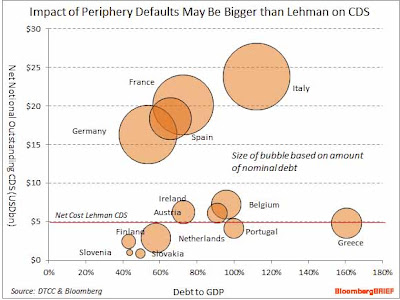 And...the truth about Italy:
• Morgan Stanley estimates net issuance should total 35 billion euros per year in 2012-2013, less than expect annual coupon payments of around €45 billion per year
• A total of €157 billion in Italian government paper will fall due by the end of the year. Redemptions will peak in September, when €46 billion of BTP CTX bonds mature
• Italy has raised €277.4 billion euros in debt so far in 2011, or 65.3% of its full-year target, the Treasury said - suggesting further issuance of €147.4 billion, according to Reuters calculations
• Italy's public debt stood at €1,890 billion at the end of April, according to Bank of Italy figures. The public debt figure includes postal savings
• Italian government bonds and short-term bills totaled €1,583 billion at the end of June according to Italian Treasury data. Their average term was 7.09 years
• A one percentage point increase in Italy's debt yields adds about €3 billion euros to interest payments in the first year, and twice that in the second, the Bank of Italy has said
• Italy forecast in April that 2011 debt servicing costs would total 4.8% of GDP, or about €77 billion
• The International Monetary Fund estimated in April that 47% of Italian 2010 government debt was held abroad. Morgan Stanley last week estimated foreign holdings at 44%
• Banks domiciled in Italy held €192 billion in Italian government securities at the end of May, Bank of Italy data showed last month. In the first quarter of 2011 they also held €589 billion euros in government securities on behalf of their clients
• European Banking Authority data showed in July that Italy's five lending retail banks had a net direct exposure to Italian sovereign debt of €159 billion. Intesa Sanpaolo is the most exposed with €57.6 billion, followed by UniCredit with €47.5 billion
• Morgan Stanley said domestic banks and insurance companies could quite easily buy net €60 billion a year in Italian government debt for the next few years
• JP Morgan analysis said Italian banks will have to refinance €53 billion of maturing bonds in wholesale markets next year
• The €600 billion Italian pension fund and insurance industry has increased its holdings of domestic government bonds by 10% in the last three years to 32% of assets, according to JP Morgan
• Analysts estimate that an increase in the average cost of Italian public debt drives a similar rise in the cost of banks' bond issues
• JP Morgan and Morgan Stanley analysts estimate Italian banks' holdings of government bonds at around 6% of their assets - a higher figure than 5% for Spanish banks and second only within the euro zone to Greek banks' 10%
Posted by seemorerocks at 09:31