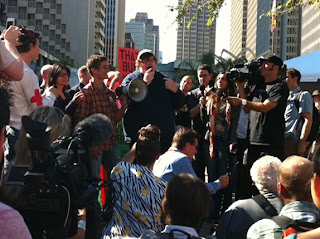 MSNBC,
28 October, 2011
Left-wing filmmaker Michael Moore told hundreds of anti-Wall Street protesters in front of Oakland's City Hall on Friday that the events there over the past week have helped change the national discussion about the movement.
Moore, who flew in from New York, said the Occupy demonstrations are "a movement of equals," and that everyone had something to offer.
The director of "Fahrenheit 9/11" and "Bowling for Columbine" said the movement will not tolerate violence against demonstrators, referring to Iraq War veteran Scott Olsen, who was badly injured during a clash between protesters and police.
Moore urged the protesters, many of whom are demonstrating against what they see as a growing disparity between rich and poor, to continue their movement until they run the country.

ARRESTS IN SAN DIEGO AND NASHVILLE 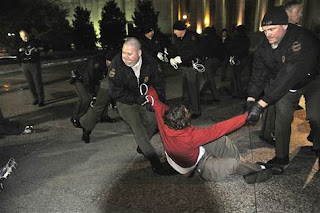 MSNBC,
28 October, 2011
In San Diego, police arrested 51 people as officers cleared out economic demonstrators who occupied the Civic Center Plaza and Children's Park for three weeks. Dozens of police officers and San Diego County sheriff's deputies descended on the encampment around 2:30 a.m. Friday, declared an unlawful assembly and removed tents, canopies, tables and other furniture.
Occupy Nashville protesters defied a new curfew a day after they were forced off the Tennessee Capitol grounds because a new curfew was set.
Several dozen people remained on the grounds after the new curfew passed Friday at 10 p.m. There was no noticeable police presence and it was not immediately clear whether authorities planned to make arrests if the protesters stayed throughout the night.
Twenty-nine protesters were taken into custody at shortly after 3 a.m. Some were dragged from the campsite they've occupied for about three weeks.

Tents return to Occupy Oakland protest site
Mercury News,
28 October, 2011
OAKLAND, Calif.—Anti-Wall Street protesters in Oakland have erected more than two dozen tents in a plaza declared off limits for overnight camping, vowing to remain at the site despite city orders to vacate.
Protesters began pitching the tents Thursday evening, according to Shake Anderson, an organizer with Occupy Oakland. On Friday morning, about 25 tents were up at the plaza near City Hall, where police armed with tear gas and beanbag rounds disbanded a 15-day-old encampment two days earlier.
Oakland Mayor Jean Quan had issued a statement asking protesters not to camp overnight at the plaza.
For an unpdate on Occupy San Diego GO HERE 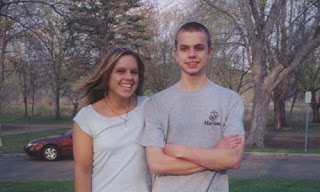 the Guardian,
28 October, 2011
Scott Olsen, the Iraq war veteran who was seriously injured by a police projectile during a protest in Oakland, has regained consciousness but "cannot talk".
Olsen, 24, is communicating with friends and family at his bedside by writing notes, but his injury is believed to have damaged the speech centre of his brain, according to Keith Shannon, who served with Olsen in Iraq.
Olsen is believed to have been injured by a police projectile. He was hit in the forehead in downtown Oakland on Tuesday evening, after marching with fellow demonstrators to protest the closure of an Occupy Oakland camp in the city.
"He cannot talk right now, and that is because the fracture is right on the speech center of his brain," said Shannon. "However, they are expecting he will get that back."
Shannon added that Olsen's "spelling is not near what it used to be".
"The doctors expect that he will have a full recovery," said Shannon, who is due to visit Olsen on Friday afternoon. "However, it is going to be a long road ahead for him."
Olsen was "really happy" to see his family, Shannon added.
A spokesman for Highland General Hospital confirmed Olsen could not talk, but said he "understands everything" doctors and family are saying. His family flew to be at his bedside on Thursday. The spokesman said Olsen remained under observation to determine if he needs surgery. His condition is "fair".
Video footage posted to YouTube shows Olsen lying motionless in front of a police line after apparently having been hit. A group of up to 10 protesters gather around him, but a police officer can be seen throwing a device close to the group which then explodes with a bright flash and loud bang, scattering the protesters. The video then cuts to footage of protesters carrying Olsen away as he bleeds from the head.
Oakland Mayor Jean Quan, who was in Washington DC when the clashes occurred, has sought to distance herself from the police action.
"I only asked the chief to do one thing: to do it when it was the safest for both the police and the demonstrators," she said.