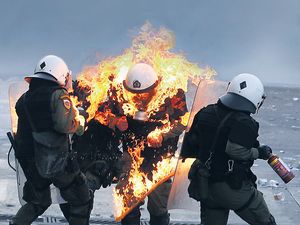 You have to delve fairly deep to find this - the world is still obscessed with Libya and Gaddafi (and New Zealand with the Rugby World Cup).
This was today’s headline from the Guardian.
“Muammar Gaddafi's 'trophy' body on show in Misrata meat store”
and the New Zealand Herald
“Martin Snedden: Thank you  New Zealand” 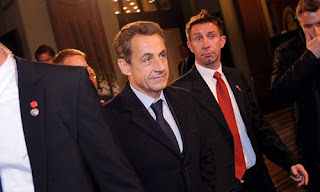 Europe in disarray with France & Germany divided
Leaders admit 'make-or-break' meeting has no chance of success as second summit is convened for next week
the Independant, 21 October, 2011
Eurozone leaders conceded last night that there are still huge divisions on how to solve the bloc's burgeoning debt crisis and that there is no chance of agreement by the end of Sunday's summit, which was originally slated as a make-or-break meeting.
The disarray continued last night when France and Germany announced they would schedule a second summit of EU leaders to take place "by next Wednesday" in order to put in place a deal on the expanded EU bailout fund.
The decision, made apparently without prior consultation with other EU leaders, caused surprise in Brussels. It was also unclear if Sunday's planned meeting would be shelved altogether. Summits should normally be called only by the EU President, Herman van Rompuy, and are held at massive cost, with an army of security personnel and police drafted in. "We were not informed," said one dumbstruck EU diplomat. Another said: "It's about time the French and Germans stopped talking just to each other and starting informing the rest of the world."
The deepening Franco-German row over bailout funding grew on Wednesday after Nicolas Sarkozy made an unscheduled trip to Berlin and admitted afterwards that France and Germany were at odds over how to strengthen the firepower of the recently agreed bailout fund.
Yesterday there was no sign that the Franco-German impasse was anywhere near being broken. German MPs followed Chancellor Merkel in opposing French proposals to turn the European Financial Stability Facility (EFSF) into a bank which could obtain funding directly from the European Central Bank and thereby substantially increase its financial clout.
Wolfgang Schauble, Ms Merkel's veteran Finance Minister, flatly rejected the French proposal yesterday saying "This is not up for discussion." He said Germany would not agree to further EFSF funding beyond levels already agreed by parliament: "There will be no expansion", he said.
Germany's opposition Social Democrats added to the prevailing atmosphere of alarm by demanding that the whole EFSF package should be voted on again by the German parliament if it was altered in any way. Disagreement between Paris and Berlin and growing political turmoil at home caused the Merkel government to threaten to postpone this weekend's Brussels summit.
The chaos caused by Franco-German row was exacerbated yesterday by a new dispute between the European Union and the International Monetary Fund. The IMF was reported to be demanding that approval of the next tranche of financial aid to Greece should be delayed until after the weekend's EU summit.
Brussels officials were quoted as saying that the IMF considered the EU's projections for Greece's debt reduction programme to be "too optimistic" and that it wanted to see if Sunday's meeting clarified the issue.
Greece faces default next month unless it receives its next €8bn tranche of bailout money from the EU and the IMF. Analysts have warned that if Athens is allowed to default on its debt, the larger eurozone economies of Italy and Spain could also be pulled into the financial quagmire causing severe repercussions throughout the global banking system.
However, nothing like hope!
Shares soar on eurozone deal hopes
the Independant,
21 October, 2011
Shares in London soared higher on hopes that politicians could hammer out a deal to ease the eurozone debt crisis by next week.
A Sunday deadline for decisive action is now unlikely to be met, but traders gambled that a second meeting of European leaders next week will deliver radical measures to shore up the region's financial system.
The FTSE 100 index jumped by almost 2% or 103 points to 5488.6, its highest closing level since early August.
Other European stock markets also rose strongly with the CAC 40 in France and the Dax in Germany rising by 2% and 3% respectively.
For article GO HERE
D- Mark in Germany?


Meanwhile the Financial Times in Germany featured the DM on its front page, and even quoted its price as DM4.11.  See Zero Hedge article HERE

However, the actual headline was:
Es gibt kein Zurück zur D-Mark!
which translates as something like
There is no way back to the D-Mark