Occupy Wellington told to move for All Blacks 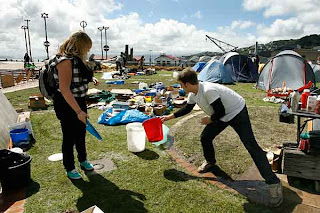 Stuff,
25 October, 2011
Occupy Wellington protesters may be forced to move out to make way for the All Blacks parade.
Wellington City Council spokesman Richard MacLean confirmed protesters had been warned today they may have to vacate Jack Illot Green and make way for the expected 5000 odd rugby fans.
It's basically about the logistics and how we are going to get the All Blacks in and out of there, MacLean said.
He said a final decision would be made by the end of today and if the protesters refused to move MacLean said "we will move them".
It is possible that the protesters may be able to keep their site on the City to Sea Bridge, he said.
Up to  50,000 rugby fans are expected at the parade tomorrow which begins at Civic Square and travels to Parliament.
About 40 tents are pitched on both upper and lower grass areas of Civic Square and protesters were hoping to roll out the welcome mat.
Occupy Wellington hospitality volunteer Cole Gunn said they hope they can keep the Wharanui and Kai tent on Jack Ilott Green and said they didn't want to ruin the party.
"The last thing we want to do is to piss off rugby fans," Gunn said.
Camped near to the rugby fanzone, Gunn said there had been a lot of "craziness" going on and occupiers had entered into the spirit providing face painting for rugby fans before Sunday's final.
A post on Occupy Wellington Facebook website says they want to welcome the rugby supporters and the call has gone out for more hands on deck, home-baking, tea, coffee and milk to supply the hordes.
Student Matt Leathers has been camping "on and off" and said support had been steadily growing with yesterday's "Day of Action" the most productive day yet.
The day included workshops, talks by university lecturers as well marches down Cuba St and Courtenay Place.
Just how long do the protesters plan to stay?
"As far as I'm concerned we are going to stay here indefinitely," Leathers said.
A meeting will be held at 4pm today as Occupy Wellington decides just what they will do.
Posted by seemorerocks at 17:48