China has stressed it will not be a "saviour" to Europe as President Hu Jintao embarks on an official visit to the continent that will take in this Thursday's crucial G20 summit in Cannes. 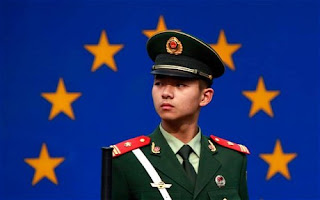 the Telegraph,
30 October, 2011
The warning came as European Commission President Jose Manuel Barroso and European Council President Herman Van Rompuy urged G20 leaders to use the meeting of major economies to address Europe's debt crisis, saying measures proposed last week were not enough by themselves.
French President Nicolas Sarkozy has said Beijing had a "major role to play" in proposals to expand the European Financial Stability Facility (EFSF) to €1 trillion (£877bn), possibly through a special purpose investment vehicle that would attract backing from sovereign wealth funds.
The head of the bail-out fund, Klaus Regling, was despatched to Beijing to discuss terms, but travelled on to Japan at the weekend without an agreement.
China, holder of the world's largest foreign exchange reserves at $3.2 trillion, said it wanted more clarity before investing.
The official Xinhua news agency, used to communicate Communist Party policy, said Europe must address its own financial woes. "China can neither take up the role as a saviour to the Europeans, nor provide a 'cure' for the European malaise," it stated. "Obviously, it is up to European countries themselves to tackle their financial problems."
Chinese officials also sought to play down hopes of a breakthrough at the G20. Vice Finance Minister Zhu Guangyao said that investment in the bail-out fund was not on the agenda at present.
European leaders remain under immense pressure to provide more detail about the terms of last week's refinancing proposals, which are set to cut Greek debts by 50pc, and see a €100bn recapitalisation of eurozone banks.
Charles Dallara, managing director of the Institute of International Finance and chief negotiator for the Greek bondholders, said at the weekend that he remained "very optimistic that more than 90pc will participate" in the deal.
Italian Prime Minister Silvio Berlusconi also pledged to tackle Italian debts by selling €5bn of state assets and raising the country's retirement age from 65 to 67. He acted to shore up his domestic position yesterday by stating that he would lead the reforms. "Only I and my government can achieve this reform programme for 18 months, which is why there is no way for me to stand aside," he said.
Posted by seemorerocks at 11:51