Floods in Southeast Asia May Cause Food Shortages, UN Says

Oct. 24 (Bloomberg)
The United Nations is closely monitoring the potential for “serious food shortages” in parts of Southeast Asia after flooding devastated rice paddies and other crops and as aid deliveries are disrupted.
About 12.5 percent of rice farmland in Thailand has been damaged, along with 6 percent in the Philippines, 12 percent in Cambodia, 7.5 percent in Laos and 0.4 percent in Vietnam, as storms hit the region since September, the UN Food & Agriculture Organization said in a report dated Oct. 21. “There are concerns of serious food shortages in the affected communities due to the difficulties in delivering food assistance.”
Crop losses may help sustain a 20 percent rally in rice futures in Chicago this year, adding pressure on food costs and creating more problems for government leaders across Asia, where the grain is the main staple, said Lynette Tan, an analyst at Phillip Futures Pte. The UN Food Price Index of 55 commodities, including cereals, meat and dairy, rose to a record in February.
“We expect rice prices to propel higher, climbing a wall of worry underpinned by strong physical demand,” Tan said from Singapore today.
Thailand, the world’s largest rice exporter, was forecast to account for 31 percent of the 34.2 million metric tons of global trade of the grain this year, according to the U.S. Department of Agriculture. Vietnam is the second-largest shipper, according to the USDA. Cambodia was the third-largest exporter in Southeast Asia, while the Philippines was the largest buyer last year, according to the USDA.
Prices Jump
Rough-rice for January delivery climbed 3 percent to $17.215 per 100 pounds at 2:42 p.m. Singapore time, the highest price for a most-active contract on the Chicago Board of Trade since Sept. 21. The export price for the 100 percent grade B Thai white rice, the benchmark in Asia, gained 1 percent to $625 per ton on Oct. 19, taking this year’s advance to 13 percent.
Thailand may lose 6 million tons of rough rice from flooding, paring the main harvest to about 19 million tons, Apichart Jongskul, secretary-general of the Office of Agricultural Economics, said Oct. 21. The damage estimate does not include rice in warehouses that have been submerged, he said.
The country’s main harvest, which typically accounts for 70 percent of annual production, was projected by the farm ministry at 25.8 million tons before the floods.
Infrastructure Damage
Floods have inundated more than two-thirds of the country, causing loss of lives, damage to crops and livestock, closure of factories and severe damage to infrastructure, the FAO said in the e-mailed report.
In Bangkok, residents are stocking up on water, canned food and instant noodles as Prime Minister Yingluck Shinawatra said a “huge amount” of water is flowing into Bangkok due to a broken water gate on the city’s outskirts. Further north in Ayutthaya, families struggled to find food and potable water in floodwaters that reached neck high.
The Philippines lost almost 600,000 tons of milled rice from typhoons that struck the country this year, Lito Banayo, administrator of National Food Authority, said Oct. 20. That’s equal to almost 17 days of demand, according to Bloomberg calculations, based on the national daily consumption.
About 16 percent of the nation’s paddy production was lost to flooding, and at least 485,000 hectares (1.2 million acres) of land planted with the grain, corn and high-value crops damaged, while almost 3.3 million head of livestock and poultry were affected, the FAO said
.
In Cambodia, which was forecast by the USDA to ship 1 million tons of rice this year, the FAO said 1.2 million people were affected by flooding that destroyed homes and damaged paddy fields. Before the flooding, Cambodia was forecast to increase production by 7.2 percent from a year earlier, to a record 8.9 million tons this year, FAO said. 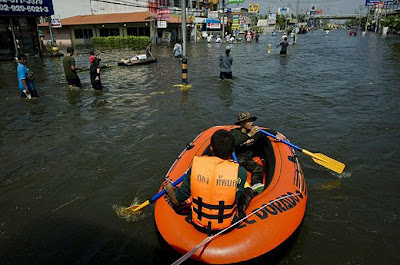 Authorities declare holiday as more areas in Thai capital get inundated, forcing thousands to move to higher ground.
Authorities have said floodwaters in Thailand have begun entering the north side of Bangkok's second airport used for domestic operations, forcing at least one airline to suspend flights.
For article GO HERE
Posted by seemorerocks at 21:12