Summits that are supposed to solve the European debt crisis take place in the next 24 hours. 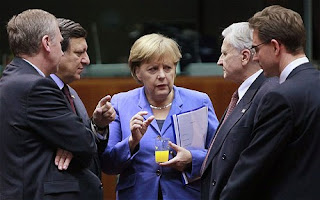 Eurozone debt crisis: talks break down as Angela Merkel rejects rescue deal
Rows between Europe’s leaders threatened to undermine attempts to rescue the eurozone as it emerged that a make-or-break summit will not address key aspects of the deepening crisis.
the Telegraph,
25 October, 2011
As Germany raised fresh objections to the proposed rescue deal for indebted eurozone countries, the International Monetary Fund signalled it was considering stepping in - a move that could lead to British taxpayers paying to support the single currency.
Amid mounting Coalition tensions over Europe between the Conservatives and Liberal Democrats, David Cameron will today travel to Brussels, where European Union leaders have promised to hammer out a deal to resolve Europe’s debt crisis.
But officials admitted last night that many of the details of any deal will not be resolved tonight and will have to wait for another meeting of EU finance ministers at the weekend.
The gloomy outlook worried financial markets. The FTSE 100 index closed down at 5525, and shares in Germany, France and the US all fell.
The single currency rescue effort was left hanging in the balance last night as Germany and Italy both challenged aspects of the likely deal.
EU leaders have said a summit tonight will outline plans to cut Greece’s crippling debt burden and expand a bail-out fund meant to support larger EU economies such as Italy and Spain.
Yet leaders last night appeared to be little closer to settling their long-standing differences on those issues.
The biggest row centres on the role of the European Central Bank in bailing out struggling eurozone economies.
A draft agreement circulated among leaders yesterday suggested that the ECB should go on buying the bonds of troubled members, effectively lending money to them directly.
The ECB’s bond-buying programme is unpopular in Germany, where critics fear it will compromise the central bank’s independence and its ability to control inflation.
Angela Merkel, the German chancellor who is facing fierce domestic opposition to the rescue deal, yesterday publicly rejected the draft as “not acceptable to Germany”.
The German parliament will today vote on a motion that would tell the ECB to stop its bond-buying programme.
Meanwhile, there were fears that the Italian government of Silvio Berlusconi could collapse over a dispute about austerity measures demanded by other EU governments.
In exchange for supporting Italy’s bonds, the EU has told Italy to increase its retirement age.
The Northern League, Mr Berlusconi’s junior coalition partners, oppose the plan. The party’s leader, Umberto Bossi, yesterday suggested the government could fall over issue and said he was “pessimistic” about its survival.
In Brussels, the European Commission insisted that Mr Berlusconi must do more to balance his country’s budget. Italy still needs to back up Mr Berlusconi’s promises with “specific actions” taken with “clear timing,” the commission said.
The summit tonight is also intended to agree on ways to boost the financial power of bail-out funds meant to underwrite governments in Italy and Spain if they struggle to raise money on international markets. One option is a Special Investment Vehicle, a fund that raises money from investors including wealthy governments and the IMF.
Eurozone attempts to cut the Greek debt burden also appeared to be making little progress, though the Greek government expressed hopes that the summit will announce that bond-holders will lose 50 per cent of their stakes.
Sir Mervyn King, the Governor of the Bank of England, suggested the EU leaders’ emergency measures can buy time but cannot resolve the fundamental threats to European economic stability.
Berlusconi's coalition on verge of collapse
Threat of government collapse comes with Italy squeezed by eurozone partners over its $2.5 trillion debt pile. 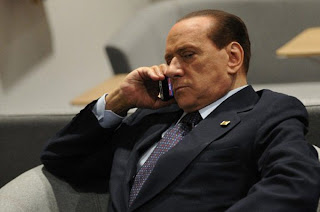 al Jazeera,
25 October, 2011
Silvio Berlusconi, the Italian prime minister, is struggling to secure support for an emergency growth plan, which the EU wants within hours and which could cause the collapse of his coalition government.
The threat of a government breakdown comes as Italy takes centre stage in the eurozone crisis, with concerns mounting over its ability to keep from losing control over a $2.5 trillion debt pile and putting the entire bloc at risk.
Eurozone governments on Tuesday were trying to come up with a comprehensive plan to tackle their debt crisis by Wednesday. As part of that, they demanded late on Sunday that Italy draft new economic measures, arguing it would be pointless to protect the country from market turmoil if it didn't pull its own weight.
The EU wants Italy to raise its standard pension age from 65 to 67, change the legal system to encourage investment and pass other reforms to improve growth.
Officials from EU governments have said they will not present their comprehensive plan, upon which global markets are pinning their hopes for the survival of the euro, if Italy doesn't agree to new economic measures.
Berlusconi, mired in scandal and facing sliding approval ratings, has survived a series of confidence votes but analysts widely believe he cannot last much longer, with many expecting elections next spring.
'Very dangerous'
Berlusconi has found little support within his own coalition. He faces resistance from his ally, the Northern League, a minority coalition party led by Umberto Bossi and without whose support his government would fall.
Bossi himself conceded that the government is at risk. "Let's say the situation is difficult, very dangerous. This is a dramatic moment,'' he told reporters in Rome.
The Northern League, a regional party with a constituency that includes many small business owners and pensioners, has been firmly opposed to raising the pension age. Bossi has been under pressure from grassroots supporters disillusioned with Berlusconi.
Eurozone partners like Germany are critical of the opposition. Germany is raising its pension age to 67 and Angela Merkel, the chancellor, will have a hard time explaining to voters why Europe's largest economy should be ready to help countries whose workers retire earlier.
Perceived slights
A policy impasse this time could cost Berlusconi his power. The failure of Berlusconi's majority in parliament to pass a routine measure earlier this month showed just how tenuous his hold on power had become.
Berlusconi has reacted angrily to pressure from Germany and France to enact reforms. He issued a statement on Monday declaring that no EU country was in a position to give lessons to its partners.
Perceived slights, such as a news conference in Brussels where Merkel and Nicholas Sarkozy, the French president, exchanged ironic smiles and laughter following a question about whether they were reassured after meeting Berlusconi, have caused some bitterness in Italy.
European Commission spokesman Amadeu Altafaj said the commission had no intention of humiliating Italy but needed details on its reform plans.
'Market trust'
Analysts in Italy have cautioned that the collapse of the ruling coalition could bring months of political deadlock until a new parliament is elected.
It would be up to Giorgio Napolitano, Italy's president, to decide to retain Berlusconi in power pending new elections, or install a technical government, which also would require the co-operation of parliament.
"I believe at this moment, a government crisis would be a disaster, because in the next months we have a huge quantity of debt that needs to be refinanced. A government crisis would destroy the market trust,'' said Francesco Giavazzi, an economist at Milan's Bocconi University.
Posted by seemorerocks at 17:52