Central banks have used gold's recent plunge to top up their holdings of the precious metal. 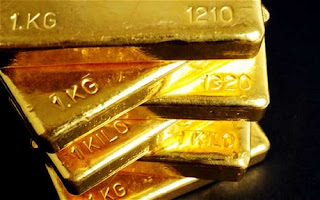 the Telegraph,
30 October, 2011
Bolivia, Kazakhstan, Tajikistan and Thailand spent a collective $1.52bn (£942m) buying 26.7 tons of gold. However, the Mexican central bank was a seller, reducing its holding by 0.1 ton, according to data compiled by Bloomberg.
Thailand's gold reserves rose 11pc to 152.41 tons and Bolivia's bullion reserves increased 17pc to 49.34 tons. Bolivia increased its holdings by 5pc to tons and Tajikistan's bullion stockpile increased 26pc to 4.74 tons.
Over the past 20 years, central banks have been reducing their holdings of the precious metal, but concerns about paper money and global debt has turned them into net buyers. Also, the gold price has increased every year for the past 11 years. The price is up 23pc in the year to date, closing at $1,743.75 an ounce on Friday.
"Central banks, especially in emerging markets, have been diversifying their gold reserves," said Michael Widmer, head of metals research at Bank of America Merrill Lynch . "We would expect this to continue as gold can have a positive impact on smoothing the risk-return profile of reserve portfolios."
The International Monetary Fund has been selling gold to boost its war chest for lending. Sales stopped in December last year.
Copper enjoys biggest weekly gain on record
Ailing Copper has finally had some medicine, in the form of Europe agreeing a rescue package and positive data on the US economy.
The metal, a barometer of global economic health, had its biggest weekly gain on record, rallying 15pc in London. Goldman Sachs analysts said copper prices could be "unimaginably" high in three years on the back of Chinese growth. Still, the patient is not fully recovered at 20pc off its February peak, which signals a bear market.
Posted by seemorerocks at 11:56