US cops tried to erase online evidence of brutality 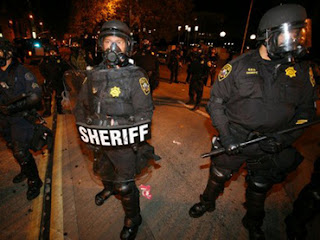 RT,
26 October, 2011
Google has been asked by a US law enforcement agency to remove several videos exposing police brutality from the video sharing service YouTube, the company has revealed in its latest update to an online transparency report.
Another request filed by a different agency required Google to remove videos allegedly defaming law enforcement officials. The two requests were among 92 submissions for content removal by various authorities in the US filed between January and June 2011. Both were rejected by Google along with 27 per cent of the submissions.
The IT giant says the overall number of requests for content removal it receives from governmental agencies has risen, and so has the number of requests to disclose the private data of Google users.
Brazil heads the first list with 224 separate demands to remove a total of 689 items from its search results, as well as from YouTube and various other services. Google says its social networking service Orkut is very popular in the Latin American country, which partially explains the number of requests.
Heading the list of countries requesting the disclosure of personal data is the United States, where a total of 5,950 submissions targeting 11,057 user accounts have been filed. Google fully or partially complied with 93 per cent of those requests. Second on the list is India, with 1,732 requests over a six-month period.
Russian officials filed fewer than 10 requests to remove content and 42 requests to disclose user information (which was the first time the number reached Google’s threshold for reporting). The company complied with 75 per cent of the Russian requests concerning content and none of those concerning user data.
Google says it hopes that its report will contribute to the ongoing public discussion on the ways the internet needs to be regulated.
Commenting on the incident, Jim Killock, executive director of the Open Rights Group, points out that YouTube is a public platform and any steps to censor it should be backed with a court order.
“Police seem to be advising Google on what material might be breaking the law, and then Google decides to censor this material without a court order,” he said, stressing that a court appearance should be part of making such judgments.
Ultimately, public media seem to becoming more of a police tool to gather evidence. Killock recalled British Prime Minister David Cameron urging the news outlets to hand over material collected during the UK riots – both published and unpublished – to the police.
“It completely compromises the freedom of the media,” Kilock told RT.
Posted by seemorerocks at 09:11