Growth is dead in UK 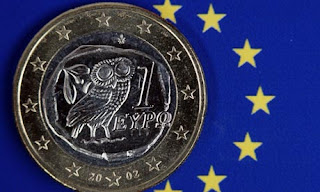 the Guardian,
23 October, 2011
Once again, it's make-or-break time for the eurozone. Wednesday's summit represents the latest, and almost certainly the last, opportunity to put Europe's sovereign debt crisis to bed before it precipitates a global slump.
It is hard to be optimistic about the outcome. The incompetence shown last week, when Sunday's meeting was put back for three days owing to a rift between Germany and France, was entirely consistent with the strategic blundering that has been in evidence since Greece first announced that it was in deep financial trouble.
Throughout, the response has been late, timid and wrong, but convenient for George Osborne, David Cameron and Sir Mervyn King because they can now blame Britain's slide into a double-dip recession on events on the other side of the English Channel.
King's speech in Liverpool last week was a case in point. The gist was that we had a nice recovery going in the UK until the little local difficulty in Greece turned into a question of whether monetary union has a future.
The Bank of England governor insisted that following the depreciation in the value of the pound and the implementation of the coalition's government's "credible" plan for the public finances "we were on track".


This simply won't wash. Growth had ground to a halt in Britain long before the situation in the eurozone went critical. Credit flows to business have been declining for at least two years. Even before Britain's important European markets started to become more difficult, there was no underlying improvement in export performance, largely because companies used the benefits of a cheaper pound to plump up their profit margins.
Danny Gabay, who runs the Fathom consultancy, has looked at the performance of the economy since the recession came to an end in 2009. His conclusion is that once you strip out the contribution made by companies rebuilding the stocks that were run down during the 7% contraction in the economy, there has been barely any increase in final domestic demand since overall output reached its trough. In the past year, it has fallen. Britain's share of world trade is smaller now than it was before the financial crisis began in 2007.
Convenient though it may be to point the finger at the Europeans, Britain's problems are essentially home-grown. Consumers are borrowing less, as they were always likely to do after a colossal debt bubble, and banks are reluctant to lend. The process of equity withdrawal from the housing market, which pumped £300bn of spending into the economy during the fat years, has gone into reverse
.
Compounding that trend, real incomes are being ferociously squeezed by a combination of high inflation and low wage growth. The monthly pay cheque buys about 4% less than it did a year ago, so it is little wonder consumer confidence is so low. Nor, for that matter, that companies are cautious about investing. With domestic spending so weak, they have more than enough capacity to meet current levels of demand.It was against this backdrop that the government decided to announce an austerity programme unmatched in its length and severity since the 1970s.
Despite the warnings, coalition ministers believed that the economy was strong enough to cope with higher VAT, cuts in capital spending and big reductions in the day-to-day spending of Whitehall departments and local government. This optimism was a bit curious, since Osborne and Vince Cable had spent a great deal of time in opposition pointing out (quite correctly) that the economy was riddled with structural problems and therefore not as robust as it looked.
Yet the cuts went ahead, accompanied by hysterical warnings that Britain was about to go the way of Greece, statements that further undermined confidence. The growth forecasts from the independent Office for Budget Responsibility have been reduced on every occasion it has passed judgement since the general election in May last year. Similarly, the Bank of England has become gloomier in every one of its quarterly inflation reports.
It has fallen to King to do something about this dire state of affairs, and the Bank has responded by announcing an injection of £75bn into the economy through its asset purchase scheme. An article in the Bank's latest quarterly bulletin estimates that the first £200bn tranche of electronic money possibly increased gross domestic product by 1.5%-2% and inflation by 0.75-1.5%.
In truth, though, the Bank can't really quantify the effects of QE; it certainly does not know how the gains and losses have been distributed. So far, the evidence from QE around the world is that it ramps up asset prices for the better off and, by its impact on global commodity prices, intensifies the income squeeze on the less well off by pushing up inflation. A Robin Hood tax in reverse, in other words.
When interest rates are at rock-bottom levels, monetary policy needs to be used more creatively. My friend and colleague William Keegan has suggested using the latest tranche to pay off consumer credit card debts. Sushil Wadhwani, a former MPC member has floated the idea of giving every adult a voucher – like the ones retailers give to their loyal customers – that they would have to spend in the next three months. A third option would be to use QE to capitalise a national investment bank. A fourth would be to have a more active fiscal policy.
Yet, what has distinguished policy – in Britain and in the euro area for the past two years – has been the absence of creativity. The European Central Bank raised interest rates in the summer and faced with evidence that the UK economy has hit the wall, Osborne says that any dilution of his budget plans would incur the wrath of the world's bond markets.


Look at it this way. If the detonation of the sub-prime mortgage crisis was the assassination at Sarajevo, a seemingly minor event that had profound global consequences, then we are now on the Western Front in late 1916 or early 1917. Hopes of a quick war have been dashed; nothing is moving; and the only idea the generals have is to carry on with attrition. In 1918, Stanley Baldwin described the new breed of Conservatives elected in the Coupon election as "a lot of hard faced men who look as if they had done well out of the war." For the protesters outside St Paul's Cathedral, there is no doubt about the identity of today's hard-faced men.
Military historians differ in their assessment of first world war generals.
Some argue that they were not actually the inflexible upper-crust nincompoops of legend, and that there was no real alternative to a strategy that in the end wore down German resistance. By this yardstick, a 15% reduction in the size of Greece's economy is a price worth paying, while a 110,000 increase in UK unemployment in the latest three months is the unavoidable collateral damage for inching forward in the battle to reduce the budget deficit. The problem for today's politicians is that, unlike the generals on the western front they have to be elected. It looks a bit like the episode of Blackadder Goes Forth in which Edmund says of the latest big push: "Haig is about to make another gargantuan effort to move his drinks cabinet six inches closer to Berlin."
Posted by seemorerocks at 10:47