“Like the issue of…’Is it better to have austerity or stimulus?’ Well, the basic problem there is that we’re not having a quality conversation on the subject.” –Ray Dalio, Bridgewater Associates, on the Charlie Rose program, October 20, 2011 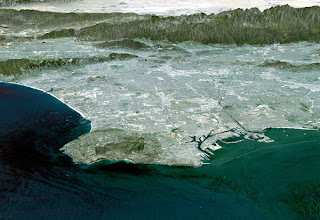 Chrismartenson.com
Probably no American city better illustrates the trajectory of post-war US growth than Los Angeles. With its ganglion of highways (built when oil cost $14 dollars a barrel) and its never-ending boulevards that, having replaced vast acreages of citrus, now light up the night sky, the City of Angels spent 40 years blowing past its old pre-war borders and filled up an entire geological basin with infrastructure.
The scale of this expansion can be seen in this very helpful satellite photo, above, from NASA, which captures a sweeping view of Los Angeles County. For example, Hollywood, a common reference point for most Americans, is reduced to a small village from this perspective; a mere data point, if you will, as the greater metro region cascades without interruption 100 miles to the east.
Even more awesome to contemplate is that much of this landscape is duplicated to the south, as well, through Orange and San Diego counties. Indeed, nearly 7% of US population lives in the five large counties of southern California, with counties like San Bernardino having exploded from 200,000 people after WW2 to over 2 million today. Unfortunately, what was long accepted as a triumph of growth the past 60 years has now become a rather burdensome and exceedingly expensive system to maintain.
I bring up the case of Los Angeles because there is currently a rather tribal, oppositional, and, of course, very heated debate taking place in the US right now that roughly frames the solution to our problems as a choice between Austerity and Stimulus. For this debate to have meaning, we need to consider how economic policies will actually solve the problems currently endured in a mega-region like Los Angeles. Unemployment, food stamp use, and energy costs have leapt ever higher here since the 2008 crisis. Moreover, the seeds of these trends were already showing up before the infamous Autumn of 2008. How would either a new phase of belt-tightening or reflationary policy actually affect southern California?


When we witness the clash between the Austerity and Stimulus camps, on the surface there is the appearance that a true debate is taking place between diametrically opposed economists. For example, Austerity folks correctly note that our economy has been badly weighted towards consumption for some decades. They want to clear out the excesses, let the malinvestments fail, and elect an overall path of acute economic pain in order to reset the system. Stimulus advocates find such plans completely unnecessary, if not downright masochistic. Armed with a more humanistic approach, Keynesians want the government to run large deficits to help the private sector deleverage, which of course could take years.


A late 2010 article in the FT by Gavyn Davies illustrates this point. From the viewpoint of sectoral balances, government deficits show up as “savings” on the balance sheet of the private sector. Of course, this is a deduced accounting identity and may not actually tell us much at all about whether the private sector is becoming healthier. I will probe further into this data later on in the essay. But first, the Gavyn Davies chart from the Financial Times: The most important graph of the year: 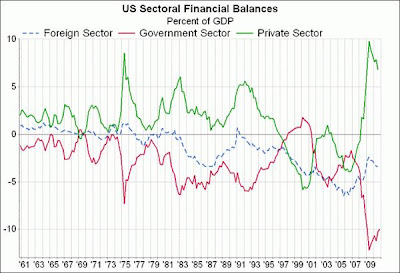 From the standpoint of a global macro economist, this is my nomination for the most important graph of the year. (See the end of this post if you wish to suggest alternatives.) It explains why the world’s largest economy, the US, has defied the pessimists by mounting a decent recovery in 2010. It also explains the behavior of the government deficit and shows why it has so far been easy to finance this deficit.
This is the essential argument made by Keynesians and adherents to MMT (Modern Monetary Theory). The US is a monopoly issuer of its own currency, and while inflation is a risk, default (per se) is not. While interest rates are low during deleveraging in the developed markets (DM), why not ease social and economic pain through further borrowing? After all, as the chart implies, the private sector will simply use this spending to repair its own balance sheet. Once a tipping point is reached, then the private sector can start taking on new credit, increasing tax revenues to government, and thus knocking down the debt incurred during the recession (or depression). What’s not to like?
Meanwhile, a great example of the austerity argument comes from Ron Paul, who recently released his plan to dismantle several federal government agencies, end the wars, and consequently chop a full trillion out of the annual budget deficit. Those in favor of such fiscal shock and awe are also persuaded by the view that government spending “crowds out” the private sector, and that government misallocation of capital nearly always exceeds the private sector’s similar mistakes.
Frankly, I am sympathetic to the sincere urges on both sides of this debate. Why not conduct reflationary policy indefinitely, at least as a humanitarian exercise? That is the plea I detected in a recent Martin Wolf column, Time to Think the Unthinkable and Start Printing Again. And also, why not end the wars, kill off a number of regulatory agencies, and promote the growth of small business? Is it not clear that the Project of Empire has greatly deprived the US domestic economy of badly need infrastructure, transport, and educational investments?
Internal to this debate, however, are a number of shared assumptions about the free market’s ability to allocate resources—and the economy’s ability to create supply of those resources—given the proper encouragement from both policy and price signals. Namely, both sides are in near-complete agreement their prescription will not only deliver the US economy back to growth, but also to trend growth–an eventual rejoining, if you will, to the pre-2008 trend.
This is partly why this essay kicks off with a recent quote from Ray Dalio, founder of Bridgewater Associates, who correctly identifies that the situation we face is perhaps much more complex than can be solved by an entrenched, oppositional argument. Dalio is known for describing the economy as a machine that operates according to certain realities. I agree. Moreover, Dalio has also suggested repeatedly that once you understand how the machine operates, you no longer have to be so surprised all the time. Indeed, the last three years have been a true marvel, given how many people refuse to accept we are not in a post-war recession, but rather a debt-deflation depression. Do economists know how the economy actually operates?
As tough as I can be on the economics profession, I actually think most economists understand very well how the economy operates. But here is the problem: Their understanding has been rendered increasingly obsolete by the emerging problem of resource scarcity and the resistance of our built environment to an easy or quick energy transition. In other words, economists typically no longer have a solution for Los Angeles, or for Southern California. Or, for that matter, the United States. 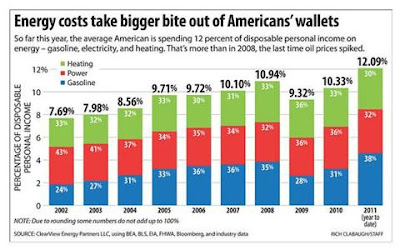 It’s quite clear that advocates on both sides of the current debate truly believe that the US can return to a growth path. Equally, they share an assumption that the supply of energy will adhere to a shift in the supply curve, which means simply that more supply or substitutes will be brought to market if the price level is sustained at high enough levels.
As the chart above shows, however, neither the steady advance of energy prices into 2008 nor the ensuing three years brought on new, usable energy sources that could reduce energy expenditures for Americans. But there is no mystery as to why Americans, having to spend more for energy and thus less on consumption and investment, have faced persistently high oil prices. We have a built environment that’s designed for liquid fossil fuels. And the expected shift in the supply curve for oil has not occurred. 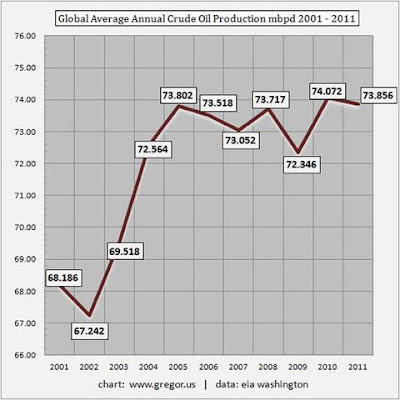 Earlier this month in the Harvard Business Review, in our response to Dan Yergin’s faith in future oil supply and healthy, industrial economies, There Will Be Oil, But At What Price?, Chris Nelder and I wrote:
Yergin wants to have it both ways: He wants us to believe that the market will bear the high prices required to keep supply increasing against the backdrop of mature fields — which are declining by 5% per year — while at the same time asserting that prices will remain low enough to engender continued economic growth. This, we submit, is impossible.
A rather serious problem in the ability of Developed Economies to coherently allocate resources started showing up well before the 2008 crisis. This status quo, made in part by policy mistakes, credit creation, and the energy limit, still remains today. Crucially, neither stimulus nor austerity will dislodge this status quo. Unless, of course, by austerity we mean to intentionally collapse the system, or if by stimulus we mean to engender a runaway inflation that will eventually yield the same result.
Even if you agree that the US economy has gotten itself into a badly misaligned place, ripping one trillion dollars out of its center is hardly going to “free up” resources or immediately engage the private sector in replacement activity. Equally, throwing more trillions at the economy in its current condition may serve to heighten, not dampen, inequality. As we have seen already, while stimulus may have put a break on systemic collapse, it has likely perfected the status quo. I agree very much with Paul Brodsky’s remarks earlier this month in his essay On Media Coverage of the Protestors:
For those of you who self-identify as progressives, you should re-think your defense of the current system. Money printing is a terribly regressive tax on the working and middle classes. Those with higher incomes and access to credit remain able to maintain their demand for inelastic goods and services, as well as maintain their ability to service debts, while lower wage earners, those with less access to credit, and those losing jobs as the real economy shrinks, are suffering. For those of you who self-identify as “free-market conservatives”, you should also re-think your support of the current system. “Free markets” are compelled to de-leverage presently, not to re-leverage. A more laissez faire regulatory environment and lower taxes do not address the fundamental problem, which is an abundance of credit that re-distributes wealth from the factors of production to the leveragers.
Precisely.
In Part II: How The Coming Decline Will Play Out, I provide fresh data on California’s economy and skewer the deductive accounting illusion that government deficits are allowing Americans to reduce their debts. I also show that free market failures are already occurring in the US economy. Austerity programs, from our current juncture, would do nothing but remove portions of the system at a time when the economy is not able to organically produce new economic flows. This would only serve to cripple the economy further, forcing it to contend with our crisis from an even lower starting point.
What the system needs instead is a more targeted transition process, not a radical simplification (Joseph Tainter’s term for collapse). Nevertheless, you can expect the sterile debate to continue, with the newest iteration of stimulus advocates now promoting NGDP (nominal GDP) Targeting. There is no question that capital markets, in the short term, absolutely love stimulus, because it allows existing economic flows to extend themselves temporarily. However, underneath this, all of the poor allocation of existing resources continues apace, and this is the central explanation for why the economy cannot create jobs:
The connection between needs and actual production is badly broken
To read the second part of this article you will have to pay by joining www.chrismartenson.com
Posted by seemorerocks at 11:41