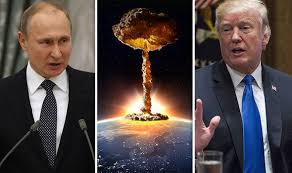 The anti-neoconservative Colonel Lawrence Wilkerson, who had been the chief aide to U.S. Secretary of State Colin Powell and had opposed America’s invading Iraq, spoke on March 2nd explaining how the U.S. and Russia are drifting ever-more-rapidly into World War III. He said it’s essentially the same way that England and Germany drifted into WW I: being sucked in by their entangling web of foreign alliances. However, as he sees it, the role that Sarajevo played to spark world-war in 1914, is being performed this time by Israel. Instead of the Bosnian Serb Gavrilo Princip igniting the war by assassinating in Sarajevo the Archduke Ferdinand of Austria, Benjamin Netanyahu is igniting this war throughout the Middle East, by escalating his campaign to conquer Shiites in Iran, Syria, and Lebanon — overthrowing and replacing the governments there (which would then become controlled by allies of the anti-Shiite Sunni regime in U.S.-Israel-allied Saudi Arabia), and also aiming ultimately to expand Israel itself, to take over Jordan so as to confirm biblical prophesy.

And, as Wilkerson sees it, Netanyahu is also fronting for the Saud family: the Israel lobby is fronting not only for Israel’s aristocracy, but for Saudi Arabia’s. (Whereas Israel works both inside and outside the U.S. Government to control the U.S. Government, the Sauds, which are the world’s richest family, work only inside the U.S. Government, by outright buying it; so, unlike the Jewish billionaires who control Israel, they don’t need acceptance by the American people; and each time the Sauds try, they fail at it.) However, since Wilkerson’s speech was being sponsored by organizations that oppose Israel’s lobbyists, most of it dealt with Israel’s side of the Israel-Saud alliance that controls U.S. foreign policies (especially in the Middle East). (The U.S. aristocracy’s hostility toward Russia is, however, its own; it is primary for America’s billionaires, but not for Israel’s aristocracy, and also not for the Sauds — both of which aristocracies are instead focused mainly against Iran and Shiites.)

Wilkerson thus criticized especially “where Israel is headed – toward a massive confrontation with the various powers arrayed against it, a confrontation that will suck America in and perhaps terminate the experiment that is Israel and do irreparable damage to the empire that America has become.” Here is how he described the likeliest “tripwire” for what would become global nuclear annihilation:

They want a Greater Israel for a number of reasons, security reasons, you know, the old biblical prophecies and so forth. So I think they’re going to try to keep this in the air to start with. You’re going to see some bombing. I think you’re going to see in the next six months, they’re going to take Lebanon on. They’re going to take Hezbollah on in Syria and Lebanon. When that doesn’t work or when Hezbollah present to them, as they did in July 2006, with some new options in terms of what Hezbollah can do to them and maybe even the Lebanese Armed Forces do too, it might get tricky. Then there might be armored formations, ground units, infantry and so forth. That’s when the door opens for general conflict.
There is a question asked, too, about the [U.S. military] base [recently placed in Israel]. Here’s why I think we put the base there. … We put the base there for the same reason we have tripwire forces in other places. We put the base there so that there can be no question in the minds of the American people when the president directs U.S. forces into Israel equipped to go into Syria because we will have been attacked. The disposition of that base is just sitting on an Israeli Air Base and we put the Stars and Stripes up and declared it a U.S. Air Base. It’s for Patriot batteries as far as I know. But it’s there and it’s U.S. territory. So, when missiles start flying or — God forbid — the RGC [Iran’s Republican Guard Corps] actually tries to put guerillas into Israel proper, then we are being attacked, too. So, when we go to Congress, if Trump feels like he has to go to Congress — he isn’t going to have to probably — Congress is going to be demanding that the president take action. …

If so, then the U.S. Government will be at war against Russia, too, not merely against Iran and Hezbollah. … So, the thing that ought to be happening right now is that the United States and Moscow, despite all this mess [Russiagate, Skripal, etc.] that’s been created between us, ought to be cooperating to bring the two parties that really need to talk — to talk, Riyadh and Tehran — and get them to deal with their problems diplomatically and then turn that diplomatic success on to the Syrian conflict which is being fueled principally by Saudi money with Prince Bandar in charge.

He’s saying that this isn’t at all an ‘Israel-versus-the-Arabs’ thing, nor even fundamentally a Russia-versus-America thing (at least not in the Middle East) but instead a Sunni-versus-Shiite thing, at root. And, he’s right. The fundamental Middle-Eastern conflict is intra-Islamic, not between religions. But (and he never talks about this; almost nobody does), it’s really between blocs of aristocracies, not really between different nations’ publics. In terms of publics, the American people are victimized by the American aristocracy and by its allied Saud family, and by its allied Israeli aristocracy; but America’s media are controlled by America’s aristocracy; and, so, hide these facts, in order to make these invasions by the U.S. possible — politically acceptable to the duped public (like Iraq, Libya, Syria, Yemen, etc., were).

Bandar is the person who was paying, out of his and his wife’s own personal checking accounts, flight-training etc. for at least two of the 15 Saudis who were preparing to do the 9/11 attacks. In 2017, U.S. President Donald Trump personally sold, to the Saud family, $350 billion in U.S. weaponry and training. That sale was the biggest part yet, of Trump’s plan to restore U.S. manufacturing. And basically, Trump is now owned by the Sauds, and this (in addition to his own billionaire Israel-backers) means that he needs to be gung-ho for invading Iran, and certainly not for overthrowing the Sauds. He needs to support aristocracies that are the chief enemies of the American public. This is realpolitik, in a world that’s controlled by psychopaths. It’s today’s world.
Wilkerson said, “We might have the stirrings of 1914 as utterly stupid as we now know those stirrings to have been.” But would this really be just “stupidity,” or, perhaps, something more — and worse? He evidently knows that it’s far more, and that it involves not only the Sauds and their agents, but also the Israelis and their agents:

This is Joseph Goebbels territory. Karl Rove [George W. Bush’s chief propagandist] is envious. The Foundation for Defense of Democracies as the heir to the Project for the New American Century, Bill Kristol’s Iraq-bound think tank, leaves that pack of wolves disguised as warmed over neocons lavishly funded by the likes of Paul Singer [one of Trump’s top financial backers]. It has even spawned the Institute for the Study of War. A fascinating Orwellian title if there ever was one [it’s run by former PNAC people]. It should be [called] the Institute for War.

I’ve been asked why is it that you ascribe to FDD and now the ISW such nefarious motives. I was asked this by the New York Times’ editorial staff when they published my op-ed on Iran a few days ago. My answer is simple. Because that is precisely what FDD is attempting to do. Just as Douglas Feith, undersecretary of Defense for Policy, Office of Special Plans, did in 2002 and 2003 for Richard Bruce Cheney to lead us in the war with Iraq.

If this is true, then the Skripal matter, and all of Russiagate’s pressures upon Trump to bring America to war against Russia and against Russia’s allies (such as Iran, Syria, and China), would fit also as being parts of that broader plan, which would fulfill the objectives both of the Saud family, and of Israel’s aristocracy — and, of course, of America’s aristocracy, which have long wanted to conquer Russia.

The NATO PR agency Atlantic Council announced on March 25th that, as the neoconservative Daily Starin London expressed the matter, “Defence experts at the Atlantic Council have now laid out the ‘significant threat’ from Russia on the edge of Europe.” Now that NATO has expanded right up to Russia’s very borders, NATO wants its populations to know that Russia is threatening NATO by massing troops and weapons on NATO’s borders. (It’s as if Russia had taken Mexico and then blamed America for being ‘aggressive’ and ‘threatening’ by doing defensive military drills on our own territory.) The next day, the Daily Star headlined “Vladimir Putin orders WAR DRILLS as Russia tensions ready to snap with West”. Then, on March 29th, they headlined “‘This is very rare’ Russia warship ‘to fire missiles SIX MILES off Sweden coast’”.

The aristocracies of Israel and of Saudi Arabia will likely have the support of the aristocracies in the U.S. and UK, in their planned war against Russia and its allies. Like WWI, and WW II, this is a joint enterprise; but, this time, unlike in WW II, America will be out to conquer Russia, not to conquer Germany. Russia is the nation that has, by far, the most natural resources; and aristocracies always value land more than they value the populations that are on it, for whatever they can exploit out of the conquered ones, especially because dealing with the natives can mean more trouble than it’s worth. For examples: native populations didn’t do too well in U.S., nor in Australia, nor in Africa, nor in Palestine. Russians aren’t the goal; Russia (the land) is. But, as usual, the aristocracies have first been knocking off the leaders of the allies of the country that’s the main target — such as in Iraq, and in Libya, and in Syria, and in Ukraine. Now, the allied aristocracies are getting ready to go in for the kill.

As regards the view from the opposite side, it was well summarized by Joe Hargrave in his recent “What Putin Wants Is The Most Important Issue Of Our Time”, in which he accurately represented what Putin has been both saying and doing.

And as regards Wilkerson’s recommendation: it was for the U.S. to abandon Israel, so that Netanyahu won’t be able to start WW III. (Wilkerson closed by saying: “The country that will have started it all, the relationship, unbalanced as it is that will make it possible, is Israel. That’s the danger we face.”) Of course, the Sauds won’t allow that, and they might even renege on their $350 billion U.S. weapons-purchase commitment if we did it. The Israel lobby would secretly carry the Sauds’ water on that, and the Sauds pay well for any service provided to them; so, those lobbyists would have access to virtually unlimited funds, some of which would, of course, ultimately find its way not only into politicians’ campaigns, but also into America’s ‘news’ media. Thus, corporations such as Lockheed Martin can get loads of free PR (sales-promotion), for American ‘nationalism’, which is the military-industrial complex’s form of internationalism.