"A Syrian law enforcement source told RIA Novosti that the army’s munition depots were hit, in what was most likely an airstrike." 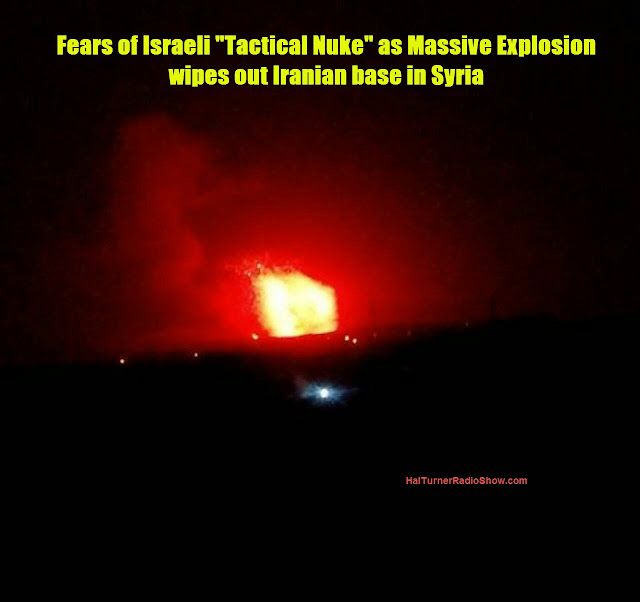 About one hour fifteen minutes ago, at around 3:40 PM Eastern US time, an utterly MASSIVE explosion took place at an Iranian base inside Syria. The photo above was taken from 5 kilometers (about 3 MILES) away, and well-into the explosion which "seemed to linger." There are now widespread BUT UNCORROBORATED rumors Israel used a Tactical Nuclear Bomb against the Iranian base.

The explosion was so intense, it registered as an EARTHQUAKE with the The European-Mediterranean Seismological Centre (EMSC), which is now reporting a Magnitude 2.6 earthquake at that site! (Link)

This is a very-fast-developing story. Updates within minutes. Check back. . . 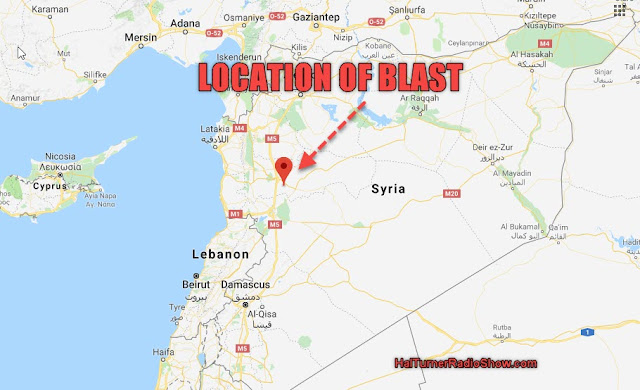 VIDEO -- 5:30 PM EDT --
The video below lasts only a few seconds. The cameraman told me he saw the "bright, white flash" then fumbled to get his camera started . . . capturing the rising blast AFTER the "flash." The cameraman also told me directly that when he started to see what looked like a "Mushroom cloud" rising up as the initial flames dissipated, he shut the camera off and ran like hell. This video was taken from about 5 kilometers (3.5 miles) away . . . that's how large the explosion was.

Russia and Syria are reviewing radar recordings. CONFLICTING INFORMATION coming in. Some reports claim Israeli jets were in the air at the time of the attack. Other reports say that radar picked-up a total of NINE missiles coming from the south, south of As-Suwayda as shown on the map below: 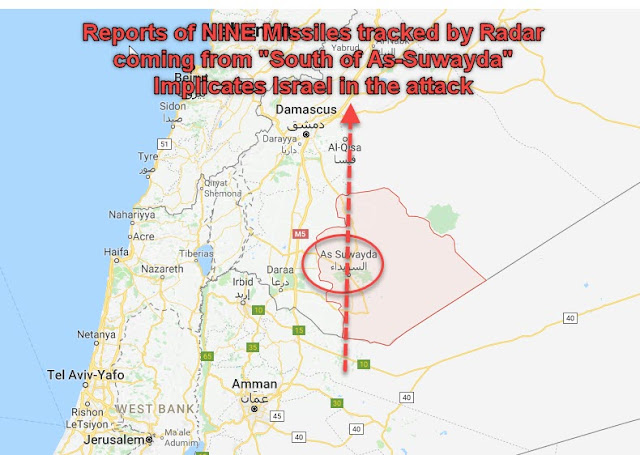 Other reports claim missiles came fromt he direction of the US Base at Al-Tanf.

Russia confirms "the origin of the attacks will be attacked in retaliation . . . ."

BREAKING:Syrian Sources saying that a huge underground Iranian missile facility has been hit and dozens of Iranian surface-surface missiles destroyed which have added to the massive explosions seen

Russia has WITHDRAWN it's "De-Escalation" teams from southern Syria.  "There is no need for them anymore; this is now a direct fight."
Syrian Government has confirmed that bases in Hama and Aleppo have been hit by enemy missiles.

Unconfirmed, so no official Syrian and or Iranian statement yet: dozens upon dozens of (mostly) Iranian soldiers (of all factions) have been killed tonight.
Blood of all types needed for the hospitals of Suqailabiya and Masyaf... There's a shortage and many wounded.


SANA CONFIRMS Syrian Army Fire Brigade station has been hit near the attack site at the Iranian Brigade 47 base, in an attempt to kill all firefighters and stop the fire being put out.

*Unconfirmed* reports that Israeli Prime Minister Netanyahu and his ministers are holding an emergency cabinet meeting at the Kirya military base in Tel Aviv following the alleged Israeli airstrike on an underground Iranian rockets depot in Syria.

The explosions at the Hama depot lasted for over an hour and a half, spreading to the nearby area and forcing some of the residents to flee their homes, Sky News reported, citing sources.

#BREAKING: First Video of MASSIVE explosions at Iranian/Hezbollah military base in #Syria after local sources reports Israeli warplanes in Syrian Airspace and confirm a hostile strike has taken place

Russian Military is changing all it's radio encryption; no longer communicating with US/Coalition or allowing us to hear what they're doing in Syria.  VERY BAD SIGN.

Information is just coming through on RT

Powerful explosions have been heard in the countryside of Hama and Aleppo provinces, the Syrian state news agency reports. The state media says military bases there were his by rockets launched by an unspecified enemy.

Ivan Sidorenko @IvanSidorenko1
#Syria #Hama Blood of all types needed for the hospitals of Suqailabiya and Masyaf... There's a shortage and many wounded.

- explosions were so powerful, an earthquake of 2,6 Richter was registered. This is likely due to the chain reaction of the munitions stored at the targeted sites; - all of the sites have strong Iranian presence, at least 57 Iranian fighters were reported dead, over 50 wounded;
3 replies9 retweets3 likes