An historic meeting between the leaders of the two Koreas, at war for 65 years

I am 61 years of age and the two Koreas have been technically at war for the entirety of my life.

The best way to celebrate this historic occasion is through some real analyis. 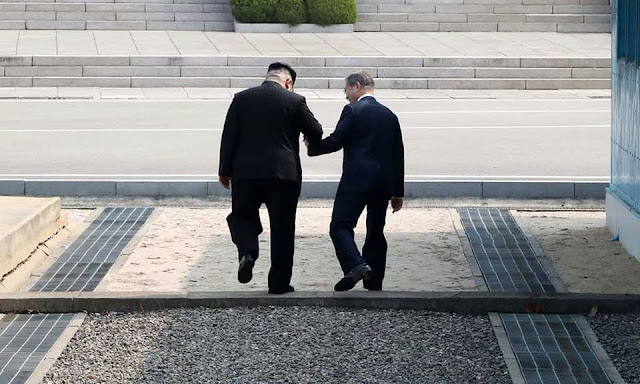 
They pulled the (Persian) carpet under Trump and the War Party.

Don't forget; this is still, and it always was, about the US and the Korean War.

Prime shadow roles: Xi, Lavrov and most of all Kim's sister - the ultra-smart Kim Yo-jong.

See also North Korea’s nuclear test site has collapsed ... and that may be why Kim Jong-un suspended tests

A Most Hopeful Korean Summit With Little Chance Of Final Success

At widely observed meeting today the leaders of North and South Korea took a step towards a peace agreement and maybe even a reunion of the partitioned country. 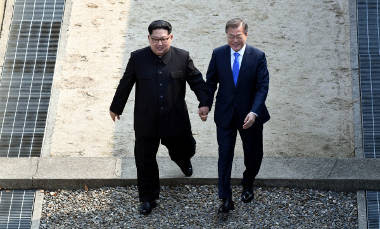 We have been here before:

Leaders of North and South Korea signed a treaty of reconciliation and nonaggression this morning, renouncing armed force against each other and saying that they would formally bring the Korean War to an end ...
...
Officials on both sides described the accord as the first step toward what they term the inevitable reunification of the Korean peninsula, but they conceded that it failed to deal with some of the most potentially dangerous issues dividing North and South, including Pyongyang's race to develop an arsenal of nuclear weapons. KOREAS SIGN PACT RENOUNCING FORCE IN A STEP TO UNITY

With surprising speed and warmth, the presidents of North and South Korea reached a broad agreement on Wednesday to work for peace and unity on their bitterly divided peninsula, the biggest step by either side to ease tensions in 50 years.
...
The general points agreed on included the need for reconciliation and unification; the establishment of peace; the commencement in August of exchange visits by members of divided families; and more cultural exchanges. THE KOREAN BREAKTHROUGH: THE OVERVIEW; KOREAS REACH ACCORD SEEKING RECONCILIATION AFTER 50 YEARS

Expectations for what could be achieved at the first summit meeting between the Koreas in seven years had been low. Worries that South Korea’s president  [...] would give away too much had been high.

But a declaration signed Thursday [...] contained a number of specific projects that could build closer economic and security ties between the Koreas, experts said. The North, in turn, appeared to have made some modest, though important, concessions to the South. Korean Summit Results Exceed Low Expectations

At a historic summit meeting, the first time a North Korean leader had ever set foot in the South, the leaders vowed to negotiate a peace treaty to replace a truce that has kept an uneasy peace on the divided Korean Peninsula for more than six decades, while ridding it of nuclear weapons. A peace treaty has been one of the incentives North Korea has demanded in return for bargaining away its nuclear weapons.
...
Mr. Moon also offered some capitalistic carrots during the talks, reminding Mr. Kim that South Korea had in years past promised huge investments to help improve the North’s road and train systems. Those agreements eventually collapsed as the North persisted in developing nuclear weapons. North and South Korea Set Bold Goals: A Final Peace and No Nuclear Arms 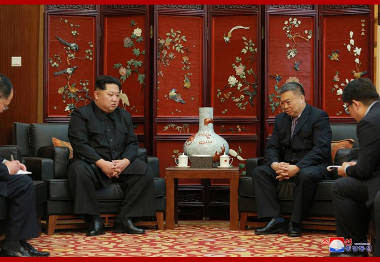 While many interests, unlike before, may now align and thus make a peace agreement more likely, spoilers remain.
The full text of the joint Panmunjeom Declaration for Peace, Prosperity and Unification of the Korean Peninsula is not much different than the previous summit declarations. But one of the agreed upon points is a stumble stone as it contradicts the Trump's administration aim of a unilateral de-nuclearization of North Korea:

South and North Korea agreed to carry out disarmament in a phased manner, as military tension is alleviated and substantial progress is made in military confidence-building.

A "phased manner" means that a significant number of U.S. troops will have to leave South Korea before the north gives up any significant nuclear capability.
(If there is a chance of an eventual reunion of north and south, a united Korea may well prefer to keep some nuclear weapons. There is nuclear armed China to the north and there is the former colonial overlord Japan which has the materials and capabilities to produce its own nuclear weapons over a long weekend or so.)
There are least three additional potential spoilers:
All three of these players have the capability to arrange false flag events that could sabotage any progress.

There is new momentum in Korea that makes a peace agreement or even a reunion more possible than ever before. But the interests of the various foreign parties can not be satisfied sufficiently to allow for a real break through.

The most amazing scene from yesterday was Kim and Moon,  unaccompanied, having a heart-to-heart on a bridge (itself symbolic). It is about half-way through the following video


A victory, not for Trump, the dotard, as claimed in the USA, but for Asia.

The Kim/Moon Summit is A Victory for All of Asia

Today was most of all a victory for the Korean people who under the leadership of Kim Jong-un and Moon Jae-in are now living in a country on the road to peace. While this journey has taken decades and while there is still more terrain to traverse, the pace at which things are progressing is nevertheless remarkable.

What is all the more meaningful though is that while the clear path to peace which Kim and Moon have embraced is a great leap forward for Korea, it is also a collective triumph for all of Asia. The division of Korea after 1945 was an artificial construct that paid more attention to the ambitions of the superpowers who fought Japan than to the Korean people whose homeland was occupied by Japan. A series of calculated steps to unduly influence the party political and ideological make-up of Korea by all the superpowers, but most notably by the United States, led first to division, then to war and after three years of unimaginable suffering, a return to division. Had all ideological, partisan and economic grievances of the Korean people been allowed to be fully and freely debated by the Koreans themselves, the unnatural division of a common people would likely have never occurred.

Korea was not the first time a colonial power has sought to artificially divide a peoples against themselves. The 1916 Anglo-French Sykes-Picot agreement and 1917’s Balfour Declaration by Britain continue to haunt an artificially divided Arab world, while a collapsing British empire helped sow the divisions which continue to haunt Indian Occupied Kashmir. Later, in 1954, the largely failed Geneva Conference paved the way for an artificial division of Vietnam which in turn led to a US war in the country that only ended in 1975. This is of course before one mentions the brutal French repression of Indochina as a whole, which continued to be haunted by post-colonial divisions until the 1980s (some would say until the 1990s).

While the Asia of the mid 20th century was rife with anti-colonial struggle, foreign invasion and civil wars which largely stemmed from colonial legacies, direct neo-colonial provocations or a combination of all of the above as was the case in the disputes between Malaysia and Indonesia and also Singapore and Malaysia in the 1960s, today’s Asia is vastly different.

Taken collectively, today’s Asia is the world’s centre for both innovation and production. While European living standards fall, Middle East living standards (with the big exception of Turkey) stagnate and African living standards continued to be pulled in a variety of directions, Asia is a place where on the whole, people are now more prosperous, healthy, secure and optimistic than at any time in recent memory. Thus, it is fitting that in such an age, the leaders of an artificially divided Korea should embrace each other at a time when both Korean states have a lot to be optimistic about in spite of lingering uncertainties.

Today, it would be largely unthinkable for the states of ASEAN to fight among each other as they did during the middle of the 20th century. Likewise, Japan and China are making progress on economic reconciliation while the prospect for war remains entirely remote if not non-extant. In South Asia, Pakistan is escaping the shadow of US dominance and is asserting itself as a productive member of the multiploar world whose economic future will be positively shaped by One Belt–One Road via the China-Pakistan Economic Corridor. While India’s ruling BJP remains at odds with a pan-Asian attitude, the ongoing meetings between Indian Premier Narendra Modi and Chinese President Xi Jinping gives at least a glimmer of hope that both India and China will be able to embrace positive elements of a relationship whose strains derive from the ‘divide and rule’ legacy of British colonial rule over South Asia. Russia’s healthy partnership with China is complimented by a Eurasian Russia’s ability to embrace new partners in places like The Philippines, Pakistan, Indonesia, Thailand and Turkey in western Eurasia, while retaining good relations with Vietnam and also India.

Throughout Asia, it can safely be said that the present is better than the recent past and the long term future will be far better than the lingering 19th and 20th century legacies of colonial humiliation. As Asia embraces the future, it has also learned to gradually embrace itself. The symbolism of Kim Jong-un and Moon Jae-in holding one another’s hands during a musical/multimedia performance at the end of their summit is emblematic of an entire continent that is learning to hold hands and walk together into a brighter future

It must be said that if not for China’s overwhelmingly positive influence as an economic and military superpower, much of what the world has seen would not be possible. While there are still some Asian states that refuse to embrace the natural position of China as the leading force in the wider Asian space, it is difficult to image a divided Korea taking the steps towards peace and unity that Kim and Moon have taken without China acting as a champion and de-facto guarantor of peace.

The divisions between left and right, political parties and nationalist suspicion are all parts of the colonial legacy that Asia must continue working to reject. China’s example as a country that is willing to work constructively with all partners in spite of any partisan lines, is a testament to the fact that Asian politicians can, will and ought to even more so, consider themselves as members of a wider Asian family first with all other considerations coming second.

If the US remained more influential in Asia than China, one could be sure that the spirit of anti-colonial harmony across Asia, including in Korea would not be flourishing. It is because of China’s leadership which respects the characteristics of each individual Asian nation that peace is beginning to take shape. Of course, in the specific case of Korea, the fact that both Moon Jae-in and Kim Jong-un have intensified their relations with Beijing, is a testament to China’s quiet strength against western voices that howl with discontent whenever Asian leaders act in a sovereign manner. Ultimately, China’s superpower status is paving the way for Asia to reject the machinations of those far from the heart of the Asian experience and instead become masters of their own destinies.

There is of course much to be done in Asia as a whole and in Korea, but the fact that things are progressing so fast and in so many positive directions is a credit to Asia as a whole, more than to anything else.