After the Syrian army liberated Douma, the next Takfiri held areas near the capital Damascus fell in short order. The Jaish al-Islam militants in Dumayr, north-east of Damascus, gave up without a fight. As usual by now the Takfiris were transferred to the north-western Idleb governorate held by al-Qaeda and other Turkish supported forces. The town of Dumayr controls the Damascus Baghdad highway. Capitulation negotiations in the nearby Eastern Qalamoun are ongoing.
The former Palestinian refugee camp Yarmouk is an upbuild suburb south of Damascus. One part is in the hands of al-Qaeda and another was controlled by an Islamic State group. Offers to evacuate the groups were made but rejected. Yesterday the Syrian army launched a massive artillery barrage and the Russian and Syrian air force dropped bombs onto the quarter. Today, just twenty-four hours later, the Takfiris gave up. The al-Qaeda aligned militants will be evacuated to Idleb, the Islamic State aligned group to the eastern Syrian desert.
With each elimination of a 'rebel' pockets Syrian army is gaining strength. Ten-thousands of soldiers who were needed to hold the Takfiri held areas around Damascus surrounded and under control are now free to attack elsewhere. Some of the militants who did not evacuate also joined the government forces.
The evacuation of many militants to the north-west might later turn up to be problematic. They will eventually come under Turkish control and could be used in another Turkish attempt to take Aleppo. But for now they are infighting. Al-Qaeda in Syria, now renamed to Hay'at Tahrir al-Sham (HTS) is fighting with other groups over control of the area. Over the last months about one thousand of the militants have killed each other, 3,000 were wounded and many of their heavy arms were destroyed. The Syrian government hopes that such infighting will continue for a while.
When all the surrounded areas within the government realm are consolidated the Syrian army will move towards the borders in the south. The area around Deraa up to the Israeli occupied Golan heights and the Jordan border is in the hands of various groups of militants. Like in the north rebel infighting is a frequent occurrence. Two days ago an Islamic State aligned group tried to wrest control over some villages east of Deraa from some other local militant group. Fighting has been ongoing since and both sides are losing strength. One wonders how many of these fights between rebels are instigated by undercover Syrian intelligence agents.
The greatest difficulty for the Syrian army operation in the south is the Israeli supply and support for a number terrorist groups in that area. Should Israel intervene in any form in the Syrian operation to liberate the area the fight can easily escalate into a larger war.
The destroyed city of Raqqa in the east is becoming a headache for the U.S. occupation force. The U.S. used unwilling Kurdish ground troops to attack the city. It was not much of an infantry fight. Anything that moved was simply bombed from the air or ground. The one U.S. artillery battalion that covered the city fired more than 35,000 155mmm rounds during the five month operation. Now some 80% of the buildings in Raqqa are completely destroyed. The rest is inhabitable. 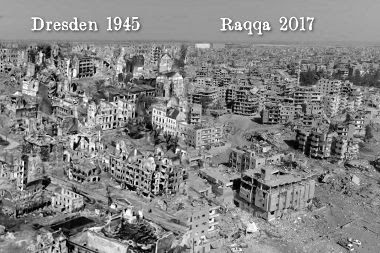 bigger
The city has no water and no electricity. The U.S. claimed that 2,500 ISIS militants were in the city when the fighting started. In the end the U.S. let at least 500 of those leave the city and move further east to fight the Syrian army. It also said that only 30 civilians were killed in its attack. That is of course nonsense. At least 2,000 dead bodies have been recovered so far and 6,000 more dead are recorded as still lying under the ruins. There will be more. The city administration has no equipment and money to recover them. The U.S. is unwilling to spend any money for the city it destroyed and the Kurdish warlords who now occupy the city are incompetent and have no interest to help its Arab inhabitants. The population that has returned is hostile towards the U.S. and the Kurds. It wants to get back under Syrian government control.
Further east at the Syrian Iraqi border and north of the Euphrates some 3-5,000 ISIS fighters live unmolested by U.S. air or ground attacks. The U.S. prevented Syrian government troops who control the area south of Euphrates from attacking the ISIS forces. But neither Syria nor Iraq can allow that ISIS pocket to survive. Yesterday a high level meeting was held in the operation room in Baghdad where Russian, Iranian, Syrian and Iraqi commanders arrange common operations against ISIS. Shortly thereafter an Iraqi jet attacked a ISIS command meeting near Hajin in Syria. The strike had Syrian government approval. Syrian government forces have rebuild a military bridge that will allow them to cross the Euphrates in a future operation. Several battalions, including auxiliary troops under Iranian command, are ready to attack. Will the U.S. bomb them when they cross the river? Or will it hold back and allow Iraqi air support for the Syrian troops?
The neo-conservatives are busy insinuating that Syria still has chemical weapon program and that it is distributed throughout the country.

U.S. assessments following the U.S., British and French missile strikes on Syria show they had only a limited impact on President Bashar al-Assad’s ability to carry out chemical weapons attacks, four U.S. officials told Reuters.
...
U.S. officials, who spoke on condition of anonymity, said the available intelligence indicated that Assad’s stock of chemicals and precursors was believed to be scattered far beyond the three targets.

This is of course just nonsense. Syria gave up its chemical weapons in 2013 and the OPCW confirmed that all weapon and precursor stocks were destroyed and all laboratories and production facilities dismantled.
This new fairytale of Assad's chemical weapons is designed to create a pretext for a another, more extensive bombing campaign against Syria. A fake pretext build on fake 'chemical attack' in Douma.
There is no evidence that any 'chemical attack' occurred in Douma. All the U.S., French and British government have are some videos created by known propagandists like the White Helmets who work for  those governments. The State Department's spokesperson finally acknowledged that:

MS NAUERT: Yeah. ... We recognize and appreciate and are very grateful for all the work that the White Helmets continues to do on behalf of the people of their country and on behalf of the U.S. Government and all the coalition forces.
...
I’ve just exchanged emails with him the other day. My understanding is that their work is still going on, and we’re proud to work with them.

In briefing to Congress, DNI, SecDef, and SecState provided zero real evidence. Referenced info circulating online. Which means either they chose not to provide proof to Congress or they don’t have conclusive proof that Assad carried out gas attack. Either way, not good.

After being stalled for five days the OPCW fact finding mission finally reached the area in Douma where the alleged 'chemical attack happened. It entered under protection of Russian military police.
The scientific research service of the German Bundestag published a report (pdf, German) today which concludes that the U.S. led attack on Syria on April 13 was evidently in violation of international law.