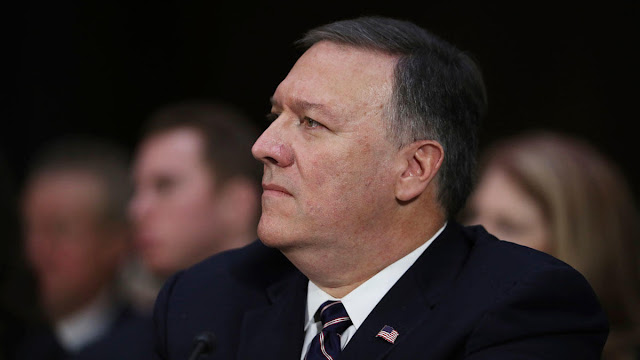 US Secretary of State Mike Pompeo has called for unity in the Gulf region during a visit to Saudi Arabia, his first foreign trip in his new role as the US' top diplomat.

Speaking at a joint press conference with Saudi Foreign Minister Adel al-Jubeir on Sunday, Pompeo said, "Gulf unity is necessary and we need to achieve it."

In advance of Pompeo's visit, US officials told reporters the US secretary of state would urge Saudi Foreign Minister Adel al-Jubeir, Crown Prince Mohammed bin Salman, and King Salman to resolve the Gulf crisis in a series of meetings on Saturday and Sunday.

US President Donald Trump initially appeared supportive of the Saudi-led initiative, while Pompeo's predecessor, the recently removed Rex Tillerson, blamed Saudi Arabia and its allies for the stalemate in resolving the crisis.

Officials said Pompeo called for an end to the blockade because the US believes it has enabled Iran to exploit disunity in the Gulf by enhancing its influence in Yemen and Syria, The Associated Press news agency reported.

Iran missiles
Speaking at the press conference, Jubeir called the meeting "fruitful". He said the US and Saudi Arabia had "identical viewpoints" on regional "challenges", including Iran's behaviour in the region.

He called for extra inspections of Iranian nuclear sites and imposing new sanctions on the country for "violating international law".

Pompeo arrived in Riyadh on the heels of a missile attack by Houthi rebels that killed one person in Jizan, southern Saudi Arabia, on Saturday. Senior US officials said they blame Iran for smuggling the missiles into Yemen.

Speaking on the condition of anonymity, US officials told reporters the administration is seeking to counter Iran's missile programme as part of a strengthened Iran nuclear deal, formally known as the Joint Comprehensive Plan of Action (JCPOA).

Trump has previously said he will withdraw the US from the JCPOA - which he has called the "worst deal in history" - unless "a better option" is presented to him by May 12, which is when the US president faces a deadline to decide whether or not to renew the agreement's prescribed sanctions relief for Iran.

Pompeo on Sunday called Iran "the greatest sponsor of terrorism in the world".

"Iran destabilises this entire region. It supports proxy militias and terrorist groups. It is an arms dealer to the Houthi rebels in Yemen and Iran conducts cyber-hacking campaigns. It supports the murderous Assad regime, as well," he said.

The former CIA director was sworn in as the US top diplomat on Thursday and flew to Brussels for a visit to NATO's headquarters on his first full day on the job. On Saturday, he started a brief tour of the Middle East.