More on the Skripal case

UPDATE: Stupidly I had forgotten this vital confirmation from Channel 4 News (serial rebel Alex Thomson) of the D Notice in place on mention of Pablo Miller.

Back then I did not realise what I now know, that the person being protected was Pablo Miller, colleague in both MI6 then Orbis Intelligence of Christopher Steele, author of the fabrications of the Trump/Russia golden shower dossier. That the government’s very first act on the poisoning was to ban all media mention of Pablo Miller makes it extremely probable that this whole incident is related to the Trump dossier and that Skripal had worked on it, as I immediately suspected. The most probable cause is that Skripal – who you should remember had traded the names of Russian agents to Britain for cash – had worked on the dossier with Miller but was threatening to expose its lies for cash.
ORIGINAL POST: This comment from Clive Ponting, doyen of British whistleblowers, appeared on my website and he has now given me permission to republish it under his full name:

I have been reading the blogs for some time but this is my first post. Like Craig I was a senior civil servant but in the ministry of defence not the fco. I had plenty of dealings with all three intelligence agencies. It seems to me that the reason none of the MSM are doing any investigating/reporting of the Salisbury affair, apart from official handouts, is that the government have slapped a D-Notice over the whole incident and it is not possible to report that a notice has been issued.
Here is another theory as to what happened. The Russians pardoned Skripal and allowed him to leave (spy agencies have an understanding that agents will always be swapped after an interval – it’s the only protection they have and helps recruitment). In the UK Skripal would have been thoroughly debriefed by MI6 and MI5 (his ex-handler lives near Salisbury). If at some point they discovered that Skripal was giving them false information, perhaps he was told to do so by the FSB as a condition of his release, lives may have been endangered/lost. If he also was also involved in the ‘golden showers’ dossier then elements in


the US would have a reason to act as well. The whole incident was an inside job not to kill him, hence the use of BZ, but to give him a warning and a punishment. The whole thing is being treated as though the authorities know exactly what went on but have to cover it up.

I meant to add that the policeman who ‘just happened’ to be around was almost certainly the special branch ‘minder’ who was keeping Yulia under surveillance. The media are not allowed to mention the existence of a D notice.

Those of us who have been in the belly of the beast and have worked closely with the intelligence services, really do know what they and the British government are capable of. They are not “white knights”.
I would add it has been very plain from day one that there is a D notice on Pablo Miller.


There has been no recent reporting on the Skripal case in which a British-Russian double agent and his daughter were poisoned in Salisbury, England. There even seem to be attempts to change the public record of the case.

The British government alleged that the Skripals were poisoned by Novichok, a deadly nerve agent, and blamed Russia for it. There are stiill many open questions to ask but the British media, otherwise not afraid of 'door stepping',  are curiously uninterested. We already noted in early April that the British press was throwing Novi-Fog™ onto the public. It was repeating outrageous and illogical claims from "security services" but did no genuine reporting on the Skripal case.

Some photo editor made sense of what the "security services" said and introduced an April 5 London Times piece with a picture of a likely source of the alleged Novichok poison: 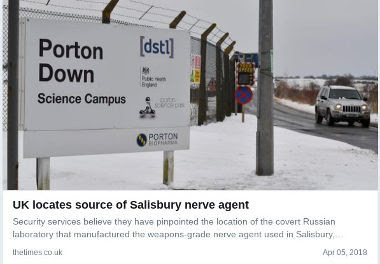 Now the former British ambassador Craig Murray quotes Clive Ponting, another former senior civil servant, who suspects that the British government issued a D-Notice. Such a notice forbids British media to report on an issue. Murray also points to a tweet by Channel 4 correspondent Alex Thomson from March 12 in which Thomsen mentions a D-Notice specifically related to Mr. Skripal's MI6 handler: 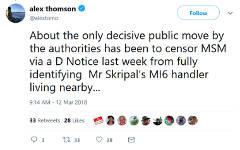 bigger
The D-Notice attempt Thomsen mentioned was too late as some media had already reported the name of the Skripal's MI6 handler. We spelled it out on March 8.

One Pablo Miller, a British MI6 agent, had recruited Sergej Skripal. The former MI6 agent in Moscow, Christopher Steele, was also involved in the case. Skripal was caught by the Russian security services and went to jail. Pablo Miller, the MI6 recruiter, was also the handler of Sergej Skripal after he was released by Russia in a spy swap. He reportedly also lives in Salisbury. Both Christopher Steele and Pablo Miller work for Orbis Business Intelligence which created the "Dirty Dossier" about Donald Trump.

We early on suspected a relation between the  "Dirty Dossier" and the Skripal affair:

Here are some question:

If there is a connection between the dossier and Skripal, which seems very likely to me, then there are a number of people and organizations with potential motives to kill him. Lots of shady folks and officials on both sides of the Atlantic were involved in creating and running the anti-Trump/anti-Russia campaign. There are several investigations and some very dirty laundry might one day come to light. Removing Skripal while putting the blame on Russia looks like a convenient way to get rid of a potential witness.

Whistleblower Clive Ponting, quoted by Murray, now also suspects that the Skripal case was an 'inside' job that followed from the 'dirty dossier' fakery:

If [Sergej Skripal] was also involved in the ‘golden showers’ dossier then elements in the US would have a reason to act as well. The whole incident was an inside job not to kill him, hence the use of BZ, but to give him a warning and a punishment. The whole thing is being treated as though the authorities know exactly what went on but have to cover it up.
...
I meant to add that the policeman who ‘just happened’ to be around was almost certainly the special branch ‘minder’ who was keeping Yulia under surveillance. The media are not allowed to mention the existence of a D notice.

There is not only a very curious silence in British media about the Skripal case, but there seem to be active attempts to remove certain material about the case from the public.
In 2017 investigative journalist Dilyana Gaytandzhiev reported about massive air transports of weapons to Syrian 'rebels' under diplomatic cover and got fired over it. On April 26 she made another interesting find:

The #Skripals were allegedly exposed to the drug #Fentanyl, not the #Novichok nerve agent, according to information obtained from the UK Clinical Services Journal https://www.clinicalservicesjournal.com/story/25262/...

The Clinical Services Journal piece Gaytandzhiev had found is from March 5 2018, the day after the Skripal incident in Salisbury. In its original version it read:

Salisbury District Hospital declared a “major incident” on Monday 5 March, after two patients were exposed to an opioid.
...
It followed an incident hours earlier in which a man and a woman were exposed to the drug Fentanyl in the city centre. The opioid is 10,000 times stronger than heroin.

The #Skripals were exposed to #Fentanyl, not #Novichok. After I published this information yesterday (26.04.) the Clinical Services Journal redacted it today  https://www.clinicalservicesjournal.com/story/25262/...

I personally read the CSJ story after Gaytandzhiev's first tweeted it on the 26th.  I can confirm that it was changed.

The top line in the CSJ quote above now reads:

Salisbury District Hospital declared a “major incident” on Monday 5 March, after two patients were exposed to what is believed to be an opioid.

The second line has been changed to:

It followed an incident hours earlier in which a man and a woman were exposed to a substance in the city centre.

All reference to Fentanyl as cause of the Skripal illness in a March 5 article has been removed between April 26 and April 27.

Archive.org has the original version as collected on April 26: 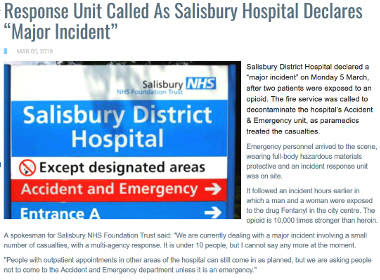 bigger
The changed version as now available at the Clinical Services Journal site: 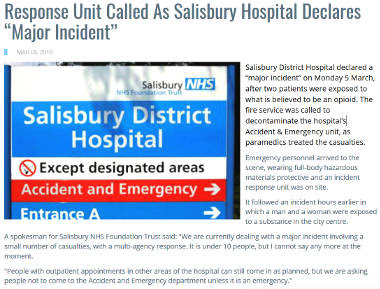 bigger
One wonders why such a tiny magazine would bother to change an old story after some journalist tweeted about it.

The CSJ was not the only outlet which mentioned Fentanyl. The local Salisbury Journal reported it on March 5 and the piece is still up:

Police declared a major incident after a man in his 60s and a woman in her 30s were found unconscious on a bench in the shopping centre on Sunday.

Emergency services at the scene suspected the substance may have been a powerful drug called fentanyl, but nothing has yet been confirmed.

They were taken to Salisbury District Hospital where they are in a critical condition in intensive care.

In November 2017 the Salisbury Journal had reported about an unrelated fenatanyl overdose case. In 2016 Salisbury had a spikein Fentanyl OD cases. The local emergency services were surely aware of the symptoms and effects of such a substance.
Another local news site, Devon Live, headlined on March 5: Major chemical incident declared after 10 people vomited fentanyl and two are critically ill

It is understood that police suspect fentanyl, a synthetic opiate many times stronger than heroin, may have been involved. A man and a woman are in a critical condition and up to 10 other people are involved.

Officers and paramedics were called to The Maltings shopping centre in Salisbury after the man and a woman fell ill. The woman, who was unconscious, was airlifted to Salisbury district hospital at about 4.15pm, while the man was taken by ambulance.
...
It was recently reported that fentanyl has claimed the lives of at least 60 people in the UK over the last eight months.

The British press is now totally silent on the Skripal case. Craig Murray and another former senior civil servant suspect that the government gave order to not report on the issue. They also suspect, as we did early on, that the case is related to the fake "Dirty Dossier" which the Clinton campaign ordered up to use it against Donald Trump.

It is not understandable why the British government would give a silencing order if, as the government alleges, Russia caused the incident.

Why is no public investigation by the media allowed? Where is Yulia Skripal and what is the health status of Sergej Skripal? Why have they been silenced?

---
Previous Moon of Alabama posts on the Skripal case: