I can’t really argue with this version of things 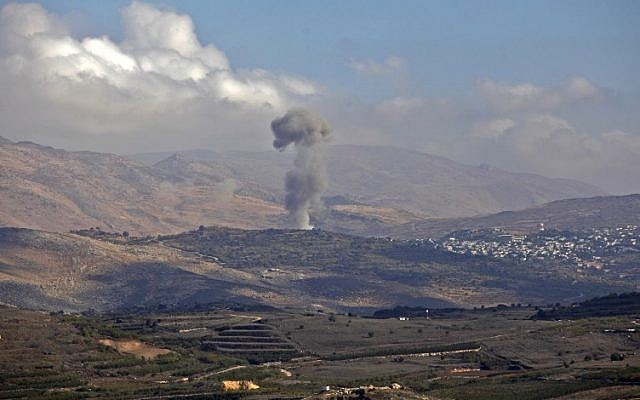 Illustrative: Smokes billows from the southern Syrian Druze village of Hadar on November 3, 2017, as seen from the Israeli Golan Heights. (AFP/JALAA MAREY)
The Israeli army on Monday attacked a Syrian army artillery position after a mortar shell struck the northern Golan Heights, in an apparent case of spillover fighting from Syria’s civil war, the army said.

According to the Israel Defense Forces, the mortar shell exploded near the border fence earlier on Monday. It appeared to have been fired at Israel accidentally during fighting between Syrian dictator Bashar Assad’s military and rebel groups in the region.

In response, the Israeli military targeted an artillery cannon belonging to Assad’s army, which was in the same area of the Syrian Golan Heights from which the mortar shell was fired, the IDF said.

As a rule, Israel targets Assad’s army in retaliation to any attack coming out of Syria, regardless of who was behind it and whether it was unintentional or deliberate.

“The IDF sees the Syrian regime as responsible for every action in its territory and will not tolerate violations of the sovereignty of the State of Israel and the security of its citizens,” the army said in a statement.

The minor exchange came during a period of increased tension along the northern border as Jerusalem and Tehran continue to trade verbal blows following a deadly airstrike on an alleged Iranian facility in central Syria, which has been attributed to the Israeli Air Force. Israel officially will not comment on the strike.

Once frequent, these types of spillover fire incidents have waned in recent months, in light of a ceasefire between Assad and the rebels.

However, as the dictator takes control over the last pockets of rebel resistance elsewhere in Syria, he is expected to turn his sights on the Syrian Golan Heights.

This is of particular concern to Israel, which borders the region, as Iran and its proxies are liable to fight with Assad against the Golan rebels and potentially use the area as an additional front from which to carry out attacks against the Jewish state.

Israel strike Back Against Syria

Israel claims it will retaliate against the Syrian Military for mortars fired into its territory regardless if the Jihadist are the ones doing this. Why does Syria bare the responsibility of the enemy especially an enemy the Israeli Government has admitted to assisting in medical aide?