From the zionist media 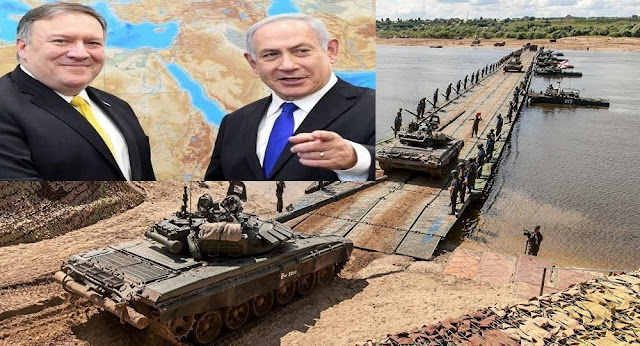 As US Secretary of State Mike Pompeo and Prime Minister Binyamin Netanyahu sat down on Sunday, April 29 in Tel Aviv to discuss the Iranian threat, a Russian-backed Syrian force struck across the Euphrates to capture a string of US-backed fortified Kurdish SDF villages. This incursion of a key US area of influence region in eastern Syria, if confirmed, would rip up a key element of the US-Russian de-confliction zones accord and provide Iran with a springboard for a leap up to the Iraqi border.

Pompeo, on his first Middle East Trip as Secretary of State, reiterated in Tel Aviv – as he did in Riyadh earlier Sunday – that the nuclear deal will need to be fixed or it would be abandoned by President Donald Trump’s on May 12. Standing alongside Netanyahu, the secretary backed Israeli efforts to counter Iran in Syria. He said the US is committed to “rolling back to the full range of Iranian malign influence in Syria,” specifically mentioning “Iran’s missile systems, its support for Hezbollah, its importation of thousands of Shiite fighters into Syria.” Pompeo added, “We strongly support Israel’s sovereign right to defend itself.”

DEBKAfile: This was taken as a US green light for Israel to take on the elements threatening its security from Syria. The secretary also stressed that the US would continue to fight ISIS and not tolerate the Assad regime using chemical weapons.

Our military sources add: If the Syrian push into the US-held region is confirmed, it will tell the Trump administration and its new secretary of state that while they were busy arranging for US troops to leave Syria, Moscow was expanding its support for Iran to move in and deepen presence in that country.

Russia, Iran and Syria were not deterred when their attempt last year to cross the Euphrates was repulsed by the US contingent with heavy casualties inflicted on Russian forces. The same coalition tried again on February 10 and were again thrown back by the US air force. But our military sources report that, on April 13-14, shortly before the US-UK-French missile strike on Syria’s chemical weapons sites, Russian forces were seen transferring to the Syrian army upgraded bridging equipment for their new attempt on Sunday. A few hours after the Syrian army’s claims of success, however, Kurdish troops said they had mounted a counter-offensive and forced the Syrian forces “far away” from the territories they captured.

Pompeo winds up his three-day Middle East tour in Amman before returning home to Washington.


A Syrian cargo flight from the Iranian capital Tehran landed at a military airport in the city of Hama in northern Syria on Sunday, less than twenty-four hours before a series of explosions rocked a nearby army base late Sunday night, which state media blamed on a missile attack.

Data from flight tracking website Flightradar24 shows the Syrian Air Ilyushin Il-76T landed in Hama just past midnight on Sunday, after taking off from Mehrabad Airport,

Tehran's dual military and civilian airport.The same aircraft, capable of carrying around 40 tons of cargo, made a similar flight from Tehran to Hama on April 22, according to the data, and another to a location near Aleppo earlier on the same day.

Between January and April, the aircraft flew almost exclusively on the main cargo route between Tehran and Damascus.

In recent weeks Israeli and US officials have drawn renewed attention between the copious cargo flights between the two countries and suspicions that they are carrying weapons bound for Syrian President Bashar Al-Assad's regime and Hezbollah, the Iran-backed Shiite militia.

Iran and Hezbollah have backed Assad in the country's seven-years-long civil war.

Opposition sources in Syria said the explosions in Hama occurred at a military base widely known to house and be a recruiting center for Shiite militias and home to Iranian personnel, although this is yet to be confirmed.

Syrian state television and the Syrian Observatory for Human Rights said a missile attack was to blame, but did not identify the source or precise targets.

Earlier this month an Israeli security source noted that the flights are being watched, and on Thursday US Secretary of Defense James Mattis said he agreed that Iran has upped weapons shipments to Syria with the aim of preparing an attack on Israel.

Asked by a reporter if he agrees that "weapons shipments from Iran to Syria are for the purpose of striking Israel?" Mattis replied: "I can't think of any other purpose for them right now."On Wednesday, CNN reported that US intelligence agencies are also worried about what exactly Iran is stuffing into the bellies of the jets.

The officials said they were alarmed by an uptick in flights since an alleged Israeli strike on an Iranian air base in Syria on April 8.Iran has repeatedly vowed to exact revenge for the air attack, which reportedly targeted Iranian military drones but also killed several military personnel.

While the air bridge between Iran and Syria dates back to the earliest years of the conflict, the flights are gaining more attention as Israel seeks to curb what is describes as Iran's growing military presence in the war-torn country.

Flight tracking data reviewed by i24NEWS shows that several airlines form the pillars of the airlift, which some analysts say are front companies for Iran’s Revolutionary Guard Corps (IRGC), the vanguard of Tehran’s deployment in Syria.

Syrian Air, formally known as Syrian Arab Airlines, is sanctioned by the United States and the European Union.