"Russian Bots": The 'Newspeak' of the Guardian

How The Guardian Fulfills George Orwell's Prediction Of 'Newspeak' 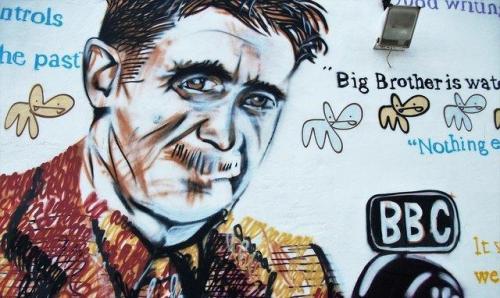 Authored by Eric Zuesse via The Strategic Culture Foundation,

On Sunday April 15th, Britain’s Guardian bannered "OPCW inspectors set to investigate site of Douma chemical attack” and pretended that there was no question that a chemical attack in Douma Syria on April 7th had actually occurred, and the article then went further along that same propaganda-line, to accuse Syria’s Government of having perpetrated it. This ‘news’ story opened [and clarificatory comments from me will added in brackets]:

UN chemical weapons investigators were set on Sunday to begin examining the scene of a chemical attack in the Syrian city of Douma, which had prompted the joint US, French and British strikes against military installations and chemical weapons facilities near the capital, Damascus.

The arrival of the delegation from the Organisation for the Prohibition of Chemical Weapons (OPCW) came as the Syrian military announced that it had “purified” [no source provided, but this — from 7 March 2018 — is the only source that existed prior to the April 14th missiles-invasion of Syria, and its meaning is very different: the region of eastern Ghouta, of which Douma is a part, after a two-month campaign that killed nearly 2,000 civilians [no source provided as regards either the number, or that all of them were ‘civilians’ and that none of them were jihadists or “terrorists"], following years of siege.

“Units of our brave armed forces, and auxiliary and allied forces, completed the purification of eastern Ghouta, including all its towns and villages, of armed terrorist organisations,” the general command statement said.

In other words: the Guardian’s ‘journalist’ had substituted the word “clear” by the word “purify” and did this after having already asserted but not documented, that the Government had just completed “a two-month campaign that killed nearly 2,000 civilians.”

But by the time that the reader gets there to “purification … of armed terrorist organisations," the reader has already been indoctrinated to believe that Syria’s Government is trying to “purify” land, or perpetrate some type of ethnic-cleansing.

Later, the article asserts that,

"The OPCW mission will arrive in Douma eight days after the chemical attack, and days after the area fell to the control of Russian military and Syrian government forces. That delay, along with the possibility of the tampering of evidence by the forces accused of perpetrating the attack, raises doubts about what the OPCW’s inspectors might be able to discover.”

However, a fierce debate is being waged over whether this was not any real “chemical attack” but instead a staged event by the jihadists in order to draw Trump back into invading Syria. In other words: any journalistic reference yet, at this time, to the event as “the chemical attack” instead of as “the alleged chemical attack" is garbage, just as, prior to the guilty-verdict in a murder trial, no journalistic reference may legitimately be made to the defendant as “the murderer,” instead of as “the defendant." That is lynch-mob ‘journalism’, which Joseph Goebbels championed.

It’s a big difference, between the lie, and the truth.

Another story in the April 15th Guardian was "Pressure grows on Russia to stop protecting Assad as US, UK and France press for inquiry into chemical weapons stockpiles” and this one pretended that the issue is for “Russia to stop protecting Assad,” who is the democratically elected and popular President of Syria, and not to stop the invasion of Syria since 2011 by US and Saudi backed foreign jihadists to overthrow him.

Furthermore, as regards “press for inquiry into chemical weapons stockpiles,” the real and urgent issue right now is to allow the Organization for the Prevention of Chemical Weapons (OPCW) into Douma to hold an independent and authoritative investigation into the evidence there. Russia pressed for it at the U.N. Security Council and the US and its allies blocked it there. But the OPCW went anyway — even after the US-allied invasion on April 14th — and this courageous resistance by them against the US dictatorship can only be considered heroic.

That type of ‘news’-reporting is virtually universal in The West, among the US and its allied governments, which refer to themselves as ‘democracies’ and refer to any Government that they wish to overthrow and replace by their own selected dictator, as ‘dictatorships’, such as these regimes had referred to Iraq in 2003, Libya in 2011, Syria forever, and Ukraine in 2014.

The Guardian, “Russian bots” and the dehumanisation of dissent

Heather Stewart, The Guardian’s chief stenographer political editor, has copied and pasted a press release written a new article all about “Russian bots”. The trouble is she doesn’t seem to know what either of these words actually means.


The article – headlined “Russia spread fake news via Twitter bots after Salisbury poisoning – analysis” – is a direct lie from the outset, as it offers absolutely no “analysis”.

Instead she does this:


Russia used trolls and bots to unleash disinformation on to social media in the wake of the Salisbury poisoning, according to fresh Whitehall analysis. Government sources said experts had uncovered an increase of up to 4,000% in the spread of propaganda from Russia-based accounts since the attack,– many of which were identifiable as automated bots.

She simply directly quotes Whitehall via anonymous “sources”. Does she interrogate the veracity of these claims? No. Does she offer evidence to support them? Of course not. Does she question the agenda behind them? I doubt she even remembers how.

Ctrl-C, ctrl-V. It must be true the government says so.

This is modern media in a nutshell. This new take on the meaning of “journalism” has hurt the world in general and press in the specific. Refusal to abide by its rules has pushed important voices out of the mainstream – the careers of many decent people of principle – John Pilger and Seymour Hersh for example – are forced out into alternate sources.

Kowtowing to the government line has its own cost though – the unquestioning acceptance of government authority has a price – and very often it’s looking incredibly foolish.

Now, before we refute the specifics Ms Stewart’s bizarre claims, let’s take a look at the definition of a bot, from wikipedia::


An Internet Bot, also known as web robot, WWW robot or simply bot, is a software application that runs automated tasks (scripts) over the Internet. Typically, bots perform tasks that are both simple and structurally repetitive, at a much higher rate than would be possible for a human alone.


Simply put – bots are automated, internet based software programs that do simple repetitive tasks faster and more efficiently than humans. It’s not a difficult concept.

Heather clearly doesn’t know exactly what a “bot” is, and perhaps even worse, can’t even be bothered to do some incredibly easy research to familiarise herself with the term. The government says so, so it must be true. Copy. Paste.

So, who are these non-bots, you ask? Well…apparently there’s millions of them, but Heather only mentions two:

One bot, @Ian56789, was sending 100 posts a day during a 12-day period from 7 April, and reached 23 million users, before the account was suspended. It focused on claims that the chemical weapons attack on Douma had been falsified, using the hashtag #falseflag. Another, @Partisangirl, reached 61 million users with 2,300 posts over the same 12-day period.

Now, anybody who follows alt-news sites on twitter – or who pays attention to the Syria situation – is probably more than familiar with these two names.

Ian56789 is not a bot. Anybody who follows him can see that. Is he Russian? There’s nothing to indicate that, he claims to be a Brit living in the US, and his English is perfect. Take a look at this completely randomly chosen tweet as an example:

Fake excuse by @GuardianHeather printing pure lies about me.
Basic Journalism says you at least do basic research validating what you are about to print from at least two credible sources.


There is nothing whatsoever to indicate he is “Russian”…except his opinions. Still, his account was suspended, because saying the wrong things has you branded an enemy in the land of the free. Thankfully he has since been reinstated.


However that pales in comparison to the absurdity of listing Partisangirl as a “Russian bot”. Partisangirl – or Maram Susli – is a real person. There can be no disagreement on that front. She gives interviews, she makes videos, there are hundreds of photographs of her. Only slightly less ridiculous than the idea she’s a “bot”, is the idea she’s “Russian”. She’s Syrian-Australian woman. She has a Syrian name, and a Syrian flag in her bio and talks – almost exclusively – about Syria.


Here's a real,live Russian bot (English accent and all)

The UK govt claimed they identified me as a #Russianbot cause I made "2300 tweets in 12 days." My analytics show only 980 tweets in 28 days. Their statistics weren't even numerical correct. This is the "British intelligence" we are supposed to believe about #Salisbury & #Syria.

I'm The '#RussianBot' The Government And Media Warned You About

Posted by seemorerocks at 15:28